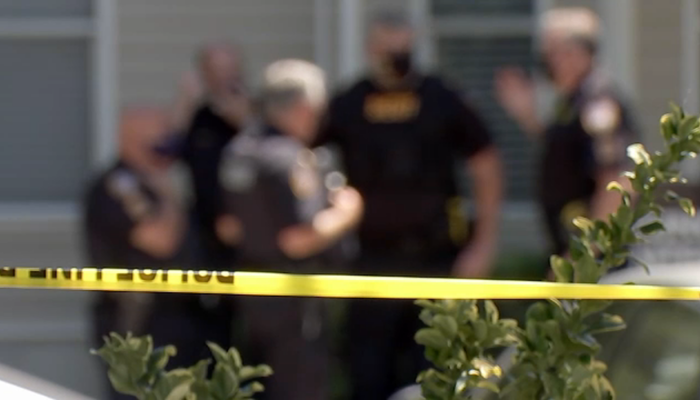 
HOUSTON, Texas (KTRK) — Darlene Solis was in her bathroom putting on makeup when police said her ex-boyfriend shot her multiple times in a jealous rage. She never saw it coming.

Solis, 33, was found dead Thursday morning on the bathroom floor after her dad conducted a welfare check at her apartment in the 300 block of West Little York Road.

It was the second homicide at the complex within a month and adds to the growing number of shooting deaths this year throughout Houston.

“We’re up about 42 percent on the year. Obviously our staffing hasn’t increased 42 percent, so we’re doing more with less, but we’re doing it and that’s the important thing. It will get done,” HPD detective Sgt. Matthew Brady told 13 Investigates’ Ted Oberg. “It’s overwhelming. It’s fast. We’re having to just go nonstop.”

So far in 2020, there have been 117 murders, according to the Houston Police Department. Murders are up 46 percent from last year, when there were 80 cases during the same time frame of January 1 to May 5.

And while 2019 saw a five-year low in homicides, HPD executive assistant chief Troy Finner said Tuesday, homicides are at a five-year high.

“We’re never going to give up and we’re going to do whatever we have to do to get these numbers back down,” Finner said.

13 Investigates takes a look at the increase in murders so far this year compared to the same time period in 2019. On the map below, blue dots indicate 2019 homicides, and the red dots represent this year.On mobile device? Click here for a full screen experience.

The COVID-19 shutdown has given officers the ability to move around the city faster as they investigate cases, but Finner said that is one of the only benefits from the stay-at-home order.

“Officers’ lives are in danger, not only from traditional violence on the streets and hazards of the job, but the pandemic itself,” Finner said. “We are not in a job where we can just say we’re going to socially distance. We gotta respond. If it’s a crime scene, yeah, we put on our PPEs and we try to do the best that we can, but the bottom line is we’ve got to respond.”

From drug deals gone bad and aggravated robberies to shootings at apartment complexes and convenience store parking lots, homicides in Houston saw the bulk of its increase during the time frame of Gov. Greg Abbott’s stay-at-home order from March 13 through April 30. Harris County extended the stay-at-home order in place through May 20.

On the Northside, there were four murders last year during that time frame — that number doubled this year. Southeast and Southwest Houston also have seen an increase in homicides.

Homicides in the county are up 48 percent, according to the Harris County Sheriff’s Office. There have been 34 murders so far this year, compared to only 23 during the same time frame last year.

“April was particularly hard,” Brady said. “The uptick was rapid. We had 37 murders. That’s over one a day. We don’t get that, so it might have started in March, but it certainly went off in April.”

Unlike Solis’ case, which was related to domestic violence, a majority of this year’s homicides are drug related, Finner said. There has been a 49 percent increase in drug-related crimes this year.

Homicides were already on the rise before the COVID-19 pandemic hit, but one connection HPD made between the crime and pandemic is drugs.

“I really thought we would see an increase in domestic violence murders with people being locked up together and we have not seen that, so I don’t know if people are just thinking that the police are busy doing other things or if people are just under stress because of the COVID-19. We really don’t have any idea,” Brady said.

The same vehicles, buses and trains that move people, move drugs and with the usual modes of transportation limited, drug dealers and buyers have become more violent as supplies decrease.

“When supply is low and demand is high, territory becomes more competitive,” Finner said. “You have less drugs out there so people who do it for a living … if I can say that I’m going to sell these drugs to somebody, but I’m going to take the drugs and the money, it becomes violent because I haven’t seen too many drug dealers that walk around without a gun.”

Finner said many of the homicide cases involve people who knew one another. Even in drug cases it wasn’t stranger-on-stranger crime. He said that’s why it’s important for residents to avoid dangerous behavior, like drugs and gambling.

“The last thing you want to do is have your family members going through a death when it’s just — it’s so totally senseless,” Finner said. “Don’t hang out with the wrong people at the wrong time and don’t engage in selling drugs and other risky behavior where you are increasing your chances of becoming a victim of homicide and then your family can’t even properly bury you right now because of COVID-19.”

Brady’s been at HPD for 10 years, and during that time he’s accumulated hundreds of cases that still need more work. The recent uptick in homicides is only adding to that pile.

Lately, the sentiment is “we hope nothing else comes in today,” Brady said.

Houston’s homicide detectives just want the pace to slow down.

“There’s a good chance that between Friday and next Saturday, the following Saturday, I’ll get another one,” Brady said. “We would just hope that things would slow down to give us a chance to catch our breath and get caught up.”

Solis’ death was one of Brady’s latest cases. Solis had recently let her ex-boyfriend, Corey Lewis Campbell, live with her after he said he had nowhere else to stay.

Campbell, 31, was allegedly angry Solis had already moved on and was seeing someone else. Police said he shot her point-blank and left the weapon at the scene. An ATF E-Trace background check of the firearm showed Campbell purchased it in 2012 in North Carolina, where he’s from.

“We don’t know if it was just simply panic. Maybe he wanted to get caught. We’re not really sure,” Brady said.

Charges were filed within 24 hours, and with cooperation from various agencies, Campbell was pulled over on a traffic stop in Winston-Salem, North Carolina, around the same time HPD got a warrant for a murder charge signed.

He was arrested Friday in Forsyth County, North Carolina, and awaits extradition to Houston.

Sgt. Matthew Brady said despite the quick turnaround in the case, he still has about 80 hours’ worth of paperwork to complete, in addition to the open homicide cases he’s still working.

“We have suspects identified and in three out of the four of my past murders, but it’s a lot of work and the cases have involved a lot more follow-up work and we’ve had to interview a lot more people and we’ve had to pull surveillance videos and it’s just going slower,” Brady said. “We feel really confident that we’ve got suspects identified in these cases and now it’s just the legwork to put those to bed.”

With the increase in homicides, the department continues to spend overtime, conducting targeted patrols in hotspot neighborhoods.

“A lot of these criminals, and I call them the trigger pullers, they’re driving to and from in their vehicles with the guns, so if we get an opportunity to stop them on traffic. That’s what we’re going to do” Finner said. “We’ve got to look at ways that we can send these numbers down, but we also look at ways that we can prevent it and take guns off the streets, removing them for those criminals.”

Brady said the city goes through phases where murders spike and go back down. He’s not sure why there’s been such an increase this year and thinks it would have been difficult to predict.

Detectives are being assigned cases quicker than normal, and with that the forensics science center is also having to process more evidence faster, too.

“We’re handling it. That’s what we do,” he said. “The citizens need to know that just because we are overworked and overwhelmed does not mean we slow down or stop. We just have to work harder and longer.”

Have a tip for Ted Oberg? A problem to solve? Get in touch with us on our tip page, or send a tip below. (On mobile? You can open our form by tapping here.)