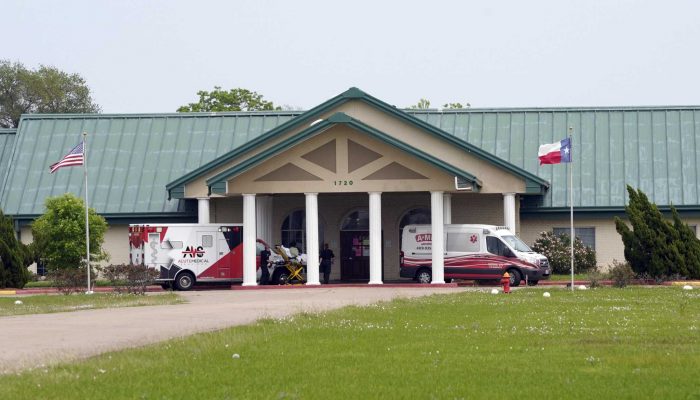 More than 40 percent of coronavirus-related deaths in Texas have been linked to nursing homes and assisted-living centers — a spike from just 30 percent two weeks ago, according to a Houston Chronicle analysis of state data.

The review found that 33 percent of deaths related to COVID-19 as of Tuesday were connected to nursing homes, with an additional 9 percent linked to assisted-living facilities.

Nationally, the death rate for the 23 states that report long-term care fatalities is 27 percent, according to the Kaiser Family Foundation.

Gov. Greg Abbott this week directed the state’s health and human services agency to develop additional guidance for nursing homes. Despite loosening some restrictions on nonessential businesses, Abbott said Monday he would maintain protections on “the most vulnerable” people, including those at nursing homes and assisted-living facilities.

“We will also redouble our efforts to protect seniors in nursing homes, and other senior living facilities,” Abbott said. “That includes things like better infectious disease protocols at senior living centers. The bottom line is this: The more we do to protect our vulnerable senior population, the faster we can safely open business in Texas.”

Although Abbott has not followed the lead of Maryland’s governor in creating “strike teams” to respond to nursing home outbreaks, officials in Galveston and Harris counties have announced new initiatives, from increased testing in Galveston County to a strike team in Harris County.

As of Monday, at least 231 coronavirus-related deaths were in nursing facilities, according to the Texas Health & Human Services Commission. At least 59 deaths were in assisted living facilities. There were a total of 688 deaths statewide linked to the new coronavirus as of that date, according to state data and Chronicle reporting. Two weeks ago, there were a total of 94 deaths at such facilities.

In anticipation of Abbott’s phased reopening of the state’s economy, Houston-area health agencies on Monday detailed plans to ramp up coronavirus testing at nursing homes and in at-risk communities with large numbers of minorities, which have been disproportionately affected by the virus.

Experts say the state needs to be similarly aggressive in testing staffers and residents at long-term care facilities.

“Statewide, our HHSC survey teams are on site in nursing facilities and actively investigating and monitoring them to assess compliance with all applicable health and safety rules,” said Kelli Weldon, a spokeswoman for the Health and Human Services Commission, in a written statement.

Amanda Fredriksen, associate state director for advocacy and outreach at AARP Texas, said this protocol is too reactive, particularly as many people infected with coronavirus are asymptomatic carriers. She said nursing homes should be testing staff on a weekly basis and ensuring that any employees that have regular direct contact with residents are wearing sufficient personal protective equipment.

“The emphasis on testing is good, but the frustration still is that the trigger point (for investigation) is a positive case in the facility,” Fredriksen said. “It just seems like at that point, the damage has already been done.”

On the recommendation of federal officials, Abbott banned most visitors more than a month ago from nursing homes in an attempt to protect residents from infection. Later, the prohibition was extended to assisted living centers.

Nursing homes typically take the temperatures of employees, but experts concede those screenings won’t reveal someone not showing any symptoms of COVID-19. On Monday, the Centers for Disease Control and Prevention updated its criteria to guide testing to include asymptomatic people in long-term care facilities as priorities.

Patty Ducayet, the state’s long-term care ombudsman, said the poor quality of certain nursing homes throughout the state, even before the coronavirus outbreak, could be skewing the overall numbers.

“Pandemics are something we should have been preparing for, and we know facilities will probably learn an incredible number of lessons from this experience,” Ducayet said, adding that she’d like to see a statewide measure barring nursing home employees from working at more than one facility.

Officials have said such cross-pollination likely contributed to an outbreak at a Texas City nursing home where more than 80 residents and staff tested positive and at least one resident died.

To curb the spread, Lee said, the state needs to increase transparency and release names of facilities with outbreaks, not just data on infections and deaths, as well as mandate testing of all residents and staff when there is a confirmed case in a facility.

“The state needs to take more of a leadership role than they have been,” Lee said. “Because the nursing homes are not slowing the curve, stopping the spread. All we’re doing is we’re seeing an escalation in outbreaks and deaths, and they need help.”

The state has not disclosed the number of deaths by county in nursing homes and assisted living centers.

New federal rules require nursing homes to report coronavirus cases to the CDC to help the federal government better track outbreaks and work to prevent them. The facilities were already required to report that data to state and local health officials.

Assisted living centers won’t be subject to those rules, however, because unlike nursing homes, they’re not federally regulated and instead are overseen by the states.

Local officials are stepping up testing efforts in the absence of a more defined state role.

Beginning Tuesday, Harris County Public Health will deploy a “strike team” to test for COVID-19 at nursing homes and other community living settings. For now, epidemiologists, social workers and clinicians will only able to visit one nursing home per day until more resources become available.

Philip Keiser, the county’s local health authority, said four different nursing homes have now reported outbreaks, with 21 of the county’s 24 deaths coming from those facilities. The health district has retested many nursing home residents after two weeks — the point at which patients should recover from the disease, per the CDC — and found that many were still infected.

“What I’m concerned is going on,” Keiser said, “is that these people are still potentially infectious, and then you’ve got people crowded together in a nursing home, and even though everyone’s doing the best they can to (isolate) it, it still might not be enough.”

Jordan Rubio contributed to this report.

About the Author: By Nick Powell and Taylor Goldenstein, Staff writers