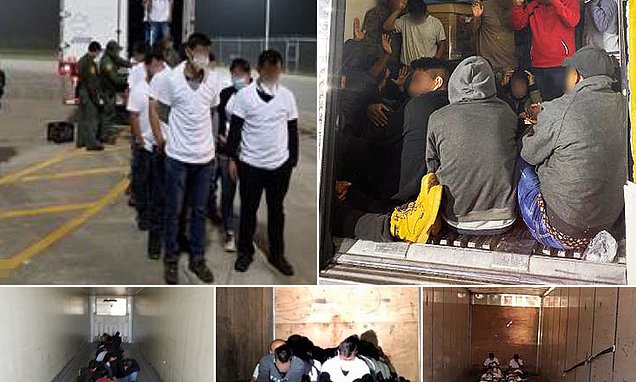 
More than 492 migrants, who paid smugglers up to $12,000, were found hiding inside tractor-trailers in ‘life-threatening conditions’ while crossing the Mexico-Texas border in the last two monthsBorder Patrol agents found that migrants are paying human traffickers between $6,000 to $12,000 to cross the Mexico-United States border in trucksMore than 492 migrants have been found hiding inside tractor-trailers since March 21 on the Rio Grande Valley and Laredo sectors in TexasThe federal immigration agency has intercepted 28 trucks in the region since COVID-19 policies were imposed at the border Here’s how to help people impacted by Covid-19

By Adry Torres For Dailymail.com

The price of crossing the Mexico-Texas border over the last two months has proven to be costly for more than 492 undocumented migrants since restrictive COVID-19 travel policies were put in place.

Since March 21, U.S. Customs and Border Protection has intercepted 28 tractor-trailers ferrying undocumented immigrants along the Rio Grande Valley and Laredo sectors in Texas as smugglers pay thousands of dollars to reach the United States.

‘The risk posed by these tractor-trailer loads increases dramatically during the COVID-19 pandemic,’ said Rodney Scott, Chief of the United States Border Patrol.

‘In recent weeks, our agents have discovered more than 492 people concealed in these dangerous and life-threatening conditions.’

The United States and Mexico have limited land border travel, temporarily restricting all non-essential travel across its borders to ensure that ‘food, fuel, healthcare and life-saving medicines’ are delivered to people on each side of the border on a daily basis.

Both countries categorize non-essential travel as ‘tourism or recreational in nature.’

Each of the migrants that Border Patrol agents found hiding inside a truck in Laredo, Texas, on April 5 wore t-shirts that were marked with a digit or a letter so that they could be identified by their smugglers

CBP said that is has intercepted 28 trucks smuggling undocumented migrants since March 21. The federal immigration agency said individuals are paying human traffickers $6,000 to $12,000 to be smuggled over the Mexico-Texas border

CBP estimates that human traffickers are now charging anywhere from $6,000 to $12,000 for each individual that seeks to unlawfully enter the United States at a time in which the Trump administration continuously stymies migrants seeking asylum to legally enter via the southern border.

Last Thursday, Border Patrol agents stopped two tractor-trailers during a period of two hours in Laredo, Texas. Officers detained 48 Mexican migrants, including two minors, who were hidden inside a truck driven by a U.S. citizen during a checkpoint on Interstate Highway 35.

A hour later, CBP agents manning U.S. Highway 83 stopped the second trailer, operated by an American individual, that was transporting 10 migrants from Mexico and Ecuador.

Migrants are lined up outside of a tractor-trailer that was being used to ferry them across the U.S.-Mexico border

A group of migrants from Mexico, Guatemala, Ecuador and El Salvador unlawfully entered the United States via the Mexico-Texas border on April 5

Border Patrol agents broke into a locked, stolen trailer last Monday during a checkpoint on Interstate 35 north of Laredo, rescuing 49 migrants from Mexico, Guatemala, El Salvador and Honduras who were concealed and had ‘no means of escape.’

CBP has constantly warned undocumented migrants of the dangers that come along with being locked inside trailers despite the large sum of money they continue to pay human traffickers.

Authorities in July 2017 discovered more than 100 migrants stuck inside a trailer at a Walmart parking lot in San Antonio. At least 10 died and another 39 were rushed to the hospital for dehydration. The truck driver received a life sentence.

‘This smuggling tactic is putting lives at risk – the lives of the migrants, our agents, and the American public – all for the sake of profit,’ Scott said.

CBP found 32 migrants, including a child, from Mexico, Guatemala, Ecuador and El Salvador who unlawfully entered the United States via the Texas-Mexico border April 4

CBP intercepted a tractor-trailer ferrying 36 undocumented immigrants in Laredo, Texas, on April 30. The individuals are nationals of Ecuador, Guatemala, Honduras and Mexico and were taken into custody for processing. The truck driver, a United States citizen, was arrested

About the Author: Adry Torres