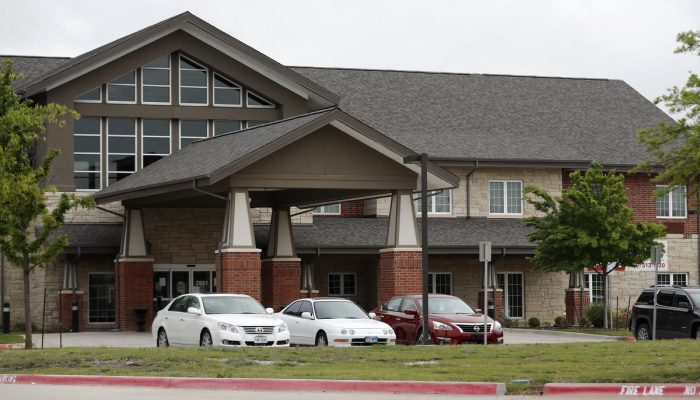 DALLAS (AP) – Eight residents of a Dallas-area long-term care facility have died this month after testing positive for the coronavirus, a spokeswoman for the facility said Thursday.

They were among 13 residents who have tested positive for COVID-19 at The Oxford Grand in McKinney, said spokeswoman Coryanne Graham.

Graham said all of the residents who have tested positive for the virus live in the memory care portion of the facility for patients with dementia, separate from assisted-living residents.

The facility was notified on March 29 that an employee had tested positive for the coronavirus, Graham said. Five employees have now tested positive. None were showing symptoms prior to testing.

The coronavirus has ravaged nursing homes across the U.S., with more than 10,000 deaths reported and many facilities saying they have struggled to access tests. Graham said The Oxford Grand hasn’t had difficulty getting hold of tests.

The Texas Health and Human Services Commission said it has received reports that 164 residents of nursing facilities have died of the virus and 43 more with the virus died in assisted-living facilities.

The commission’s spokeswoman, Christine Mann, said the agency is investigating The Oxford Grand to assess its health and safety compliance.

Graham said they’re following state and federal guidelines, and precautions include all staff being screened when they enter the building and all residents being screened for symptoms three times a day. She said employees wear personal protective equipment.

Graham said the first resident with COVID-19 died April 5 and the latest died Tuesday. The eight who have died range in age from 80 to 93, and all had significant underlying health conditions.

For most people, the new coronavirus causes mild or moderate symptoms, such as fever and cough that clear up in two to three weeks. For some, especially older adults and people with existing health problems, it can cause more severe illness, including pneumonia and death.

The Texas Department of State Health Services said about 22,000 cases of the coronavirus have been reported in the state and 561 people have died.