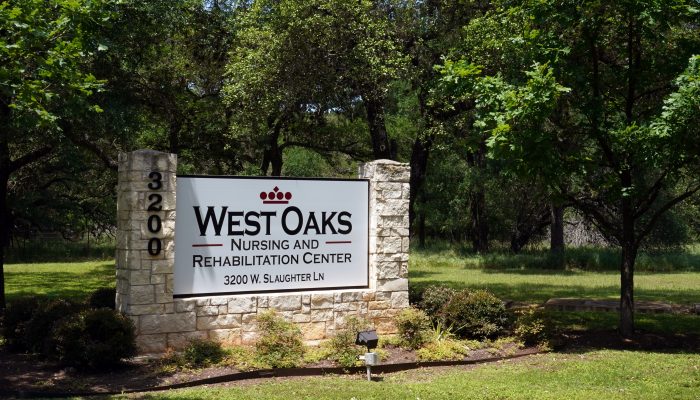 
“I have a resident. Her temperature is going up and her oxygen is dropping quite low, so the doctor wants to send her out,” the caller from Riverside Nursing and Rehabilitation Center says in a 911 call April 21. “She’s COVID-positive. … She’s running a temp of 102. Her oxygen level’s dropping.”

911 calls for medical attention obtained by KUT provide a picture of how COVID-19 spread inside two Austin long-term care facilities, one of the sectors of society hit hardest by the outbreak.

The log confirms at least three patients at Riverside in Southeast Austin have tested positive for COVID-19. In calls, staff suspected at least two other patients had the virus or were being treated as if they did.

KXAN previously reported two cases of the virus had been confirmed there. In one 911 call from Riverside, a 90-year-old woman who had tested positive for COVID-19 is sent to South Austin Hospital. The call log says her vitals were dropping and that she was turning blue and not completely alert.

Callers also describe a separate section in the facility set up for COVID-19 patients. “There is a covid ward in nursing home,” the log reads.

KUT has verified that a second home, West Oaks Rehabilitation and Healthcare Center, has had at least half a dozen patients test positive for COVID-19. 911 calls from the facility show at least six patients have tested positive since March 1.

This includes an 83-year-old woman who was found deceased on site after staff performed CPR, according to a call. Staff told the call-taker the resident had tested positive for COVID-19.

According to the log, patients were being monitored for the virus as early as March 13. By April 11, EMS crews were told West Oaks was a “HIGH RISK FACILITY…PLEASE USE FULLLLL PPE.”

Austin Public Health revealed this week there are several nursing homes with large outbreaks of the coronavirus, but said it could not name the facilities for medical privacy reasons. It did say 12 residents and a health care worker had died at one facility.

That would indicate the nursing home is West Oaks, which confirmed a staffer died last month.

Regency Integrated Health Services owns both Riverside and West Oaks. The company would not directly confirm whether its facilities were among the unnamed nursing homes on the city’s list, but said it is following Center for Disease Control and Prevention guidelines in reporting cases to federal and state authorities.

Ladner also said Austin Public Health would be testing all staff and patients this week.

In a letter posted on its website, CEO Larry Deering said the company began preparing in early March for what he called “one of the most challenging times in history for every health care facility across the country.”

He said Regency started closing its facilities to nonessential visitors in mid-March and secured personal protective equipment (PPE) for all staff at each of its facilities across Texas. He said the facilities had created “isolated spaces for the assessment and treatment of all COVID-19 patients” and designated specific staff to deal only with these patients.

“We are also in constant communication with all our facility administrators ensuring new protocols are understood and enforced and that every staff member is well equipped with the tools they need to stay healthy so that they can continue to care for our patients,” Deering wrote.

On March 30, Austin Public Health announced it was setting up two facilities to house COVID-19 patients from nursing homes who don’t need to be hospitalized, one in Travis County and one in Williamson County. It also implemented a rule that if two or more patients in the same facility test positive, the facility cannot accept new or returning patients until it has been cleared by APH.

“There’s a substantial number of employees out because they have COVID-19,” Escott told the Travis County Commissioners Court this week. “[The strike teams are] not only meant to fill in the gaps created by those workers who are missing, but also to add additional staff in hopes that we can gain better control of the situation in those facilities.”

Another team has been sent to Williamson County, where officials recently confirmed two clusters of outbreaks of nursing homes.

The challenge for health officials now is keeping COVID-19 out of nursing homes altogether. By slowing the spread of coronavirus in the community, it can help buy time for prevention efforts.

“We have a situation whereby the time a strike force gets to a nursing home, it is probably too late to stop, at least, a big part of the transmission,” Lauren Ancel Meyers, a professor of biology and statistics at UT Austin, said. “[Buying time allows us to think] about how do we resource nursing homes right now preventatively and not just react to outbreaks.”

Got a tip? Email news@kut.org.