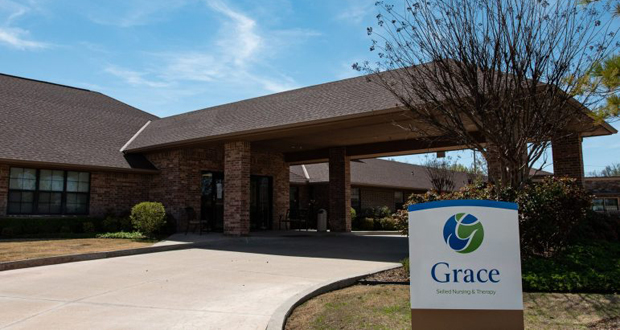 Grace Skilled Nursing and Therapy was the first nursing home in the state to report that residents had tested positive for COVID-19.
(Whitney Bryen/Oklahoma Watch)

Inspectors found no violations in the 10 nursing homes with the largest outbreaks, in which 698 residents and staff members have tested positive and 95 have died.

Those facilities, which account for about half of all COVID-19 deaths and infections in state long-term care centers, were found by inspectors to be in compliance with Centers for Disease Control and Prevention guidelines.

An Oklahoma Watch review of state data shows health officials conducted more than 200 infection control inspections to ensure those who care for the elderly and infirmed are following updated protocols.

Only one facility has been cited for violations.

An inspector spent three days recording violations last month at Hillcrest Nursing Center in Moore, where the staff was treating COVID-19 patients without medical-grade masks or face shields and residents were roaming the halls without masks.

Esther Houser, who has spent 40 years advocating for nursing home residents in her official capacity with the state and now as a volunteer, said the lack of violations shows egregious apathy among state leaders and puts Oklahoma’s most vulnerable population at risk.

“This is a death penalty for the residents and that requires extreme accountability by the agency that’s charged with protecting them,” said Houser, who worked as the state’s long-term care ombudsman until she retired in 2014.

Inspectors paid three visits to Bartlesville Health and Rehabilitation Community, where nearly all of the facility’s residents have tested positive for COVID-19, according to Health Department reports. Its 92 confirmed cases among residents and staff are the most for any state long-term care facility. Twenty people have died.

On March 19, April 13 and April 21, an inspector spent hours observing workers at the Bartlesville facility as they cleaned and cared for patients. Managers and staff were interviewed about hand hygiene and how often they changed masks, gloves and gowns. No violations were recorded from any of those three visits.

Officials from Bartlesville Health and Rehabilitation Community did not respond to calls and a Facebook message requesting an interview.

Many facilities with the worst outbreaks have been inspected more than once. Health officials said in an email that repeat visits are part of the state’s ongoing monitoring practices and not an indication of poor care.

State officials declined requests to interview inspectors and supervisors. But in an email, Assistant Deputy Commissioner James Joslin said inspectors have visited more than 90 nursing homes, assisted living facilities and veteran centers with at least one confirmed case of COVID-19 and others without any cases.

Inspection reports are available online and searchable only by the facility. There are more than 650 long-term care facilities in Oklahoma, including 308 nursing homes, making it difficult to confirm how many inspections have been completed since the onset of COVID-19 and whether the state focused its efforts in any geographic areas.

Oklahoma Watch requested investigation reports in April using the state’s open records law. After initially refusing the request, the state pointed back to the website and did not provide the documents.

A review of inspection data on 91 facilities with COVID-19 cases found that many of the reports are not yet published to the website. Even available reports lack specifics about what inspectors did or found.

The state reports all violations to the Center for Medicare and Medicaid Services, the federal oversight agency. All cited facilities are required to provide a written plan of correction to the state and have the option to dispute the violations.

In April, Oklahoma Watch reported that masks, gloves and gowns were scarce in nursing homes, making it difficult to follow expanded CDC protocols. Federal data released Thursday shows facilities across the country are still struggling to maintain adequate supplies and face staff shortages – both of which could constitute infection-control violations under COVID-19 standards.

Houser, who now works with legislators to develop policies to protect aging Oklahomans, said the reports show a “ridiculous lack of enforcement.” She said violations are likely being overlooked or intentionally left off the record in facilities where the majority of residents contracted the virus.

Families are unable to check on their loved ones in person because visitation is still suspended statewide to ensure the coronavirus is kept out. Some facilities are not allowing hospice worker visits to minimize the risk of exposure. And staff shortages are widespread due to infections, quarantines and constantly changing protocols.

With fewer eyes on resident care, Houser said, it is more important than ever for health officials to ensure residents are protected.

“If there’s a sense that nobody’s looking or nobody cares, then they’re not going to change anything,” she said.

But state officials and industry representatives say the virus can be unavoidable even with the best infection control practices in place.

Dr. David Dosa, an associate professor of health services, policy and practice at Brown University who has spent his career studying nursing homes and disasters, said the virus is difficult to detect and control because many patients don’t experience symptoms. The virus is new, which amplified contagion. And without proven treatments or a vaccine, exposure in these facilities can come down to “the luck of the draw,” he said.

“We’re finding out that it’s a little bit random where it’s showing up,” said Dosa, who studied the effect of the coronavirus epidemic on nursing homes and published guidelines for protecting residents in March. “I don’t think there’s a huge relationship with the quality of care and where we’re seeing outbreaks.”

Joslin said inspectors can only record what they see while they’re on-site. Video training on CDC guidelines, weekly information calls to check in with providers and infection control consultations are in place to help ensure facilities are implementing best practices, he said.

A single failed inspection report and a nursing home manager who was present for three inspections provide details into the state’s process.

An inspector recorded nine violations at Hillcrest Nursing Center in Moore, where 18 residents and staff members have tested positive for the virus and one has died. The report was uploaded last week to the department’s website.

It was 5:25 p.m. on May 9 when an inspector notified the director of nursing at Hillcrest that her residents were in immediate jeopardy.

A state inspector spent four consecutive days at the facility, according to the report. Staff told the inspector they had received little or no training on infection protocols put in place for COVID-19. The inspector watched as staff entered the building without mandatory screenings for symptoms and temperature checks. Staff members working with residents who were positive for COVID-19 were seen wearing the same protective equipment around patients without the virus. One nurse told the inspector that staff members had to share masks.

The facility was cited for failure to:

• Implement infection prevention and control to prevent the onset and spread of COVID-19.

• Ensure residents wore face masks when they were out of their rooms.

• Quarantine exposed residents and those returning from the hospital.

• Sanitize the food cart and dispose of trays and plates that were used in the unit where virus-positive residents are isolated.

• It’s unclear if any penalties will be imposed.

At Franciscan Villa in Broken Arrow, Executive Director Marla Heckman was on-site for all three of the nursing home’s inspections.

Heckman used to take Saturdays off but after one of her residents tested positive for the virus, she moved into the facility to keep a closer eye on things. Now, the nursing home has one of the 10 worst outbreaks in the state, as 54 residents and staff tested positive and six have died.

It was March 20 when the inspector first arrived – before any residents or staff were confirmed or even suspected of having the virus. The same inspector returned for a second inspection on April 5, two weeks after the facility’s first confirmed case, and again on April 23.

The inspector interviewed Heckman and several staff members about the use of protective equipment; observed an employee washing her hands; stood in the food hall during mealtime and watched as trays were sanitized; and took a tour of the wing reserved for residents who had symptoms or tested positive for COVID-19. Heckman said she does not remember the inspector interviewing any residents.

Heckman said the inspector did not make any recommendations or suggestions for improvement. No violations were cited, according to the reports.

Franciscan Villa’s first positive resident was identified on March 28. Heckman said they do not know how the virus got into the facility.

“You can do everything and it still shows up,” Heckman said. “Once it’s in the door, there’s not much you can do to stop it.”

Nursing homes are trained and set up to respond to respiratory and skin infections and the flu. But the novel coronavirus is not like the flu.

In March, residents at Grace Skilled Nursing and Therapy in Norman were among the state’s first nursing home residents to test positive for COVID-19.

One inspection was performed at the facility on April 4 and no deficiencies were found, according to the report. Of the facility’s 90 residents, at least 72 have tested positive. Ten have died.

“Unfortunately, the nature of the pandemic – which involves a disease which is both highly contagious and easily spread – is that despite every effort on the part of facilities, there are simply no guarantees with respect to arrest of its transmission,” the facility said in a statement in response to questions from Oklahoma Watch. “As well, while nursing home residents are no less susceptible to the virus than the general population, they are often at a much higher risk of having a severe outcome.”

Steven Buck, president of Care Providers Oklahoma, which represents the for-profit nursing home industry, said the presence of the virus does not necessarily indicate poor practices. He said asymptomatic staff and changing protocols could explain some of the gaps.

“You’re seeing facilities that are in compliance with the guidance of that moment in time,” Buck said. “But because of the way this virus lingers and the way it presents in an asymptomatic fashion, what we were doing, which was the correct guidance 30 days ago, may no longer be the best practice.”

Houser, who visited nursing homes regularly in her capacity with the state, understands how the virus could get into a facility that’s following protocols. But, she said, facilities with widespread outbreaks “clearly have deficient practices and it won’t change until they’re held accountable.”

Oklahoma Watch is a nonprofit, nonpartisan news organization that produces in-depth and investigative content on a wide range of issues facing the state. For more Oklahoma Watch content, go to oklahomawatch.org.

About the Author: Whitney Bryen