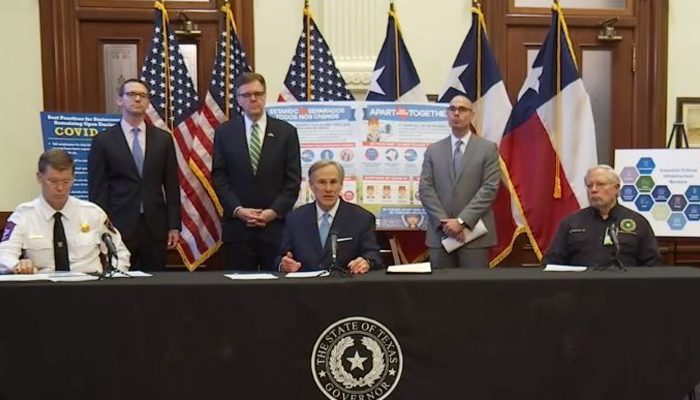 AUSTIN — Gov. Greg Abbott on Monday will announce his plans for reopening the Texas economy after nearly two months of increasing job losses and business slowdowns caused by the still-spreading coronavirus that has infected nearly 25,000 people in the state and caused at least 648 deaths.

The governor’s announcement that will likely lift some of the restrictions he and local authorities around the state have imposed will come during a news briefing scheduled to begin at 2:30 p.m. Central Time. In a round-robin of broadcast interviews in recent days, Abbott stressed that his plans are designed to protect public health.

“We want to stoke the Texas economy as much as possible,” Abbott told KSAT News of San Antonio. “However, we must do it safely. As a result, we’re working on orders that will allow businesses to open up in phases gradually on the lines of what doctors have prescribed to us.”

Gov. Greg Abbott briefs the state’s effort to battle the spread of coronavirus, March 31, 2020, at the Texas Capitol (Photo: Still from pool video)

In late March, following the lead of authorities in several Texas counties, Abbott issued a series of stay-at-home guidelines meant to control spread of COVID-19, the sometimes deadly illness caused by the virus. The effect was to shutter numerous businesses and sideline millions of Texas workers.

Before that, he ordered schools closed, and restaurant dining rooms and businesses like massage and tattoo parlors shuttered.

More: Why the coronavirus oil bust called ‘worst energy crisis in history’ and what’s next

But over the past couple of weeks, some of the governor’s fellow Republicans have pushed for an accelerated reopening saying the state’s economy faced irreparable harm under a prolonged period of idleness. Some Texans have also gathered in protest of the restrictions, which include limiting the number of people congregating in one place and encouraging social distancing.

A poll by the Texas Tribune published Sunday suggests those calling for an immediate reopening are in the minority.

The poll of registered voters showed about two-thirds of Texans agreeing with actions taken by the governor and local authorities suspending nonessential business operations. More than 75 percent of the respondents said they support the stay-at-home order for nonessential activities.

More Moritz: Are Texans as resilient in the face of COVD-19 as Gov. Abbott says? Not all of them

Meanwhile, the Texas Democratic Party issued a statement, saying the governor and the Trump administration “have consistently mismanaged the coronavirus pandemic.”

“Now, Governor Abbott threatens to open Texas up too quickly while we still rank second-to-last in the country for testing and haven’t yet hit our peak in deaths,” the party said. It plans a rebuttal news briefing later Monday.

This is a developing story. Please check back for updates.