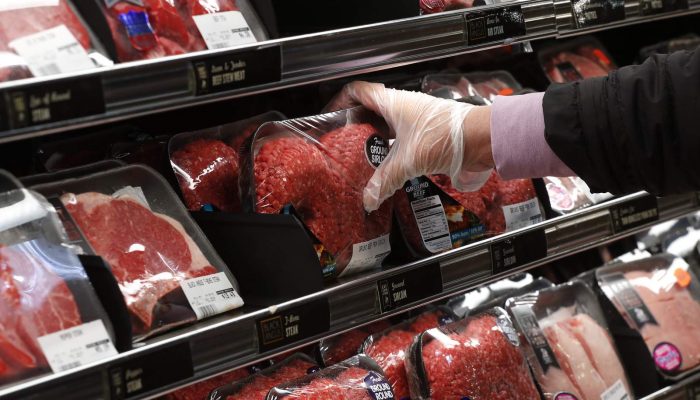 
Despite an explosion of new coronavirus cases in the Texas Panhandle tied to local meatpacking plants, Gov. Greg Abbott on Tuesday indicated he will not reimpose stricter stay-at-home rules for Amarillo and surrounding communities, relying instead on “surge response teams” to deal with growing outbreaks.

After announcing plans to reopen more businesses in the state, Abbott said teams made up by health officials, emergency response workers and the National Guard would deal with “flare ups,” including those connected to meatpacking plants, by helping facilitate testing, ensuring sanitation at such facilities and assessing the transportation used by plants to shuttle their workers.

“There is a challenge in the Panhandle because of either a or several meatpacking plants up there,” Abbott said during a press conference at the Capitol. “There is a need for a surge response team to go in there to provide all the resources that are needed to get that area under containment.”

A federal task force was already expected on the ground in Amarillo on Monday to take over coronavirus testing and investigations in an effort to help contain outbreaks tied to area meatpacking plants.

Nim Kidd, chief of the Texas Division of Emergency Management, said state officials were also in the field working “to get our arms wrapped around” the situation in five different plants with approximately 12,000 employees.

Kidd indicated those efforts would include addressing transports to and from meatpacking plants and housing needs for residents who commute.

The spread of infections in some rural communities underscores the dangers faced by those working in meatpacking plants who have little power to avoid the virus.

The hot spots have continued to grow as the state has moved forward with relaxing shutdown orders across the state. The Panhandle, where a workforce of Hispanics and immigrants power several meatpacking plants, is now home to the highest rates of infection in the state.

The known infection rate in Moore County, north of Amarillo, far outpaces every other county in the state with 19.91 infections per 1,000 residents — a rate roughly 13 times higher than the rate in Harris County, the state’s most populous county. State health officials have been tracking a rapidly growing cluster of cases tied to the JBS Beef meatpacking plant in the town of Cactus. As of Sunday, that cluster included 243 people who had testified positive for the virus, including at least one person who had died. Not all of those individuals live in Moore County; the plant draws workers from a wide swath of the Panhandle and some from Oklahoma.

JBS shuttles part of its workforce from Amarillo to Cactus every day. In Potter County, of which Amarillo is the seat, the infection rate has climbed to 7.25 infections per 1,000 residents. Amarillo officials have said recently that 41% of the more than 1,000 cases reported to the Amarillo Public Health Department in Potter and Randall counties are tied to area meatpacking plants.

City health officials have not differentiated between meat plant workers and other locals in releasing that figure, but indicated most of that cluster is made up of plant workers.

The outbreaks tied to Texas meatpacking plants mirror what’s happening across the country, with the coronavirus spreading easily in an industry that typically puts workers shoulder to shoulder on fast-moving butchering lines. More than a dozen have been forced to shut down temporarily following surges in the infections and deaths tied to those facilities. The processing plants, including those in Texas, have scrambled to ramp up health and safety precautions, providing masks and eye protection to workers and placing plastic dividers in some areas.

But workers at JBS have said plant management was slow to acknowledge when their co-workers began testing positive, and those who come in contact with the sick are not always informed of their exposure. Instead, word has spread over private messages as colleagues check in on those who seemingly go missing from the production floor for days. In some cases, news that a colleague tested positive for the new coronavirus is shared on Facebook.

“The people who do show up to work are afraid to get sick, but we don’t have much of a choice,” one plant employee, who requested anonymity out of fear of losing their job, recently told The Texas Tribune.

Spread of the virus is not isolated to the meatpacking plant floors, reaching out into communities when workers wrap up their shifts and head home. Members of the community in Moore County, including church workers whose family members work at the plant, have also tested positive. In Amarillo, Mayor Ginger Nelson previously attributed the start of community spread of the virus in the area to meatpacking plants.

During a Monday press conference, Nelson said the workers being bussed in and out of her city each day may be contributing to the spread of the virus, but the city’s oversight is limited because the plant is in a different county.

“I’m grateful that [plant workers have] been willing to go to work. I mean they are critical to our nation’s food supply so what we need is help in strategies and supplies and resources to keep them working, to keep the food supply open,” Nelson said. “And we need some assistance in strategizing the safest way to do that both for our community and for those workers.”

The six experts that were deployed to Amarillo by the U.S. Centers for Disease Control and Prevention make up one of 40 field teams that have been sent out to help mitigate the spread of the virus across the country. The CDC team is expected “to assess and assist with recommendations to protect worker safety at food processing facilities and provide technical assistance for contact tracing and community mitigation support,” according to a CDC spokesperson.

A spokesperson for Tyson Foods, which operates a plant in Amarillo, did not directly address the growing outbreaks or the need for surge response teams, and instead provided a general statement about measures the company has taken during the coronavirus pandemic, including temperature checks, face coverings and social distancing measures. A representative for JBS did not immediately respond to a request for comment.

About the Author: KPRC