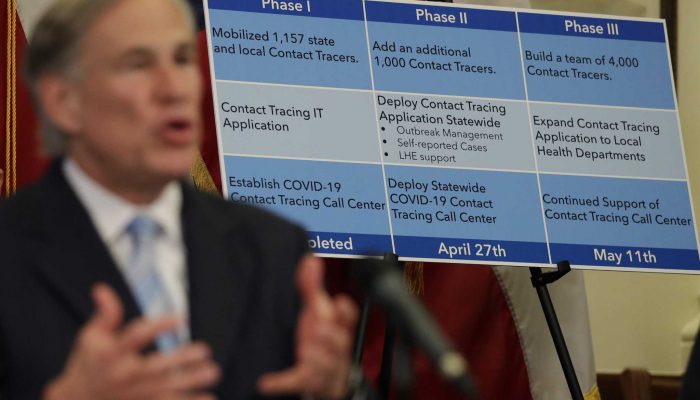 Gov. Greg Abbott’s plan for reopening businesses in Texas is reasonable, even if he did give in to his more autocratic tendencies by subverting local authorities.

Texans need to get back to work, and a tiered approach that limits public businesses to 25 percent of capacity is an essential compromise for maintaining social distance during the COVID-19 pandemic. The limit will reduce the likelihood of transmission while resuming cash flow for struggling businesses.

Abbot is also smart to wait 17 days to check if this crack in the door produces a flood of new infections and deaths. Most experts agree that opening too soon could reignite the pandemic, which would extraordinarily damage the economy.

His decision to keep high-contact businesses, like salons and bars, closed is also wise. We do not know who carries the virus or how easily it spreads. Maintaining our social distance remains critical.

Expanded testing would answer a lot of questions about the spread of the new coronavirus, but after decades of putting profits before public health, our laissez-faire system is not up to the task.

President Donald Trump abdicated responsibility for testing this week after his Department of Health and Human Serves botched the response to the pandemic. In guidance issued Monday, he’s leaving testing up to the states.

Texas’ public health system is abysmal in the best of times, so despite Abbott’s promise of increased testing, we should not expect testing capacity to reach optimal levels for months. If we wait for Texas’s antiquated, understaffed and underprepared system to catch up, we’ll all be bankrupt, and there will be rioting in the streets.

The same is likely true for developing a treatment, a vaccine and immunity testing. Trump’s happy talk about medical miracles and stupendous science belie the average American’s dangerous optimism and ignorance about the scale of the problem facing us.

My only hope is that if there is a sudden increase in cases and deaths, Abbott will keep his pledge to follow the science and shut down hotspots. He will undoubtedly face massive opposition to closing businesses again, even if bodies begin piling up, but it is the courageous thing to do.

As frightening as the outside feels right now, especially to the elderly and the immuno-compromised, money simply needs to resume circulation. Lost income is devastating families and destroying small businesses on an enormous scale.

Limited reopening, though, will only help a little. Every business plan is built on serving a certain number of customers paying a minimum price. Most businesses cannot raise prices just because the government dictated a customer limit. People will only pay so much for a cappuccino.

Even if allowed to operate at 50 percent capacity, businesses will struggle with customer volume as long as people are afraid the virus will kill them. As a society, we will need to make some hard decisions about how much taxpayer money to spend to keep companies out of bankruptcy, and how much unemployment we find acceptable.

We also need to rethink our boss’s power to fire us. I welcomed Abbott’s declaration that no one can force me to go outside, but is he guaranteeing that my employer cannot fire me if I prefer to work from home? No, I didn’t think so.

Abbott and his Republican allies, after all, oppose laws requiring employers to provide paid sick leave and health insurance. He has vehemently opposed expanding Medicaid to provide health care to the working poor, and he sees nothing wrong with the highest rates of uninsured in the country.

TOMLINSON’S TAKE: Industries plead for bailouts instead of planning for a crisis

A few weeks ago, Abbott declared the state was too big and too diverse for a statewide stay-at-home order. He had a good argument. But apparently, Texas is not too big for a statewide back-to-work order.

The latest COVID-19 data shows the virus flares in relatively small geographic hotspots. We don’t understand why, but cases and deaths happen among specific populations. Shouldn’t local officials have the authority to respond to those hotspots in Harris and Bexar counties?

Shouldn’t our locally-elected representatives be allowed to reflect community sentiment? Abbott’s declaration of ultimate authority betrays his totalitarian instincts. We should expect more bipartisanship and cooperation in a crisis like this, and he is failing this leadership test.

COVID-19 will continue to spread and kill people because we skimped on our public health system. We will need a new government and years to fix that mistake. In the meantime, we must restart the economy, and Abbott’s plan is as good as any.

About the Author: By Chris Tomlinson, Staff writer