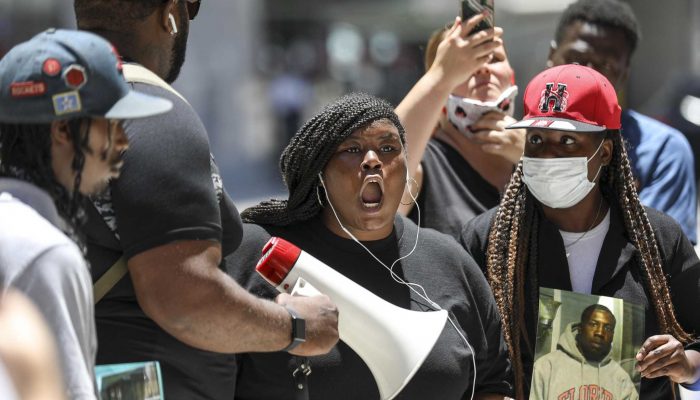 
Five civilians have been killed during encounters with Houston police this past month, turning heads in the local criminal justice community and inciting calls for reform from minority advocacy groups.

Mayor Sylvester Turner and Houston Police Chief Art Acevedo on Tuesday defended the agency and urged the public to look at each case individually. In the most recent encounters, they said, the officers’ actions appeared to be justified under the department’s use-of-force policy.

“What we have to respond to is the actions of individuals,” Acevedo said. “It saddens me that people look at race. What we need to look at is that behavior.”

The repeated explanations didn’t satisfy some of the advocates who called in to a Houston City Council public forum to raise red flags about the apparent uptick of officer-involved shootings. All five of the people shot and killed by police were black or Hispanic.

“We are targeting our men and boys of color,” Monique Joseph, Houston field officer for Texas Advocates for Justice, said during the meeting.

Criminologists acknowledged the spate of shootings as significant, and possibly a fallout from the COVID-19 pandemic. They were hesitant, however, to label them as a trend.

It’s difficult to know whether any increases in incidents are flukes that could be balanced out by fewer shootings later in the year, said Kevin Buckler, professor of criminal justice at University of Houston-Downtown.

The end of the Great Recession in 2009 also coincided with a jump in Houston police shootings, lending some credence to hypotheses that a poor economy can lead to rises in crime, he said.

“It’s hard to completely connect the dots, but there does seem to be something there,” Buckler said. “A reasonable person could connect those things together.”

Marginalized communities are already oversaturated with police in times that aren’t fraught with social change, said Howard Henderson, founding director of the Center for Justice Research at Texas Southern University. During an event like a pandemic, that presence increases as people spend more time in their communities and experience heightened psychological problems.

“You’re not seeing a spike,” Henderson said. “What you’re seeing is an increase that’s the result of an increase of (police) interactions.”

The first fatal shooting in April was one that Acevedo said has resulted in the most questions. Nicholas Chavez, 27, died after lawmen unleashed a barrage of gunfire while he was on his knees, according to a video of the incident.

The 14-minute encounter in Denver Harbor began on April 21 when neighbors reported seeing Chavez jumping fences and threatening bystanders with an object that was later identified as a piece of rebar. The Houston Police Officer’s Union later said Chavez had been stabbing himself with the steel and was trying to commit “suicide by cop.”

Acevedo said at least four officers shot the man with lethal rounds as he started “charging ” at them.

One more officer-involved shooting occurred less than a week later, and three others followed in May.

Christopher Aguirre, 28, had been shooting at random at a home in the 7900 block of Lane Street on April 27 when officers arrived and he moved to the front porch, police said. He eventually raised his gun at officers, and three of them opened fire, according to the Houston Police Department.

Adrian Medearis, 48, was being arrested May 8 on a DWI charge and was killed by the arresting officer after he allegedly grabbed the policeman’s fallen stun gun.

On May 14, 30-year-old Rayshard Scales died in a police encounter after a lawman responded to reports of a man brandishing a firearm near Scott Street and Corder Street. Scales continued to advance on the officer even as he stepped back around his police car, Acevedo said. The man reached for what appeared to be a pistol in his waistband, and the officer fired multiple times.

The chief has denied a witness’ allegation that the deceased man raised his hands in the air before being shot, and confirmed that Scales had a BB-gun — a replica of a 9-mm pistol.

In the most recent shooting on Saturday, 38-year-old Randy Lewis was killed by police moments after witnesses said he fatally stabbed a woman.

Community members took notice as the deaths piled up. More than 20 people gathered outside HPD headquarters Monday to protest Scales’ death, and a handful of people spoke about the spate of officer-involved shootings at the Tuesday city council forum.

Turner said he had personally reviewed some of the videos, and in some cases, called in family members to review the footage themselves. Most of the videos individually back the officers’ accounts, the mayor said.

As is the case in all officer-involved shootings, the cases will be brought to Harris County grand juries, according to the district attorney’s office.

“Every single life in this city is important. Every single person deserves to be treated equally by the law and by law enforcement,” Turner said. “I don’t want the facts to get lost and we just conflate every single thing together.”

Dav Lewis, president and founder of the group 2nd Chances Life, and others said that argument is beside the point — people of color are dying in police shootings, and white people are not.

Acevedo addressed the criticism on Tuesday afternoon, and added that most of the officers involved in the fatal police shootings are also people of color.

“Black and Hispanic people are dying every day in this city disproportionately as victims of violent crime,” he said. “Our officers don’t decide who they go after in terms of race.”

Acevedo alluded to the pandemic’s possible effect on the frequency of officer-involved shootings — a point which Henderson affirmed. More people are at home under debilitating conditions, and officers are dealing with changed street policing conditions and understaffing, he said.

“There’s going to be more shootings,” Henderson said. “There’s just no way around that.”

About the Author: Samantha Ketterer