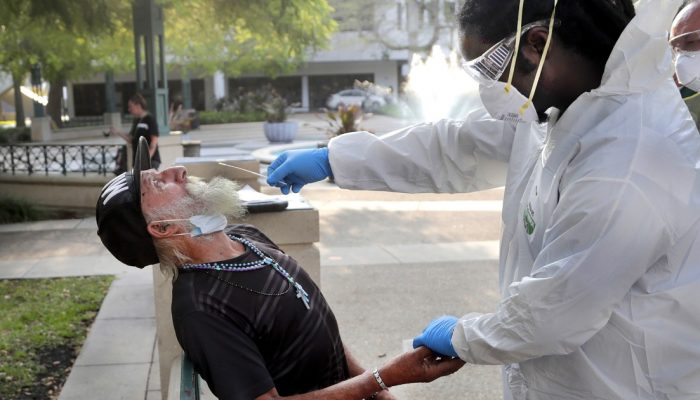 These hired public health officials work with patients to help them recall everyone they had close contact with during the time when they were most infectious. It’s no easy task.

On Thursday, New York Gov. Andrew Cuomo said that about three dozen contact tracers would be needed for every 100,000 people in affected areas. He estimated New York would need between 6,400 and 70,000 contract tracers, depending on the outcome of projected cases.

“It’s not rocket science to do it on an individual basis. The problem is the scale that we have to do this at,” Cuomo said during a news conference in Albany.

“It will require, under any estimate, a tracing army to come up to scale very, very quickly,” Cuomo said.

New York state has remained a hotbed of the coronavirus outbreak, with 305,000 cases and more than 23,300 deaths. Its stay-at-home requirement is set to expire on May 15, but could be extended.

Nationwide, the death toll from COVID-19 approached 62,000 on Thursday, and the number of confirmed cases has surpassed 1 million, according to Johns Hopkins University.

With little support from the federal government — the White House suggests in guidelines that states conduct contact tracing themselves — the effort has fallen on governors and locals leaders to implement as they reopen.

Earlier this month, Massachusetts Gov. Charlie Baker announced an effort to set aside $44 million for contact tracing. Washington Gov. Jay Inslee has said his state plans to recruit and train roughly 1,900 contact tracers by mid-May. The Seattle area was among the first virus hot spots in the country.

In Indiana, officials announced a program this week that includes having 500 trained contact tracers in place in the weeks ahead.

“As we fight the spread of COVID-19, we need the ability to rapidly contact positive patients and their close contacts to determine who else might have been exposed,” Indiana Gov. Eric Holcomb said. “Centralizing this work will allow us to quickly identify individuals who need to be quarantined, reduce the risk of additional infections and take actions to ensure our schools, workplaces and public settings are safe.”

On Thursday, several states — Idaho, Pennsylvania, Texas, to name a few — have stay-at-home orders that will expire. Still, most businesses in those states will have limited capacities.

New Jersey Gov. Phil Murphy announced he will reopen all state parks and golf courses on Saturday. He said social distancing will still be required for the foreseeable future.

“The curves, thank God, are beginning to show promise,” Murphy said in his Oval Office meeting. “And we’re beginning to take some baby steps on that road to reopening.”

About the Author: Los Angeles Times