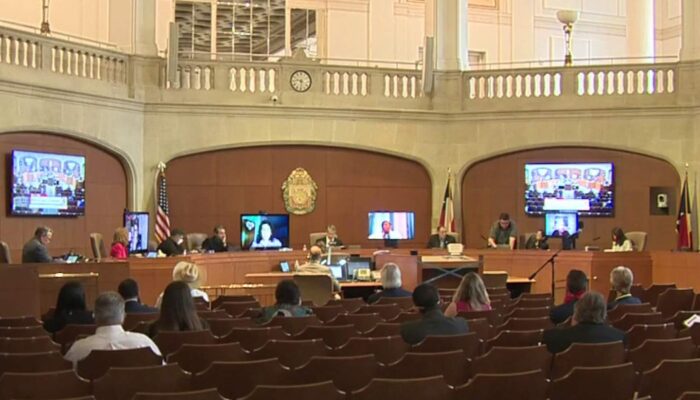 The enraged, often hate-filled messages were among more than 400 received by the mayor and council member’s offices in the days after they unanimously passed a resolution in May denouncing hate speech tied to the COVID-19 pandemic, according to records obtained by the KSAT 12 Defenders.

City officials released more than 1,000 pages of records Monday, more than six months after the Defenders requested them.

Nirenberg said in a written statement Tuesday that passing the resolution was the right decision, despite the influx of angry messages that it generated.

The resolution, which was put forward by Nirenberg on May 7, states that hate crimes, discrimination, and aggression against Asians and Jews were on the rise as the groups were blamed for the disease’s outbreak and spread.

The resolution denounced bigotry, antisemitism and “hateful speech” amid the COVID-19 pandemic, including the use of specific phrases such as “Kung Fu virus,” “China Virus” and “Chinese Virus.”

The resolution also stated that the Jewish community had been targeted with blame, hate, antisemitic tropes and conspiracy theories that they created, spread and then profited off of the deadly virus.

Jim Greenwood, Nirenberg’s then chief of staff, provided a thorough explanation of why the resolution was passed in an email sent to a fellow Nirenberg staff member hours after it went before council:

“This is not about a hate crime – this is about hate – the city council unanimously (11-0) supported a resolution (not a law, not an ordinance nor any mention of first amendment rights). The non-binding resolution denounced discrimination and derogatory actions against any group – but in this case Asians and Jews – which have become a target during the COVID crisis.

San Antonio is a city of compassion – and our fellow citizens from the Asian and Jewish community came to the mayor/council asking for the resolution – they have been slurred and denounced – the Mayor believes no one should be disparaged based on their race or religion and proudly supported the resolution.

This resolution does not violate anything and to say otherwise is wrong and irresponsible.”

The email was in response to the staff member saying that she was beginning to get “ugly calls” from people claiming the resolution declared using certain language as a hate crime and that the mayor and council were violating citizens’ First Amendment right to free speech.

Most of the 401 written messages were a cut-and-paste “petition for freedom from government oppression” which falsely claimed that city council had “weaponized the term ‘Chinese Virus.’”

Other messages included racist phrases to describe people of Asian descent while some applauded the city’s response to the COVID outbreak, but said the resolution was an infringement on their rights.

I actually think you done a good job managing the outbreak, but when I saw what the City Council Passed concerning naming the virus Chinese Virus, I was some what surprised. 1 I would think you have More important things on your plate. 2 through out history flu’s and virus’s have been named for where They started, as example

Other messages stated that the senders would no longer visit San Antonio or were intending to retire here and were now no longer considering doing so.

Passing the resolution was absolutely the right move. We are going to call out hate speech whenever we see it. COVID-19 was being used by extremists to spread anti-Semitism and to target members of the Asian and Pacific Islander community in our country. I am proud to stand with our Jewish, Pacific Islander and Asian communities against the spread of hatred.