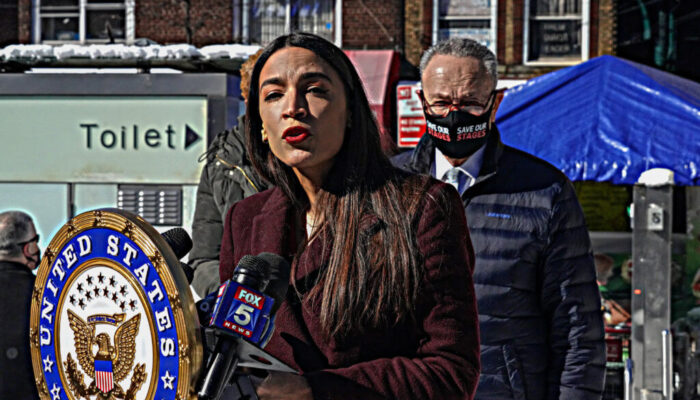 The drive occurred amid the scandal surrounding Texas Senator Ted Cruz, who was caught fleeing for the warmth of Cancun on Feb. 17 as millions of his constituents dealt with power outages, loss of water services and freezing conditions.

Later, on Friday, Ocasio-Cortez reported that $2 million had been raised through her endeavor. She’s now heading to Texas this weekend to survey the response to winter storms and frigid temperatures that have wrought incredible damage and left more than 3 million people in the dark.

After being shamed on social media for his disaster getaway, Cruz headed back to Texas on Thursday — claiming to reporters that he merely escorted his daughters on a trip with friends and had intended to immediately return. The New York Times, however, reported that Cruz and his wife, Heidi, had apparently planned a trip to Cancun days earlier through text messages sent to family and neighbors.

Amid Cruz’s catastrophe, AOC took to Twitter to launch a relief effort for Texans. She encouraged her followers to donate to her fund to support five Texas nonprofits assisting people in the cities of Houston, Dallas and beyond: The Bridge Homeless Recovery Center, Ending Community Homeless Coalition (ECHO), Family Eldercare, Houston Food Bank, and Feeding Texas.

The effort by a New York Member of Congress to help Texas stands in sharp contrast with Cruz — who previously opposed federal aid to help New York and other nearby states recover from Hurricane Sandy in 2012. He also opposed the most recent COVID-19 pandemic relief package which passed Congress in December.

Cruz also incurred the wrath of New Yorkers during his failed 2016 presidential campaign, when he criticized New York values as being too liberal for America. The remarks backfired on Cruz, as it wound up helping Donald Trump, a Queens native, defeat him en route to winning the Republican nomination, and eventually the presidency.

Our first effort is a partnership w/ 5 Texas orgs getting on-the-ground relief to Texans ASAP.

If you’re able, please donate here – it’ll split your contribution to all 5.

AOC’s tweet went up at 5:42 p.m. Eastern time on Feb. 18. By 9:17 p.m., the congresswoman reported that her drive had raised more than a million dollars, leaving her “totally blown away.”

“Thank you all so much. I’m at a loss for words. Always in awe of movement work,” she tweeted.

Ocasio-Cortez says she will be visiting this weekend with Texas Congresswoman Sylvia Garcia in Houston to “highlight what’s happening on the ground” as nonprofits work to respond to those impacted by the crisis.

We officially raised $1 million for Texas relief at 9:17pm.

Thank you all so much. 🙏🏽 I’m at a loss for words. Always in awe of movement work.

$1M raised in direct relief for Texans in less than a day.

As a thank you to everyone who contributed & amplified, I’ll be going to Texas this weekend to visit w/ @LaCongresista in Houston & highlight what’s happening on the ground. https://t.co/DSkTSqfbkZ

As for Cruz’s Cancun conundrum, AOC said Texas residents should demand that he take a one-way flight out of the Senate.

Ocasio-Cortez has previously criticized Cruz for seeking to legitimize election conspiracy theories in the days and weeks leading up to the Jan. 6 Capitol attack by an angry mob of Trump supporters and white supremacists.

“If Sen. Cruz had resigned back in January after helping gin up a violent insurrection that killed several people, he could’ve taken his vacation in peace,” Ocasio-Cortez wrote Thursday in retweeting a post from actor George Takei. “Texans should continue to demand his resignation.”

If Sen. Cruz had resigned back in January after helping gin up a violent insurrection that killed several people, he could’ve taken his vacation in peace. Texans should continue to demand his resignation.

But don’t blame me for this, my points are on Amtrak! 🚊 https://t.co/CAWCgtxQ73

About the Author: Robert Pozarycki