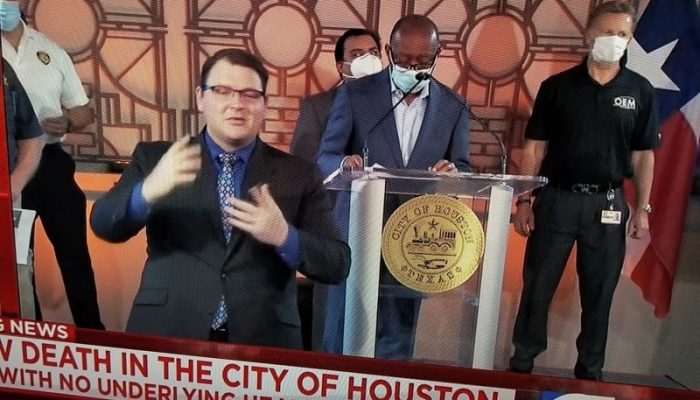 While Harris County Judge Lina Hidalgo was announcing the shutdown of the popup hospital the county erected outside NRG Stadium, saying the need for COVID-19 beds wasn’t as great as anticipated, Houston Mayor Sylvester Turner had to announce that the city’s brief string of no coronavirus deaths had been broken.

A white, non-Hispanic male in his 70s died on April 12, the city learned. This was the first death reported to the city in which there were no known underlying conditions, Turner said. The number of known COVID-19 deaths in the city now stands at 35 and with 74 new cases reported overnight, this brings the city to a total of 3, 120 positive cases total.

The Houston Health Department announced that it is expanding its outreach efforts into the city’s nursing homes. Throughout the country some nurses homes have seen a surge in COVID-19 cases and deaths. The city’s health department, aided by the Houston Fire Department, is visiting 300 nursing homes, assisted living center and the like to assess each situation in terms of “resident and employee screening and monitoring, personal protective equipment, infection control, environmental cleaning and education,” according to a department press release.

During his afternoon press conference, Turner emphasized that the city’s goal is to give out masks, not citations in the new Harris Countywide order calling for everyone to wear some kind of face covering in public. The city has already given out 50,000 masks just today, he said.

On ready harris, the latest county figures showed 48 deaths in the unincorporated areas of the county with a total of 2,284 confirmed cases.

Meanwhile, right wing Houston activist Dr. Steven F. Hotze filed suit against Hidalgo in state district court, saying her order making the wearing of masks in Harris County mandatory for 30 days starting Monday violates the Texas constitution and Gov. Abbott’s executive orders. Since Abbott has not made wearing face masks mandatory, Hotze’s suit argues that the county judge has no right to either.

Harris County is far from the first Texas county or city to make masks mandatory. Others — most of whom took this action much earlier in the month — include Dallas, San Antonio, Hidalgo County, Laredo, Bastrop County, Travis County, Edinberg, Mission and Palmview.

Friday was the first day that non-essential retail outlets could open for retail-to-go, although initially it did not appear that many customers were taking advantage of the option that does not allow them to go into stores but does mean they can pick up purchases curbside. Meanwhile several grocery stores, which have always been allowed to have customers inside, have expanded their hours back toward normal.

The governor is expected to announce his next round of orders on Monday, April 27.

About the Author: Margaret Downing