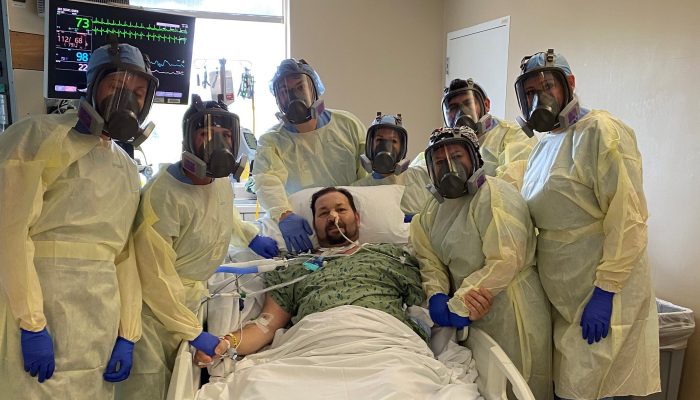 The U.S. is currently facing a shortage of ventilators. Here’s how they work and why they are so important in fighting COVID-19.

PHOENIX – A Phoenix man is the first in Arizona to survive COVID-19 through a rare form of treatment called extracorporeal membrane oxygenation (ECMO) therapy.

Enes Dedic, 53, was on the brink of death with a ventilator until his doctors at HonorHealth used ECMO as a last resort. Dedic is among the first U.S. COVID-19 patients to survive the disease by using the treatment and is among around 10 worldwide.

ECMO works by helping oxygenate blood outside the body so blood doesn’t need to transfer through damaged or filled lungs. Instead, tubes carry blood from the body to an external artificial lung that removes carbon dioxide and adds oxygen, at which point an artificial heart pumps the blood back into the body.

It’s a last hope treatment, as the mortality rate on ECMO is around 40% – “extraordinarily high for almost any medical procedure” – according to Dedic’s doctors.

After 10 days in a medical coma on ECMO, Dedic woke up responsive and soon was able to FaceTime his wife.

“I can’t even express myself,” his wife Olivera Dedic said. “I was jumping through the roof when I heard that they woke him up and he’s doing better.”

Doctor used therapy as a last resort: ‘ECMO or death for him’

After returning from travel overseas, Enes Dedic spent a few weeks at home in the Deer Valley area of Phoenix battling fevers, chills, aches and nausea.

He first checked into HonorHealth’s Deer Valley Medical Center on March 15 and quickly deteriorated. He was intubated and transferred to the HonorHealth John C. Lincoln Medical Center in Phoenix for increased mechanical ventilation.

A team of doctors tried everything to save him, said Dr. Anselmo Garcia, a pulmonologist and critical care physician. Enes Dedic was treated with all the potential drugs used for COVID-19 including hydrochloroquine, azithromycin, Kaletra, Actemra, antibiotics and anti-inflammatories.

Enes Dedic surrounded by his care team after recovering from COVID-19 through ECMO treatment. (Photo: Courtesy of HonorHealth)

None of these worked.

“At that point, it was either ECMO or death for him,” Dr. Ace Ovil, a trauma and clinical care surgeon, said. “Even though ECMO is a risky procedure and has some associated potential risks, we felt like we needed to give him a fighting chance of surviving his disease.”

The procedure allowed Enes Dedic’s lungs to rest while the machine worked for them.

Riley said it was uncertain whether this would work. At the beginning of COVID-19, early evidence suggested ECMO was not a useful treatment and that its complications outweighed potential benefits. But given this patient’s critical situation, the benefits were worth the risks, Riley said.

“In the bottom of my heart I was thinking that he’s a strong man, he’s going to survive,” Olivera Dedic said. “But at the same time, I was scared with all of this technology, everything, machines, ventilators and everything they have to do for him, all those medications. I was very, very scared what was going to happen.”

Part of the ECMO machine that oxygenates blood outside a patient’s body to ease impact on damaged lungs. (Photo: Courtesy of HonorHealth)

After 10 days in a coma while treated with ECMO, doctors woke him up and he was quickly responsive.

“This was a complete team effort,” Garcia said. “There are round-the-clock nurses, respiratory physicians, aides that helped, even housekeeping, just to keep everything going just so that we can maintain the therapy that’s needed for one patient on a day-to-day basis.”

In recent days, he’s been feeling “much better” but is still “very weak,” Olivera Dedic said. He does physical therapy and has been working on standing next to his bed. He’s still in the hospital and she’s not sure when he will be released.

Olivera Dedic has not seen her husband in person for a month. While he was in a coma, she couldn’t sleep, cried often and tried hard to remember their happy times together. She felt “50/50” he would survive the ECMO treatment.

“It was very emotional and scary,” she said. “I’m very thankful to doctors and nurses and all the entire staff in the hospital who saved my husband, and today I’m still the wife of Enes Dedic.”

Will ECMO be used more widely to treat coronavirus?

ECMO has been used for H1N1, flu and lung injury patients for many years, Ovil said. But it’s a resource- and labor-intensive treatment and also a scarce resource.

For approximately every 50 to 100 ventilators, there is just one ECMO machine available, Riley said. HonorHealth has five in its system. If the treatment continues to prove successful for other critical COVID-19 patients, there may not be enough devices to help all the patients in need.

Most patients with COVID-19 can be supported with a ventilator, but a subset of them get so ill that a ventilator no longer helps. ECMO could be most useful for that type of patient, Ovil said.

A bridge between life and death:: Most COVID-19 patients put on ventilators will not survive

Who gets a ventilator in a shortage?: ‘Can’t buy your way into salvation,’ NJ governor says

The Food and Drug Administration last week issued guidance to expand the availability of ECMO devices to help address COVID-19.

Garcia said the team is being contacted by medical centers across the country for advice. Riley hopes their example of an “out-of-the-box approach to care” will lead to more COVID-19 survivors.

“The proof of concept is pretty important,” Riley said. “At first, we were discouraged from even trying this, and people were dying. Now that we do have some success, we have learned ourselves very much of how patients respond from this initial patient, and we’re using that to help treat our subsequent patients.”