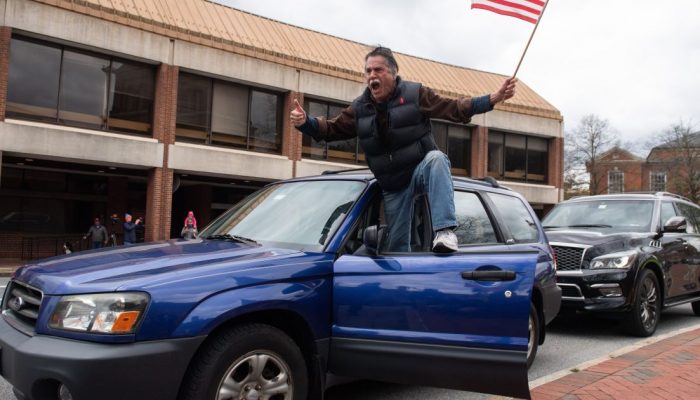 As growing numbers of protesters challenge coronavirus restrictions across the nation, New York Gov. Andrew Cuomo issued an impassioned plea Saturday for the nation to remain united as it fights the pandemic.

“The emotion in this country is as high as I can recall, people are frustrated, we’re anxious, we’re scared, we’re angry,” Cuomo said during his daily briefing, emphasizing that the crisis is mentally and economically devastating. “Look, if you have partisan divisions splitting this nation now, it’s going to make it worse… This is no time, and no place for division. We have our hands full as it is. Let’s just stay together, and let’s work it through.”

Cuomo spoke before scheduled protests began in Texas, Maryland and Wisconsin against ongoing stay-at-home restrictions enacted to fight the spread of the coronavirus. Several such demonstrations have already taken place across the country this week, including in California, Michigan, Ohio and New Jersey.

On Saturday in downtown Annapolis, Md., dozens in their vehicles drove in circles and honked during a lunchtime protest. One woman waved a sign out her window that said, “I want to save my business!!! I need to work!” Another man scrawled on his pickup truck, “The face mask you were duped into wearing symbolizes you loosing your freedom of speech.”

The protests come at a time when governors are weighing measures for reopening their economies without easing restrictions so quickly that they risk a new surge of infections, and without adequate testing capability. On Friday, Florida allowed some beaches to reopen — resulting in throngs crowding Jacksonville shorelines not wearing masks or practicing social distancing. Texas announced plans to ease some restrictions starting next week.

President Trump, after claiming sole authority over such matters and later reversing course and saying he was leaving such decisions up to the states, seemed to encourage protests Friday when he took to Twitter and wrote “LIBERATE” three states led by Democratic governors. Protests have already taken place in the states — Michigan, Minnesota and Virginia — and Trump later defended the protesters.

“These are people expressing their views … they seem to be very responsible people to me,” Trump said during his evening White House briefing Friday when asked whether he was worried that the gatherings could further spread the sometimes deadly virus.

National polls indicate that the protesters do not reflect most Americans’ views. A Pew poll released Thursday found that 66% of Americans were concerned about lifting restrictions too quickly; 32% were concerned that they were not being lifted quickly enough. And some officials were increasing or extending restrictions Saturday. Hawaii’s governor ordered all the state’s beaches closed except for swimming and other socially distanced water activities. The United States and Canada also agreed to extend the closure of their shared border for 30 days

More than 37,000 people have died from COVID-19 in the United States, with more than a third of the victims in New York state.

Cuomo reported 540 new deaths Saturday morning, the lowest toll in several days. He also said that hospitalizations and intubations had declined. But he warned than 2,000 new cases are still being diagnosed or resulting in hospitalization daily, and that his state lacks the ability to do the type of widespread testing and tracking necessary for its economy to fully reopen. Cuomo repeated his plea for aid from the federal government, but did not lace into Trump as he did the previous day.