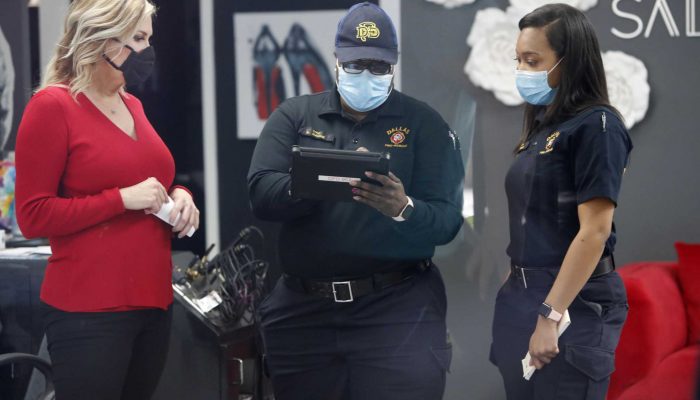 
On April 19, Alan Snider and his wife were walking into a Walmart in Cleburne when a city marshal stopped the couple. To slow the spread of the coronavirus, only a single customer from each party could enter the store. One of them would have to wait in the car.

Snider “started cursing the marshal,” and dared him to write a ticket, said Sgt. Kelly Summey. “And guess what.”

Now, Snider has joined a lawsuit arguing the state’s restrictions on personal movement and business operations are unconstitutional and being unfairly enforced.

On Tuesday, the Texas Supreme Court bumped the complaint to a lower court. Yet the justices seemed to sympathize with Snider and nearly a dozen other plaintiffs, writing that “As more becomes known about the threat and about the less restrictive, more targeted ways to respond to [COVID-19], continued burdens on constitutional liberties may not survive judicial scrutiny.”

The lawsuit, which includes hair salons, vape shops and fitness businesses shuttered by the rules, was only one of several recent challenges to the state and local emergency orders. Even as Gov. Greg Abbott on Tuesday afternoon announced further loosening of the rules enacted to slow the spread of the novel coronavirus, enforcement actions by police and regulators against individuals or businesses that have violated them have piled up.

FOR THE LATEST: Interactive maps, charts show spread of COVID-19 across Texas

In Houston, a strip club filed a lawsuit claiming it should be allowed to stay open. The Department of Licensing and Regulation, which oversees many state-regulated occupations, has nearly 300 active investigations into barbers, cosmetologists and massage therapists that have been accused of violating state or local orders to stay closed. It remains to be seen how many of those will be contested.

In one sense, the legal protests represent frustration with a lengthy lockdown that has kept people at home, out of work in many instances and away from loved ones. Politics may play a role. One attorney filing the lawsuit on behalf of Snider was state Rep. Briscoe Cain, a Deer Park Republican associated with hardline conservative positions.

Yet legal experts also say that the unprecedented length of the restrictions, as well as the number of people they have affected, have provided a unique opportunity for substantive, even overdue legal challenges that could clarify the limitations of the emergency rules.

Texas Take: Get political headlines from across the state sent directly to your inbox

In the past, they say, orders restricting where people can go and which businesses must close have been relatively brief and limited to specific disaster zones. Any complaints that the restrictions compromised individual liberty or caused undue economic stress have dissolved when the restrictions were lifted.

As a result, emergency orders and their legal underpinning have not been tested in court. “There isn’t precedent where we’ve had to work this out and fill in the gaps in the law,” said Emily Berman, a University of Houston Law center associate professor who has studied questions of civil liberties under national security restrictions.

In Texas emergencies, county rules trump city rules. Yet authority for the governor to issue orders superseding both are less clear, said Shannon Edmonds, director of government relations for the Texas District and County Attorneys Association, which represents state prosecutors.

“There is nothing that gives that trump card power to the governor,” he said.

In addition, the social distancing and essential/non-essential business rules themselves, and how they are to be enforced, has not been clear, making them susceptible to a legal attack. The Snider lawsuit noted that Abbott’s order, for example, said only that people shall avoid non-essential businesses such as hair salons.

“Does that say the salon shall close? No, it says the people shall avoid it,” said Arlington attorney Warren Norred, who also represents plaintiffs in the Supreme Court case. “If I used to go get a haircut every week and I now go every month, I am avoiding the salon.”

The letter also noted that violators could face criminal penalties. Yet that has presented another legal target as different county judges and mayors have interpreted the governor’s restrictions differently and with a wide range of enthusiasm.

While police in most cities have refrained from issuing citations to social distance scofflaws, in Beaumont, an H-E-B shopper was ticketed for violating social distancing rules. Laredo police conducted a sting operation on beauticians operating in violation of the coronavirus restrictions.

In Abilene, when a man who’d tested positive for the coronavirus vowed he would not self-quarantine in his house, a district judge ordered him to wear an ankle monitor. “He said, ‘If you do not shelter in place we will put a monitor on you and pursue charges,’” explained Taylor County Commissioner Chuck Statler. The man agreed to stay home, Statler said.

Citing the uncertainty and contradictions in the restrictions, however, the prosecutors’ organization cautioned members they could face obstacles bringing violations of emergency orders to court. “These kinds of orders are likely written more by doctors than lawyers, and if we started arresting people for not following ‘doctor’s orders’ we’d all need to quadruple our present jail capacity,” it said.

As with previous disasters, any challenges to the coronavirus rules may disappear naturally as the legal restrictions dissolve.

At the end of April Abbott announced a phased opening of the economy, with parks, churches and restaurants able to restart their operations in a limited capacity.

On Tuesday, he announced that barbershops, and hair, nail and tanning salons could also reopen at the end of the week with proper social distancing measures in place. Fitness businesses and manufacturers will be permitted to start up again on May 18, he said.

About the Author: Eric Dexheimer