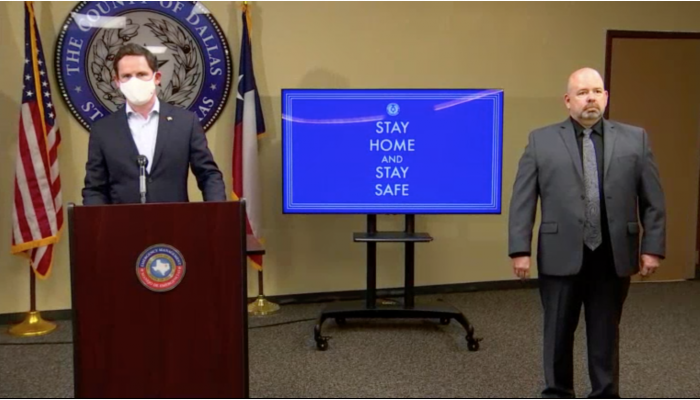 
Dallas County this week saw three of its four highest single-day COVID-19 cases, just as the disease became the third leading cause of death here. Friday’s 187 confirmed diagnoses were the highest single-day total. A total of 106 people have died from the virus, a number that could be larger and now trails only heart disease and cancer in total deaths since March 19.

Dr. Philip Huang, the head of Dallas County Health and Human Services, said Friday afternoon that the county was requesting the medical examiner to test more bodies for the disease to get a better understanding of whether the spread has claimed more lives than previously thought.

All of this is happening under the backdrop of a partially and newly reopened Dallas County, where Gov. Greg Abbott has given permission to restaurants, retail stores, movie theaters, and malls to open their doors to 25 percent of their maximum occupancy. Dallas County has not seen the requisite two week decline in deaths, infections, and positive tests that federal health officials request before reopening sectors of the economy. Instead, the economy comes to life as Dallas at least flirts with its predicted peak, which we’ve been told would come at the end of April or early May. The fear is that these loose measures could cause another spike. Even Abbott has said he isn’t totally comfortable visiting a restaurant just yet.

“When I decide I need some restaurant food I’ll take the governor’s advice or the advice of the CDC, I’ll go pick that up or have it delivered and not go sit in a restaurant,” said County Judge Clay Jenkins.

The reason for the increased positives is an educated guess, Jenkins added. The spike is in line with when the Centers for Disease Control and Prevention relaxed its testing requirements for asymptomatic individuals and allowed essential retail and grocery workers to get tested at federal drive-thru sites just like first responders and healthcare workers had previously been. (Your doctor can still refer you to a private lab for testing, and there are about a dozen private drive-thru sites scattered around the county.)

“These increasing number of positives who are working in grocery stores and working in big box stores should emphasize to us that we want to avoid whenever we can group settings with strangers,” Jenkins said. “We’re looking for that two-week decline; that’s when the doctors say you can loosen up a little bit on your choices without blowing up the curve.”

He advised avoiding unnecessary contact with other people, physical distancing when in public, and wearing face covering. He requested employees to raise safety concern with their employers, and visit the county’s portal here to report any illegal openings or safety violations. You can also call 311.

Huang noted that testing still isn’t robust enough to mobilize quickly around an outbreak at a series of businesses; the hot spots are still clustered around the jail and a few long-term care facilities, but there are positives in all Dallas County ZIP codes but two.

It’s clear the virus is still spreading. Jenkins repeatedly cited the opinion of public health officials when considering what to do this weekend: “What they’re telling you is stay home as much as possible, avoid crowds, wear your face covering when you’re in the crowds, and maintain a six-foot distance.”

About the Author: Matt Goodman