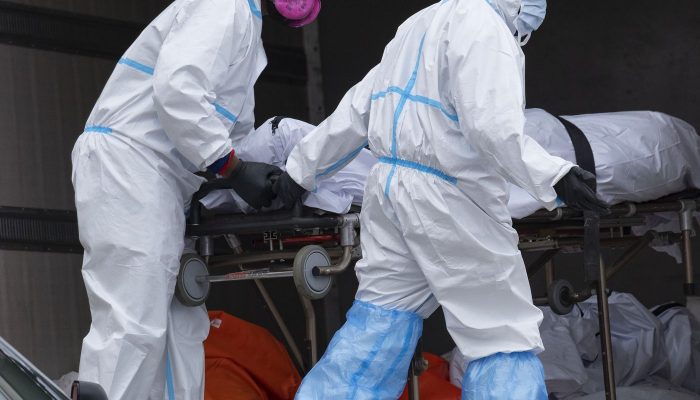 
SALT LAKE CITY — Drug companies, researchers and health care providers worldwide are teaming up on hundreds of studies and clinical trials related to COVID-19, most looking for effective treatments to combat the sometimes-deadly viral respiratory infection.

The world is well aware there’s no approved remedy and a vaccine’s likely to be a year away.

But as communities impatient with restrictions and worried about economic fallout begin to reopen, many leading health experts warn that a second wave of COVID-19 is likely.

If people are not diligent on measures that slow the spread of the disease — washing hands, social distancing, wearing masks and other preventive steps now second nature to many Americans — the infection is likely to spread broadly, erasing gains and posing greater risks, said Dr. Jeremy Voros, medical director of St. Mark’s Hospital emergency department.

Some believe that adds urgency to the need to roll out treatments or at least strategies to manage care for those who suffer severe cases.

An orange biohazard tag hangs from a body bag in an isolated refrigerated unit set aside for bodies infected with coronavirus at the Cook County morgue in Chicago on Tuesday, May 5, 2020.

Effective treatments could reduce deaths and shorten hospital stays, among other benefits, said Dr. Andrew Pavia, chief of pediatric infectious diseases at University of Utah Health and adviser to the Centers for Disease Control and Prevention. They might enable more people to manage their disease at home or even make them less contagious — “the highest bar to set, but one we’d like to get to.”

Effective antivirals would change what it means to manage COVID-19 in a time without vaccine, he said.

But we’re not there.

Instead, progress is measured in small steps that have thankfully added up.

In the months since the SARS-CoV-2 virus that causes COVID-19 was identified, mortality rates have improved for individual patients “lucky enough to have access to medical care and seek it,” Pavia said. Tools like pulse oximeters to measure oxygen in the blood at home are helping people to know when to seek urgent care. And most communities have not overwhelmed their hospital systems, slowing disease spread so people who need to be hospitalized can be.

But pinning too much hope on finding effective treatment is partly responsible for “so much magical thinking” about some treatments that have been pushed harder than data warrants, Pavia added.

Khabbaza thinks treatment specific to COVID-19 might elude us. We might need to be satisfied with the care that’s long been accorded other respiratory infections which can also be severe, including influenza: targeted symptom management and supportive care so the body heals and the patient recovers.

“I think finding a treatment is going to be very important,” said Dr. Peter Marshall, vice chief for medical critical care and clinical associate professor at the Keck School of Medicine at the University of Southern California. “I think an effective and safe vaccine is probably a higher priority because obviously if you can prevent this disease, you don’t have to deal with treating it. But finding effective treatment is very important.”

Marshall said among a doctor’s most painful tasks is diagnosing a disease, then telling the patient there’s no treatment.

The good news is 20%-40% of those infected with COVID-19 will have NO symptoms, said Voros.

And more than 90% of those infected will not develop illness severe enough to require hospitalization, said Dr. Brandon Webb, infectious disease physician and chairman of Intermountain Healthcare’s COVID-19 therapeutics team. Still, some will become very sick, maybe because of unknown predisposition. That’s one of the disease’s many mysteries.

Treatment is far more important for those with a severe response to the virus.

Webb said that the treatments researchers are exploring so far have included attacking the virus itself and trying to calm a hyperactive, disproportionate immune response that kicks off what’s being called a “cytokine storm.” The storm ramps up inflammation and creates the most severe complications of COVID-19 — from blood clots that can attack the brain, lungs, limbs and other organs, to kidney failure, inability to breathe and other serious, sometimes-deadly effects.

Absent treatment, tackling each of those as they occur — or before they occur — has been key to patient survival. Blood thinners, oxygen, dialysis, ventilators, heart-lung machines and other tools are essential on a case-by-case basis.

The best approach so far, in fact, is not needing treatment. Efforts to avoid becoming infected are central to taming the pandemic, especially for those at high risk, including people who are elderly, immune-compromised or have certain medical conditions, like diabetes or heart disease.

Marshall believes treatment “might be a bit closer” than a vaccine. For one thing, medical experts have been able to look at drugs already designed for other use or previously studied, including on SARS and MERS, which are also coronaviruses.

The pandemic is global, so while researchers may not speak the same language, they’re going after a common enemy and building on each other’s findings.

“There’s been a ton of studies that have been started to try to look at this virus. … All kinds of modalities are being tested as we speak,” Marshall said.

Among the drugs and methods being tested against this coronavirus:

The antiviral remdesivir is the first so far to show any efficacy. Manufacturer Gilead reported it shaves several days off hospitalization, but few details have been disclosed.
Lots of studies are looking at the anti-inflammatory, antiviral, antimalarial hydroxychloroquine, though results have been disappointing. It’s now being tested to see if it stops or slows viral replication.
The antibiotic Azithromycin has anti-inflammatory properties and is being tested.
Two old anti-HIV drugs are on the list because they’ve blocked viruses from packing themselves up to infect other cells.
Because so many severe complications come from that cytokine-fueled immune response, Marshall said researchers are looking at medicines with anti-cytokine activity.

If it seems like a lot of “antis” made target practice, it’s true. Many “antis,” from antibiotics to antimalarials, also have antiviral or anti-inflammatory properties, several experts told Deseret News.

The plasma of COVID-19 survivors is being tested to see if antibodies they developed help people with the disease to recover. Some studies are “pooling” blood from those who produce high levels of antibodies to see if they can harness some of the immunity that might result as a way to dilute or fight the viral impact. There, too, experts have more questions than answers.

“We don’t know if immunity lasts for very long or how long it takes for immune antibodies to be present in the blood,” said Marshall. “And we don’t now what percentage of patients actually do acquire immunity after infection. We think it’s more than 50% but it’s certainly not 100%.”

Another potential treatment is monoclonal antibody — a genetically engineered antibody designed to fit on the spike on the outer shell of SARS-CoV-2 to change its shape so it can’t enter the ACE2 receptor that is the virus’ pathway into the respiratory system through the eyes, nose or mouth. Webb compares this to putting goo on a key so it can’t open a lock.

As if the search for treatment isn’t complicated enough, experts interviewed for this story note that few of the studies already completed have been high quality, randomized, placebo-controlled efforts, which is the research gold standard. Many ongoing tests fit that description, but they haven’t yielded findings yet.

But even modestly effective treatment matters a great deal to those in life-or-death situations. If it’s just enough to allow a patient to improve slightly and if a doctor learns that changing the patient’s position lets him breathe a little better and if a certain dose of blood thinner is more effective at reducing blood clots, and so forth

Lives have been saved with combinations of just such small steps, experts told the Deseret News.

Khabbaza feels optimistic a future wave of infections won’t be as hard to manage as the first one, when everything about the SARS-CoV-2 virus and its impact was new.

The public is certainly better prepared, especially as most acknowledge there’s risk and know what to do, said Khabbaza. “I think people understand the importance of keeping their hands sanitized, not touching their face, wearing masks to minimize droplets,” he said. “With public health measures and the masses being more educated, I am very hopeful whatever bump does occur will be less than the initial. … I am seeing a lot of really good habits when I go out to the grocery store.”

He describes most of the public he encounters as “smart, respectful and aware.”

That doesn’t stop those providing care on the front lines from hoping for real remedies.

Khabbaza would love to see a treatment that stopped COVID-19 patients from needing intensive care. Medication that blocked the parts of a cytokine storm would be great, too, he said, adding most medical experts who work in ICUs aren’t pinning their hopes on new treatments because they haven’t always worked out, despite clinical trials.

Whether the drugs being tested against the novel coronavirus prove effective may not matter as much as people think.

Throughout the history of critical care, Khabbaza said, not many treatments have panned out for patients needing life support. Evidence-based supportive care has saved lives. That includes making sure pressure and volume aren’t excessive for those requiring ventilators, providing enough but not too much intravenous fluid for critically ill patients, not overdoing sedation and not transfusing blood unless the need reaches a critical threshold, he said. Those are “four pillars” that increase the odds a patient bests any critical illness and COVID-19 is no exception. “ICU and invasive care can come at a cost,” he said.

Khabbaza said most viral infections rely on supportive care as the treatment mainstay. For instance, the only “treatment” for influenza is Tamiflu, which slightly shortens the duration and perhaps lightens the illness’ severity a bit for some. “Many of us don’t think it’s a game-changing treatment, especially for people who get critically ill.”

Amid the bad news, Khabbaza said people shouldn’t despair if they become infected — even if they have risk factors for severe illness. He said he sees patients who have been told if they get COVID-19 they will die.

There’s definitely danger, but most of the people in high-risk groups will get better, he said, noting patients who are 90, or immune-suppressed or who had severe end-stage lung disease and still recovered. “The survival rates are lower in people with certain risk factors, but most still do survive,” Khabbaza said.

Where they have the most control, though, is avoiding infection. If people keep their hands clean, maintain a small social circle and don’t touch their face with unsanitized hands, “it’s going to be hard to get infected.”

Knowing the basics of how the virus is transmitted and how to avoid the disease can be empowering, said Khabbaza. Without a treatment or a vaccine, it’s the safest bet.

About the Author: Lois M. Collins