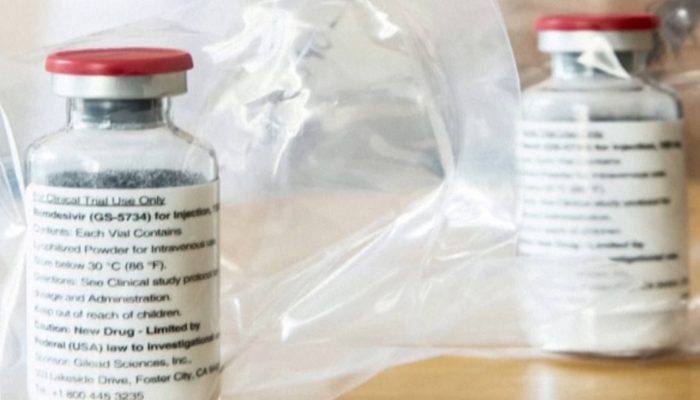 
President Trump dangerously suggested injecting disinfectants could help patients sick with the coronavirus, then said he was being “sarcastic.” But his remarks led to a spike in calls to helplines about taking disinfectants. We look at “What We Know About the Most Touted Drugs Tested for COVID-19” with Tanya Lewis, associate editor for health and medicine at Scientific American.

This is a rush transcript. Copy may not be in its final form.

AMY GOODMAN: This is Democracy Now!, democracynow.org, The Quarantine Report. I’m Amy Goodman. More than 207,000 people have died worldwide from COVID-19, but there are still no drugs proven to help treat the disease. This comes as fallout continues from President Trump’s dangerous suggestion last week that injecting or ingesting disinfectants could help patients get better.

PRESIDENT DONALD TRUMP: And then I see the disinfectant where it knocks it out in a minute, one minute. And is there a way we can do something like that, by injection inside or almost a cleaning? Because you see it gets in the lungs, and it does a tremendous number on the lungs. So it would be interesting to check that.

Get the latest news and thought-provoking analysis from Truthout.

AMY GOODMAN: After President Trump’s remarks on Thursday, governors and other state officials reported a spike in phone calls about taking disinfectants. Trump attempted to walk back his comments, saying he was being “sarcastic.” But everyone saw the videotape.

For more, we’re joined by Tanya Lewis, associate editor for health and medicine at Scientific American, whose recent piece is headlined “Here’s What We Know About the Most Touted Drugs Tested for COVID-19.”

Tanya, welcome to Democracy Now! Start off by just responding to this latest presidential suggestion, and the horror of it for states around the country that reported hundreds and hundreds of people calling in to say, “Is it OK to inject or ingest Clorox or Lysol?”

TANYA LEWIS: [inaudible] having me. I mean, as you mentioned, you know, the president’s comments really just — they were not really based in any sort of scientific evidence. There’s actually a lot of danger in injecting these types of substances into the body, so I’m not quite sure what the president was referring to exactly. But those disinfectants are definitely recommended for use on surfaces, not on the human body or in the human body.

AMY GOODMAN: So, Tanya Lewis, can you talk about what is being looked at right now, for people to understand? For example, another drug that he recommended was hydroxychloroquine, and yet the studies had not been done. Talk about the latest round of studies that have just begun, results of which have just begun to come out.

TANYA LEWIS: Sure. So, as you mentioned, the drugs hydroxychloroquine and chloroquine are both anti-malarial drugs, that are also used sometimes for rheumatoid arthritis and lupus, which are autoimmune disorders. But they are now being tested in clinical trials for COVID-19, because there is some suggestion that they might work as an antiviral or to prevent replication of the virus, as well as to affect the immune system and kind of prevent that sort of runaway immune reaction that we see in some of the most severe cases. But as it stands right now, those clinical trials are ongoing. There have been a few studies that have come out, but these were not randomized clinical trials. So, basically, in order to show any kind of benefit, you really need to have a randomized trial.

TANYA LEWIS: Sure. So that just means that you’re giving a random subset of patients the drug and a random subset a placebo. So, that way, you can kind of really compare the effect of the drug versus —

AMY GOODMAN: And it’s very hard to do that, right? If patients are sick, and the president recommends a drug could save you, it’s very hard to have them be willing to join a randomized study where they might not actually get the drug.

TANYA LEWIS: Exactly. And that’s the concern here, is that if you give patients the choice, most of the time they will say, “Yes, give me the drug,” because there really isn’t anything else available. So, in order to really show that there’s a benefit or not, we really need to have these types of randomized trials.

AMY GOODMAN: I want to turn to STAT news, which recently reported that the summary of a study of the antiviral drug remdesivir was inadvertently posted to the website of the World Health Organization Thursday. According to the results, which were quickly removed from the site, the drug, quote, “failed to speed the improvement of patients with Covid-19 or prevent them from dying,” unquote. The drug’s manufacturer, Gilead Sciences, which President Trump has also touted, refuted the results, saying the data suggested a potential benefit. World Health Organization spokesperson Daniela Bagozzi told STAT news, “A draft manuscript was provided by the authors to WHO and inadvertently posted on the website and taken down as soon as the mistake was noticed. The manuscript is now undergoing peer review and we are waiting for a final version before WHO comments on it.” Tanya Lewis, talk about remdesivir and what we know so far.

TANYA LEWIS: Sure. So, remdesivir is another antiviral drug that is supposed to work by interfering with the virus’s replication. And it was originally developed for Ebola, but was later decided — they decided not to use it, because it wasn’t as effective as some of the other treatments. But it was found to be effective against many other coronaviruses, like SARS and MERS, in mice and in cell culture.

So, this is a potentially promising candidate, but, as you mentioned, some of the early data that was leaked may suggest that it may not have much of a benefit and may not decrease the risk of death. Of course, I have to say that those data have not yet been made widely available and are not peer-reviewed and vetted, so it’s hard to sort of comment on that data without seeing the full data. But we’ll just have to wait and see in the coming weeks, when the official data is released, how effective it really is or not.

AMY GOODMAN: If you could talk about what convalescent plasma is?

TANYA LEWIS: Sure. So, that’s another potential treatment that is being tested. It’s basically, when you take the blood plasma, it’s everything except for the red blood cells. And you take the plasma from somebody who has recovered from the disease — in this case, COVID-19 — and put that plasma into a patient who is currently battling the virus. And then the idea is that the antibodies from that first patient will help the current patient sort of fight off the virus. But this is still, you know, again, fairly preliminary. There are some trials going on now. And at this point, you know, we’ll just have to kind of see, but it’s a potentially promising avenue of treatment.

AMY GOODMAN: And can you, in the last 30 seconds we have, talk about the FDA now just approving home kits? Now, are these for COVID-19, just to test if you have it, or are they for antibodies?

TANYA LEWIS: So, there are actually both kinds of tests. The ones that I’m more familiar with are the RNA PCR-based tests, which are basically to tell whether or not you currently have COVID-19. And just to clarify, these at-home test kits are actually test collection kits, so you just collect a sample with a nasal swab and then send that off to the lab to be tested.

AMY GOODMAN: And the reliability of this? We have 10 seconds.

TANYA LEWIS: Sure. So, you know, at this point, it’s pretty early, but we think that they are fairly reliable. But again, there’s always a risk that if you’re not swabbing correctly, maybe you would have a false negative.

AMY GOODMAN: Well, Tanya Lewis, I want to thank you for being with us, associate editor for health and medicine at Scientific American. We’ll link to your piece, “Here’s What We Know About the Most Touted Drugs Tested for COVID-19.”

And that does it for our show. Democracy Now! is working with as few people on site as possible. The majority of our amazing team is working from home. I’m Amy Goodman. This is The Quarantine Report. Thanks so much for joining us.

About the Author: Samantha Borek