Home TexasCovidNews As world is consumed by coronavirus, Microsoft launches biodiversity initiative to address challenges that will outlast COVID-19 – GeekWire 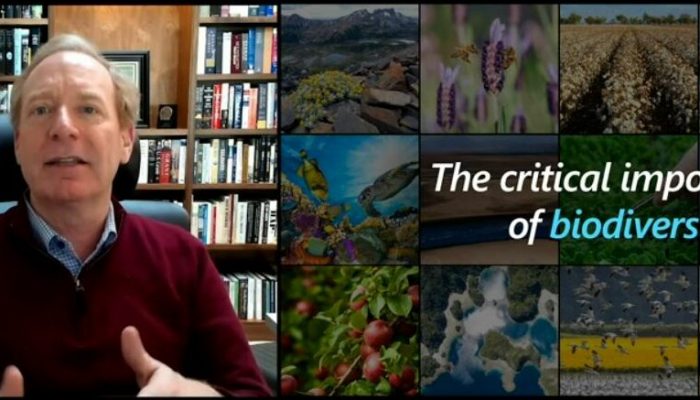 Microsoft today announced a new environmental initiative focused on biodiversity, seeking to address the growing but often overlooked threat of disappearing wildlife species and the unraveling of ecosystems that sustain human, animal and plant life in forests, grasslands and coral reefs around the globe.

With coronavirus ravaging people’s health and economies worldwide, “it’s not an easy time to get people’s attention,” admitted Microsoft President Brad Smith. But that doesn’t alter the drumbeat of harm being suffered by the natural world.

“We still need to save the planet,” Smith said in an interview with GeekWire. “Eventually this pandemic will end. These planetary challenges will remain.”

Today’s move highlights Microsoft’s continued role as something of an environmental conscious for the corporate world. In January, the Redmond, Wash.-based software and cloud behemoth committed to ambitious climate change goals that won experts’ praise and assured the company’s standing on the eco-leaderboard.

We still need to save the planet. Eventually this pandemic will end. These planetary challenges will remain.

The company’s new biodiversity-focused effort includes technology-based solutions to help researchers understand the scope of the problem and impact of solutions, as well as plans to increase public awareness about the threats to ecosystems and push for government policies to address it.

Microsoft leaders pointed to last year’s release of the first Global Assessment Report on Biodiversity and Ecosystem Services as key inspiration for their plan. The report, which came from the United Nations Intergovernmental Science-Policy Platform on Biodiversity and Ecosystem Services, had bleak news: natural ecosystems are declining at an accelerated rate and “around 1 million species already face extinction, many within decades.” Microsoft leaders also note that populations of mammals, birds and other creatures have plummeted nearly 60% over the past 40 years.

As a data-driven business, Microsoft is helping create what it’s calling the “Planetary Computer” to collect, analyze and make easily available detailed, spatially-based data about wild places and the creatures that live there.

Examples of information that the Planetary Computer could provide include generating detailed information on local forests, tree density, size and land use; insights into water availability and flood risks; and tallies of wildlife populations and availability of suitable habitat. Microsoft is partnering on the effort with Esri, a market leader in geographical information system software.

“The world needs greater access to data, to environmental data at a planetary scale if we’re going to be able to quickly assess, diagnose and then treat the natural systems that our human society depends so greatly upon,” said Microsoft Chief Environmental Officer Lucas Joppa on a live stream today.

The initiative also expands Microsoft’s AI for Earth, which launched in 2017 and has supported 500 organizations internationally. The company is increasing data access and providing more intuitive machine learning tools for the program’s participants.

In terms of public policy, the biodiversity initiative spells out three calls to action: the need for countries to conduct ecosystem assessments, essentially inventorying their plants and animals; improvements to systems for measuring and monitoring ecosystems; and acquiring and protecting public land and water resources.

The company is also committing to protecting and restoring by 2025 an area of land greater than the footprint of its business operations. That comes to 11,000 acres, an area roughly one-fifth the size of Seattle. The Nature Conservancy and the National Fish and Wildlife Foundation will help with the effort.

While coronavirus and its impacts are consuming public attention, the pandemic has demonstrated lessons that apply to environmental sustainability challenges as well. The essential need for timely, accurate information in order to fight COVID-19 reinforces the importance of better data on biodiversity, Smith said. He also called out parallels in the global nature of both threats.

As visualized by a cartoon, Microsoft plans to build a Planetary Computer that can quickly provide data to help protect biodiversity. (Microsoft via live stream)

“This virus respects no borders, nor do the sustainability challenges for the planet,” he said. “Carbon enters the atmosphere and moves around the world. It turns out that the situation in the wetlands in one area or a coral reef in another, ends up all being interconnected and having a global impact.

“So I think we’re still very much living and working in a decade defined by nationalism, and yet there are fundamentally important issues that require that governments and all of us work together across borders.”

Smith also praised the numerous public-private partnerships that have sprung up to address different aspects of the coronavirus pandemic, and noted that similar partnerships are needed to tackle wide-reaching, complicated problems on the environmental front.

“2020 is a powerful reminder that even in a polarized democratic society, people can move quickly together in a moment of crisis,” he said. “I think that’s an extraordinarily important thing for all of us to remember.”

Microsoft’s overall sustainability strategy includes four focuses: climate, biodiversity, water and waste. The company has yet to kick off initiatives around the latter two.

2020 is a powerful reminder that even in a polarized democratic society, people can move quickly together in a moment of crisis.

While the company is cited as a green leader, its track record is not flawless. Critics and even Microsoft employees have called out its partnerships with petroleum companies to provide technology to boost oil and gas production.

In 2019, the Microsoft announced deals with Chevron and Schlumberger, an oilfield services company, and with ExxonMobil. A news release on the latter deal cheered that the arrangement would make ExxonMobile’s Texas-based “Permian Basin operations the largest-ever oil and gas acreage to use cloud technology and is expected to generate billions in net cash flow.”

Smith acknowledged the criticism, but said that it doesn’t make sense to “turn off technology access for important parts of the economy” and suggested that the companies could transition to new energy sources.