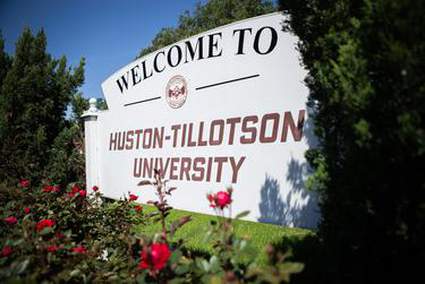 Hundreds of alumni returned to Huston-Tillotson University in late February for homecoming festivities at the historically black school’s east Austin campus. The Huston-Tillotson Rams spent the week-long festival in fellowship, holding brunches and crowning a king and queen. There were sold-out basketball games and festivals for alumni-owned businesses.

Homecoming is a tight-knit affair for the university community, said spokesperson Autumn Caviness, who has been at Huston-Tillotson for a decade. Many of the university’s students are the first in their families to attend college, and most can’t afford it without financial help. So the festivities celebrate not just the accomplishments of students, but also the sacrifices entire families made to get them there.

But a month later, quiet has replaced the warm campus buzz. The dorms are closed, and 1,100 or so students have been sent to their permanent homes — if they have one. In the face of the new coronavirus pandemic, Huston-Tillotson has had to transfer its brick-and-mortar style to ones and zeroes, and figure out how to do that without losing the hands-on support that has made the school a stepping stone out of poverty for more than a century.

“Our biggest competitor as an institution, it’s not other schools, it’s poverty,” Burnette said. “With 70-plus percent of our students being Pell-eligible, they come from families of low income, we’re fighting that poverty, so when a crisis like this happens, it highlights it, so it makes us shift in high gear.”

Almost 40% of the school’s students are the first in their families to go to college. About 65% are black and almost a third Latino. And 73% depend on federal assistance to pay for college. The university expects to help students meet basic needs like food, housing, transportation or technology.

Burnette said the school is working to provide computers for students, faculty and staff that don’t have their own so education can continue online. The school also wants to replace the wages of unemployed students, and continue to provide food and housing assistance to students who need it.

Before the pandemic hit, Huston-Tillotson was on the verge of launching it first fully online associate’s degree program. It had bought Canvas, a program to manage online assignments and exams, and was set to go live next year.

In March, the school fast-tracked its online presence from one degree to the entire university, expanding capacity on Canvas and teaching professors and students to use it. Administrators shipped laptops and internet vouchers to students and professors who didn’t have or couldn’t afford their own. The whole transition cost the school an extra $757,000 that it didn’t budget for, Caviness said.

The school is losing money from unused dorms and dining halls on campus, but still providing housing for its students with nowhere to go — students like Chima Ezirim.

After graduating high school in Nigeria, Ezirim wanted to study computer science in the United States. A placement program advisor recommended Huston-Tillotson, “because she knew that I really needed a lot of support financially because my parents are not all that well to do,” Ezirim said.

Ezirim, 21, now a senior has lived on campus since he arrived, so when the school vacated the dorms he had nowhere to go.

“I didn’t really know where to go because I don’t really have a family,” Ezirim said. “My immediate family is in Nigeria, and I have some family members all the way down in Midland, Texas but I wasn’t really comfortable going down there for the rest of the semester because I didn’t feel like the space would be really conducive for me to do school work.”

Huston-Tillotson allowed Ezirim to stay on campus, but the school still isn’t open to visitors or regular business.

Like their counterparts across higher education, Huston-Tillotson officials are now trying to get a handle on what the closures will do to their budget.

“So we’re going to lose residence hall revenue there because summer school is generally not online,” Burnette said. “And then in the fall, we had to rethink our budget … because some people may not be able to afford to come back to school.”

The budgets of historically black schools can be fragile since they have smaller endowments and fewer donations, said Lodriguez Murray, senior vice president for public policy and government affairs for the United Negro College Fund.

As a part of Congress’ more than two-trillion-dollar coronavirus stimulus package, institutions of higher education will receive $14 billion.

Huston-Tillotson expects to receive a little over $1.63 million in stimulus funding, at least half going to emergency financial aid grants to students.

Murray doesn’t think the current stimulus will be enough to ensure schools fully recover from the pandemic, and emphasized that the disproportionately high rates of infection and death from COVID-19 raise the stakes for historically black universities.

Austin City Council Member Natasha Harper-Madison grew up in the historically black east Austin and said she remembers Huston-Tillotson being a staple of the community.

Harper-Madison said Huston-Tillotson has been both a historical and contemporary anchor for black Austin as black neighborhoods have been uprooted and reshuffled by segregation, housing discrimination, and gentrification.

“So much has changed, so many people have migrated to [the suburbs]. A lot of that is due to affordability,” Harper-Madison said. “Folks are leaving the city because they can’t afford to live in the city. But we still have the [historically black university] that is a beacon of hope and education and possibilities.”

Burnette said serving poor and largely first-generation students is a unique commitment of Huston-Tillotson that shouldn’t be neglected due to underfunding or economic downturn.

“After [coronavirus] is behind us, we want to be standing strong. So we are small and fragile so we can’t afford to pause, we’ve got to keep going,” Burnette said.

Disclosure: Huston-Tillotson University has been a financial supporter of The Texas Tribune, a nonprofit, nonpartisan news organization that is funded in part by donations from members, foundations and corporate sponsors. Financial supporters play no role in the Tribune’s journalism. Find a complete list of them here.