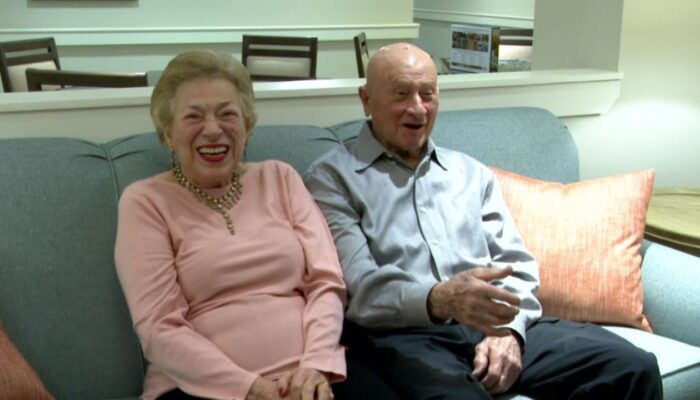 
AUSTIN (KXAN) — Rare and precious, a 75th wedding anniversary is known as the “diamond anniversary.” For one Austin couple, it’s now a vaccine anniversary.

Fred and Betty Glosser were married on March 5, 1946 in a small family ceremony. Betty still laughs thinking about how her father tugged on Fred’s coattails, when her new husband lingered a bit “too long” on their kiss.

Fred and Betty spent the last 12 months quarantining in their retirement community, the Village at the Triangle. Now, the couple and their kids have received both doses of their COVID-19 vaccine shots, so their family will get to sit down to a celebration dinner together Friday night.

“We’ll have a toast,” Betty said. ‘Then they will have a big cake that everyone will enjoy after that. So, that’s the celebration. We can’t do anything else, but that’s alright.”

She went on to say, “I’m just glad that Fred and I are here to celebrate together. I mean, how many people live to have a 75th wedding anniversary?”

They said they were thankful to staff at the facility for keeping them safe and happy during what otherwise would have been a difficult time.

The pandemic isn’t the only storm the couple has weathered, Betty said. The couple remembers everything from cross-country moves to a historic and devastating flood in their hometown of Johnstown, Pennsylvania.

Their romance began with the flip of a nickel: Fred had a ticket to a charity ball, and he didn’t know who to take as a date. He didn’t know Betty, who was a senior in high school at the time, but decided that if the coin landed on the right side two out of three times, he would ask her.

After the ball, though, Fred never called.

“It was weeks later, and I told my mother, ‘I guess he doesn’t want to take me out,’” she said.

But fate would have them meet again in a store where they both worked.

“I looked at her, and I said, ‘I know that girl. Beautiful young lady,’” Fred said — and the rest was history.

Fred’s advice? “Never go to bed angry at each other. Then you’ll have a pleasant day and a pleasant night.”

He added with a laugh, “Always be able to say ‘Yes dear, You’re right dear.’”

The couple said they are excited to get to see more of their three grandchildren and five great-grandchildren soon, once it’s safe to all be together again.

The Glossers on their wedding day, 75 years ago. (Photos provided by: The Village at The Triangle)