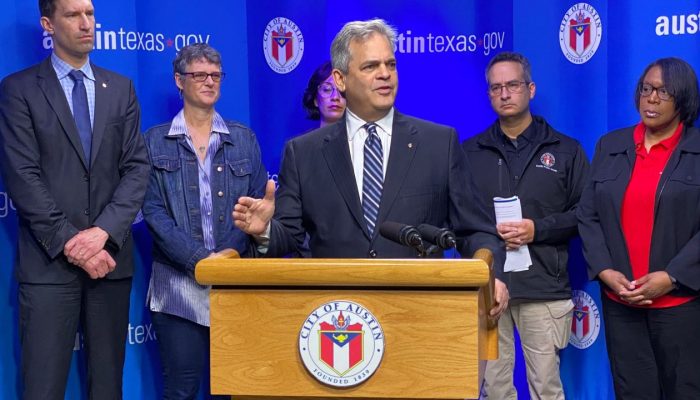 “I don’t want people to hear this conversation and getting confused that the threat of the virus is over,” Adler said. “We’re going to be dealing with this for an extended period of time, but we also realize we have to move forward. We have to find the place that protects public health and safety, yet at the same time adapt and move forward.”

Greater Austin Chamber of Commerce President and CEO Laura Huffman, called to give this announcement on the first day on the job, is leading a volunteer group of local business people that needs to “hold two things at once.”

The task force’s goal is to “honor public health priorities and focus on how to thoughtfully and safely reopen the regional economy.”

“You can count on us as a task force to hold those two things as mutual,” Huffman said. “I’m pleased to say this task force represents a wide range of our business community.”

Huffman said there’s representative from “local iconic businesses” like P. Terry’s and Kerbey Lane along with larger companies with a big presence like Dell and Samsung. Huffman said the task force’s first meeting is Friday via Zoom video conference, and it’ll be like “the Brady Bunch on steroids,” she said.

Travis County Judge Sarah Eckhardt said that if the area continues to reduce its infection rate, then hospitals won’t be overwhelmed.

“We were know is that we have reduced our infection rate by 90%,” Eckhardt said, referring to data collected and analyzed by all three hospital groups and the University of Texas. “That has kept us within our current hospital capacity. If we were to fall to below a 80% reduction rate, it would begin to overwhelm the hospital system.”

Eckhardt said with the opening of commerce, there will most likely be a rise in infections.

“There’s just no getting around that,” Eckhardt said, “but we cannot afford herd immunity. Herd immunity would mean thousands of deaths in Travis County and the five-county region.”

Gov. Greg Abbott is set to announce more details of his plan to reopen the Texas economy Monday, and the local plan will be reliant on what the governor says, Adler said.

“I don’t think we’ll know much until we see it,” Adler said. “The governor has repeatedly said he’s going to be guided by the science, the data and the doctors.”

Eckhardt said she’s worried Gov. Abbott will open the economy “too broadly,” but she’s not concerned with the recent orders that loosened restrictions on elective surgeries and the retail to-go model.

“Those are appropriate advances into adaptation,” Eckhardt said, “but I do remained concerned about other openings to commerce that will open us up to infection rates that are unsustainable.”

When asked about the potential role technology could play in increasing testing capacity and getting people back to work, Adler said he was proud of what Everlywell, an Austin-based company, has been doing to make advancements in the testing space, but the area is still not where it needs to be when it comes to testing availability.

“We do not yet have the overall testing strategy that we’re going to need over the next six months, to who knows how long, before there’s a vaccine,” Adler said. “There’s the flexibility to set a strategy once we have more tests. We’re now moving into the place where we have the opportunity to get more people tested.”

Eckhardt said the bottom line here is that residents have to come together and it’s going to “take the efforts of every single one us to get through this dark time.”

“It will be different; there is no return to business as usual,” Eckhardt said. “This will require adapting.”