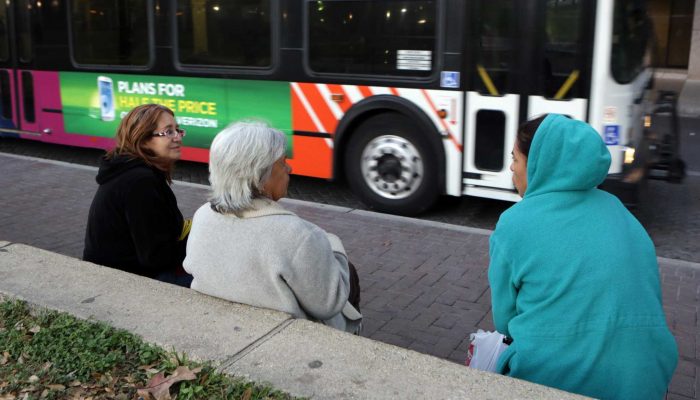 Araceli Herrera set out to organize her fellow housekeepers the most pragmatic way possible. She boarded VIA Metropolitan buses and stood at bus stops, where women from the East, West and South sides congregated.

While they waited to transfer onto buses headed north, Herrera handed out flyers about the membership organization she founded, Domésticas Unidas. It’s Spanish for united domestic workers.

The coronavirus pandemic has sent such workers home, unpaid. Most can’t file unemployment claims, and might be ineligible for federal stimulus checks and protections afforded other U.S. workers.

They’re low-wage workers, many of them “unbanked” — that is, without checking and other accounts. Among them are U.S. citizens, legal residents and undocumented immigrants. Some file and pay taxes; some don’t.

They may be among the most vulnerable San Antonians, their alienation compounded by COVID-19. Even a food giveaway, for example, can be far more difficult to navigate for those who depend on public transportation.

Over the past few weeks, Herrera has been fielding numerous calls from the group’s 400 members. She has posted information on its Facebook page, sharing whatever information is available in Spanish.

The page’s latest posts offer numbers to the San Antonio Food Bank and Metro Health; news of the suspension of CPS Energy disconnections; and information about bus schedules and food for children at school campuses.

A couple of years ago, a few of its members gathered on the sidewalk in front of H-E-B’s Central Market and held signs advocating for a living wage, demanding respect for the contractual work arrangements on which housekeepers depend.

They picked the spot in hopes employers might notice, but the reality is such workers are invisible, even to many of those who employ them.

Besides invisible, they feel excluded and abandoned, too.

“They hardly make enough to survive,” says Teresa Barajas, a former leader of the group.

Domésticas Unidas did get some good news recently. The National Domestic Workers Alliance, with which it’s connected, awarded it $20,000 in emergency aid. The local group received 50 credit cards each loaded with $400. They’ve been distributed.

Domésticas Unidas asked the city Friday not to forget its housekeepers who clean and cook and care for children and the elderly.

In a letter translated from its original Spanish, the group asked Mayor Ron Nirenberg and the City Council for help. The letter cites the yellow fever scare in Laredo in the early 1900s. Affluent families fled the city and housekeepers were left behind, the letter says.

As history repeats itself, don’t “leave us out of the share of resources,” the letter says. “We need help as much as other workers, perhaps more so because we are poorer.”

A city spokeswoman said such workers will be eligible to tap into additional Risk Mitigation Funds that will cover rent and household expenses.

Immigration status will have no bearing on aid, the spokeswoman said.

The city’s Immigrant Services Office works with individuals and families to identify available resources, she said. They should call 311. “Immigrants who access any of these benefits will not face negative consequences for using these services.”

We already know it’s not enough.

Other organizations will press city government for a separate fund aimed at those who won’t receive a federal stimulus check. This push is evolving.

I watched Herrera do outreach work to the city’s housekeepers many years ago, near Travis and East Pecan streets, a busy tersection. She told me to be there at 6 a.m., the best time to catch housekeepers on their way to work.

It was a vivid scene that showcased a city’s extraordinary work ethic. Still, the collection of tired bodies showed their days start early and end late.

What Herrera said then stays with me.

The women carrying their supplies in tattered plastic shopping bags were headed to work in Alamo Heights, Olmos Park, Monte Vista and other northern reaches of San Antonio.