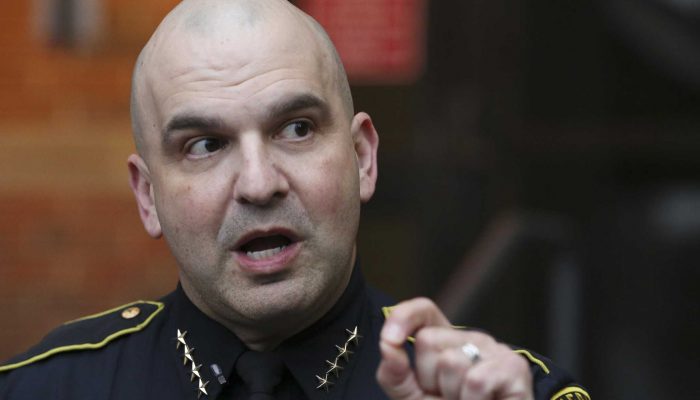 
A detention deputy with the Bexar County Sheriff’s Office who died Thursday after contracting the coronavirus had been stationed in several areas of the jail deemed virus’ “hot spots” by Sheriff Javier Salazar.

Timothy De La Fuente, a 27-year-veteran of the Sheriff’s Office, had been tested Tuesday for COVID-19 as part of an effort to screen all detention deputies and inmates in the downtown lockup where there is a growing outbreak of infections.

The following day, De La Fuente, 53, began to feel ill, officials say. He called his supervisor, who urged him to stay home.

On Thursday, as his condition worsened, he decided to seek help at an emergency facility As he got ready to leave, he collapsed in the bathroom of his North Side home. His wife rushed to his aid and called 911. He was later pronounced dead.

Later that day, De La Fuente’s body was escorted by first responders, as is customary for those who die in the line of duty, to the Bexar County Medical Examiner’s Office, where an autopsy will be conducted to determine his exact cause of death.

“I would just ask the community to continue to pray for Timothy De La Fuente,” Salazar said. “We have several hundred deputies that are hurting right now. We lost a member of our community, possibly to this illness. We are in mourning right now.”

Depending on the autopsy outcome, De La Fuente could be the first law enforcement officer or first responder in Bexar County whose death would be COVID-related. He also would be among the first statewide. No local jails have reported staff deaths related to COVID-19. The Texas Department of Criminal Justice, which runs the state prison system, has reported four deaths of prison correctional officers and one chaplain.

Officials say De La Fuente had underlying health conditions, some of which he sustained after he was attacked by a jail inmate about three years ago. Salazar said he considers De La Fuente’s death to be duty related.

“I have every intention of laying him to rest with all the honor that’s due someone in that situation,” Salazar said, pausing for a moment during a news conference to gain his composure. “We’re going to lay him to rest with full honors.”

Salazar remembered De La Fuente as a hardworking, kindhearted deputy, whom he met about three years ago, shortly after taking office. De La Fuente had been attacked by an inmate with a mop, and Salazar visited him at the hospital.

As the sheriff sat at De La Fuente’s bedside, the deputy began making jokes. Then, he asked Salazar to take a selfie with him. After he was discharged, he was posted at the front door of the jail for several months while he continued to recovered from his injuries. He made a point of shaking Salazar’s hand every day.

Bexar County Judge Nelson Wolff said it isn’t clear where De La Fuente contracted the virus. He said it’s possible he caught the virus at the jail, where 129 inmates, 49 deputies and 11 staffers have tested positive. Some of them have recovered, officials say.

A magistrate judge who worked in the jail court also recently tested positive.

Wolff said De La Fuente’s death underscores how the coronavirus can cause serious complications in people of all ages. No one is immune, he said, and as such, everyone should take precautions by practicing social distancing and wearing a mask in public spaces.

De La Fuente’s death also shows how quickly the disease can progress, sometimes with no warning, even among young people with no serious health problems.

“People think that just people that are older are dying,” Wolff said. “It can strike anybody.”

De La Fuente reported to work Tuesday with no symptoms, Salazar said, though some inmates in one of the dorms where he was stationed said he was coughing while on the job earlier this week.

De La Fuente was tested that day as part of the jail’s push to screen all detention deputies and inmates — an effort that launched Saturday, 15 days after the first inmate tested positive.

Officials have focused the first round of testing on deputies who have worked in so-called “hot spots” — areas where several inmates have tested positive. Since De La Fuente had recently worked in such an area, he was among the first deputies to get tested.

Salazar said the mass testing, which is being conducted by the San Antonio Fire Department and University Health Systems, has identified a number of asymptomatic people — including 21 inmates from the same unit.

In the last two days alone, the number of inmates who have the virus has doubled, from 64 to 129. Of those, five are hospitalized .

“What I can tell you is I’m a big fan of mass testing, even though it’s going to give us some big numbers,” Salazar said. “We are going to get more positives. They are going to skyrocket. It will give us a fill grasp of what’s going on inside this jail.”

That said, officials have warned that it could take some time to test all 3,000 inmates and 900 detention deputies. University Health Systems, which provides medical care at the jail, has the capacity to process about 150 tests a day, officials say.

At that rate, it would take close to a month to test everyone.

Salazar said that the Sheriff’s Office has taken other steps to stem the spread of the virus, first by reducing the jail population.

In recent weeks, that effort has stalled, though, due in part to the decision by the Texas Department of Criminal Justice to no longer accept transfers of new inmates to the prisons. Salazar said more than 200 inmates who are “paper ready” to be transferred.

Last week, after inmates called attention to a number of issues inside the jail, Salazar announced a number of changes. He said each inmate would receive a new mask daily, and that soap would be distributed twice a week — more often if needed.

Jailers have been instructed to increase the amount of chemicals mixed in the peroxide-based disinfectant solution used to clean common areas, and meal service has been supplemented with free items from commissary, Salazar said.

Officials have also reopened several units inside the jail that were previously unpopulated, allowing more space for inmates so they’re not sleeping “right on top of each other.”

That said, Salazar said some aspects of detention deputies’ jobs are difficult to control.

For example, officials try to give deputies the same assignment every day — reducing the number of units the deputy is exposed to — but sometimes, that isn’t possible.

“This could be my workstation for five days a week, but at some point, someone is going to come in to relieve me. We try to minimize their exposure, but sometimes that’s not possible,” Salazar said.

Worst is yet to come

Despite best efforts, officials warned that the situation could take a turn for the worse.

Wolff said the best way to prevent the virus’ spread, aside from mass testing, is to keep inmates segregated in units, not allowing the relocations from one dorm to another. At last count, about one-third of the jail population — roughly 1,100 inmates — were segregated in units.

While some correctional facilities nationwide have constructed tents in recreational yards to house healthy inmates, that is not in the works here, Salazar said. The jail, which can hold a maximum of 5,100 people, has enough space to house inmates within a healthy distance of each other, Salazar said.

But Wolff warned that it may be difficult to keep inmates spread out — especially if several deputies test positive for the coronavirus. Jail administrators need a certain number of deputies to keep each unit open, even if each unit isn’t at capacity.

Wolff said it’s possible some deputies, if they are asymptomatic, could continue to work with an N-95 mask, if need be.

Salazar said he has no plans to increase the use of personal protective gear. Currently, deputies who come in contact with people who have tested positive for COVID-19 are required to wear an N-95 mask and gloves.

At some point, he said, deputies may be required to wear a surgical gown but he doubted any additional changes would be made — such as requiring deputies to wear a full-body hazmat suit.

“There’s a lot more that goes into it. You have to realize how to put it on. How easy it is to have a pathogen get into the suit. You can only spend a certain amount of times in a suit.”

Emilie Eaton is a criminal justice reporter in the San Antonio and Bexar County area. To read more from Emilie, become a subscriber. eeaton@express-news.net | Twitter: @emilieeaton

About the Author: Emilie Eaton