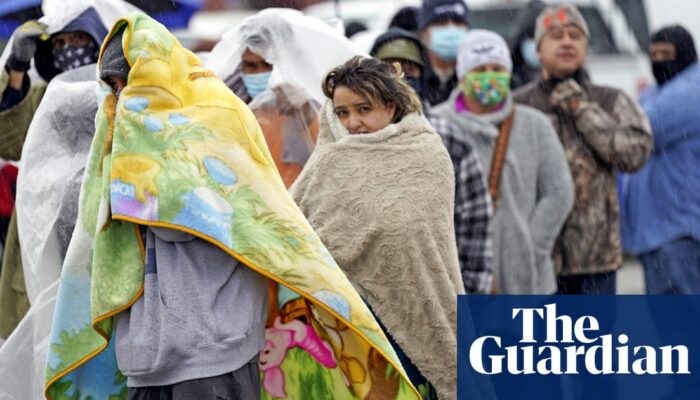 The declaration made federal funding available to individuals across the state, including assistance for temporary housing and home repairs and low-cost loans for uninsured property losses.

Though many in Texas have had power restored and temperatures are no longer below-freezing, the state is still reeling from the winter storm that pummeled its power grid and left millions without heat, food or safe drinking water. On Saturday morning, about 80,000 customers were still without power.

At least 30 people have died since Sunday, according to the Washington Post. Authorities have not released an official death toll and say it could be weeks until one is known. Some counts put the toll at at least 69.

Many say the power crisis has turned into a water disaster, with Mississippi and Tennessee among other states affected. On Friday, more than 14 million were affected by disrupted public water systems.

Half of Texas was under a boil-water advisory after water treatment centers saw blackouts. Even those with access to safe water had been told to turn off their water, for fear thawing pipes would burst, causing flooding. Residents short on water were advised to take measures including using melted snow to fill toilet tanks and contacting neighbors with running water.

“People are out of options,” Terri Willis, executive director of a community resource center in Texas, told the Guardian. “They’ve gone into survival mode to get what they can. We are all in disaster mode.”

Biden said on Friday he hoped to visit Texas next week but also said he did not want to cause a burden to local authorities.

“When the president lands in any city in America, it has a long tail,” he said, “and they’re working like devils to take care of their folks.”

In Austin on Saturday, drivers packed into parking lots as businesses finally started to reopen after nearly a week of closures. Lines wrapped around fast food drive-thrus, where soda was still served from a can instead of a fountain in light of the water-boil notice.

Pedestrians strolled the sidewalks near the University of Texas campus while “We’re Open” messages invited guests into restaurants. It wasn’t always clear if the signs were in reaction to Covid-19 or the winter storm.

‘We have no water’: Texans struggle after deadly winter storm – video report

Friends and college students Kavya Sethi and Ethan Helfman were at Home Depot to grab a bucket, in case Sethi still didn’t have water when she returned home from the hotel where they had been staying after losing power days before.

Like so many other good samaritans who have tried to fill the void left by poor official emergency management, Helfman had volunteered until midnight on Friday, handing out water to those in need. He expressed frustration with Texas Republican elected officials but felt proud of neighbors who stepped up.

“Majority of Texans are kind of in a dire situation,” Sethi said. “I think a lot of us do want to take help, and want to give help, you know what I mean? Versus just like, ‘All for one.’”

Anger has spread over attempts to spread blame for the crisis. Rick Perry, a former governor, US energy secretary and candidate for the Republican presidential nomination, was widely ridiculed after he said “Texans would be without electricity for longer than three days to keep the federal government out of their business” and expressed pride in the state’s power grid system.

“No, I’d rather not die of hypothermia,” Helfman said, frustrated.

At a Home Depot in Austin, the parking lot was packed today as roads became drivable again and many businesses reopened after widespread closures for days. pic.twitter.com/G1ScrHcapv

“Our wind and solar got shut down, and they were collectively more than 10% of our grid,” Governor Greg Abbott told Fox News’ Sean Hannity on Tuesday. “This shows how the Green New Deal would be a deadly deal for the United States.”

The Green New Deal is an ambitious package of proposed legislation championed by progressive Democrats. It is not law.

Officials at the Electric Reliability Council of Texas (Ercot), which runs the Texas power grid, have said that while all energy sources had problems, renewable energy malfunctions accounted for just 13% of energy loss under the cold conditions.

While the Texas state government has oversight over Ercot, over the last two decades Republican governors have largely left the power company to decide on costly weatherization upgrades.

Calls to better regulate the state’s power grid have become louder this week. Abbott called for an investigation into Ercot and urged state lawmakers to make a law requiring the weatherization of power plants and utilities.

“Really what Texans want, you know, aren’t things that are outrageous,” said Abhi Rahman, communications director for the Texas Democratic party, on Saturday.

“We want clean drinking water. We want to have power, we want to have electricity. And it’s our Republican leadership that has time and time again failed us on every single crisis situation.”

About the Author: the Guardian