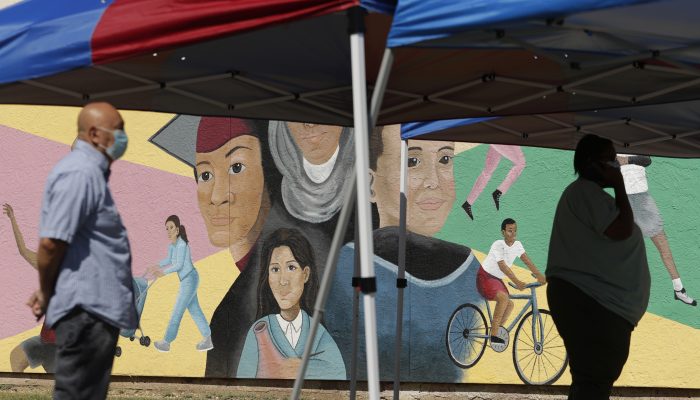 
The toll of the COVID-19 pandemic is staggering: More than 90,000 Americans have died of the disease and 36 million people have filed for unemployment since March. While the pain is widespread, it hasn’t been equal.

My colleague Stella Chavez and I have been looking into how Black and Latino communities are facing more severe health and economic consequences from the disease.

Stella, you’ve been exploring the public health side of this. What are you seeing?

STELLA CHAVEZ: The data we’re seeing now shows Black and Latino communities with higher rates of infection and in some places, higher rates of hospitalizations and deaths.

In a lot of places across the country, there are clear and staggering disparities. In North Texas, there are disparities but the data isn’t comprehensive — not all cases include race or ethnicity. So it’s hard to say anything conclusively. Still, public health experts say people of color are disproportionately affected by COVID-19.

There may also be disparities in testing, too — whether lower-income neighborhoods have access to testing as much as wealthier neighborhoods. And public health officials say we need more testing.

CHAVEZ: It’s complicated. I asked Lindsey Wilson. She’s with the city of Dallas in its ‘Office of Equity.’ She says it’s systemic.

“It’s important to know that the communities that are the most vulnerable to COVID and prolonged hardships for recovering has to completely do with pre-existing inequities,” Wilson said.

Other factors: Black and Latino communities also have higher rates of chronic diseases like diabetes and heart disease.

Where they live also plays a role — majority Black and majority Latino neighborhoods may not have grocery stores and doctor offices nearby. So they have to travel farther and use public transportation. This puts them in contact with more people and a potentially greater risk of exposure.

Families might include several generations living under one roof — and that means more people going in and out — for work.

CONNELLY: Is where people work driving these disparities too?

CHAVEZ: Look at the jobs that were deemed essential — grocery stores…factories and meat-packing plants…warehouses — these are workplaces where people of color are overrepresented and where they’re more likely to be exposed to the virus while others are able to work from home.

There’s also the question of whether these employees have enough masks, hand sanitizer to keep them safe.

CONNELLY: Even before the coronavirus hit, Texas had five million people who were uninsured — and a lot of these essential jobs have especially low rates of health insurance, right?

CHAVEZ: Right. That means these workers who are most exposed are less likely to visit a doctor. They don’t have a trusted relationship with a healthcare provider.

Sharon Davis, who’s with the clinic Los Barrios Unidos in West Dallas, says some people are also afraid of getting testing. They’re worried about their immigration status or their job.

“They know that if they’re tested that there’s a potential loss of income,” Davis said. “Our patients know that when they’re waiting on test results, they are not able to return to work, so there’s no income there for them.”

We do know that communities of color are facing serious financial challenges right now. Chris, you got into the economic data. What did you see?

CONNELLY: Yeah. Take unemployment. The picture is pretty bleak across the board — but you see higher unemployment rates among Black and Latino workers.

Among white workers, one in seven was unemployed in April. At the same time, one in six black workers and nearly one in five Latino workers were out of work.

And the federal programs to help people…they don’t appear to be reaching everybody equally either.

CONNELLY: The data isn’t clear yet, but there’s an effort to try to figure it out in real time.

For example: Earlier this week, two equal rights groups — Color of Change and UnidosUS — released a national survey that asked Black and Latino business owners if they were getting assistance from federal programs to help small businesses. Only 12% said they got the full loan they asked for…41% said their applications were denied. Some were still waiting to hear back.

That affects a lot of people in this state: About one in ten Texans live with at least one undocumented family member.

CHAVEZ: So even the programs available to help don’t help people equally.

That’s what we’re seeing. Ann Beeson from the Center for Public Policy Priorities says “one size fits all” policies aren’t good enough and that’s because of a long history of discrimination and an unequal playing field that hinders prosperity in communities of color in the best times. That’s why she thinks that the government’s response to this crisis has to include programs and policies that take into account the challenges Black and Latino workers and businesses face.

“It’s not just that the solutions need to be targeted. It’s that the outreach and communications around those solutions has to be supported and funded as well,” Beeson said. “Or you can have a program that’s a totally fine program and that would in fact narrow the gap, but that doesn’t reach the communities most in need.”

CONNELLY: After the Great Recession, she says there wasn’t enough of that…and we saw inequality deepen as the economy recovered.

CHAVEZ: The health experts I talked to said something similar — that the response should take into account the specific needs of marginalized communities.

I talked to LaTasha Jarrett. She’s the chief medical officer for the North Texas Area Community Health Centers in Fort Worth. She told me there’s a lot of skepticism in underserved communities because governments and hospitals haven’t always met their needs — and that makes it harder to get people to take the virus seriously.

“I think we have to meet people where they are and whenever you are in a group where historically you may have mistrust of authority…we have to make sure we can reach people to regain trust,” Jarrett said.

Chris, there are some efforts underway. The city of Dallas set up mobile testing sites for residents who don’t have adequate transportation — the hope is that this will help people in underserved neighborhoods.

But there are still systemic barriers.

CONNELLY: Right and compared to a lot of other states, Texas offers very little support for struggling families that’ll make it harder to overcome some of these disparities.