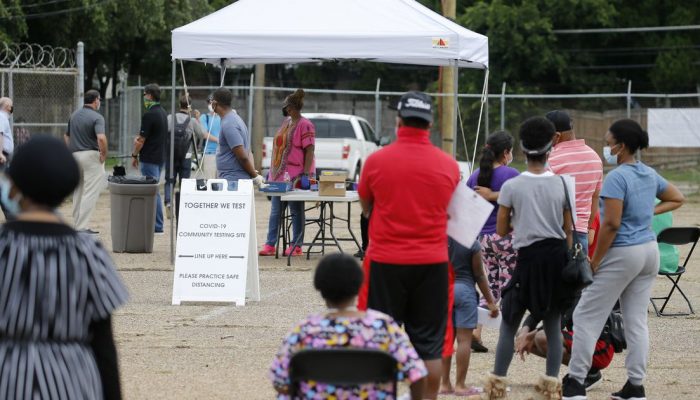 AUSTIN — About a month into the coronavirus pandemic, Shawn Thierry noticed a disconcerting trend.

African Americans make up 23% of Houston’s population, but they accounted for 66% of COVID-19 deaths.

So in mid-April, Thierry, a Democratic state representative, wrote to Gov. Greg Abbott requesting a task force to examine racial disparities in the coronavirus pandemic in Texas. The letter was signed by 49 other Republican and Democratic members of the Texas House.

Nine days later, Abbott, a Republican, said he was working with lawmakers to better respond to the pandemic’s disproportionate impact on African Americans.

But a month and a half later, state lawmakers are no closer to learning why African Americans are dying at higher rates from COVID-19 — even as Texas has begun a reopening that could lead to renewed spread.

Thierry’s task force request isn’t the only one by a black lawmaker that hasn’t been addressed. They’ve asked for better data collection for an accurate count of the disease’s impact on black and brown Texans. They’ve called for increased testing in highly affected black and brown neighborhoods.

Those requests, for the most part, haven’t been answered.

Miles, who sits on the Senate’s Health and Human Services Committee, said he has not heard a plan from Abbott’s office about how to decrease the disease’s impact on African Americans. He said part of that may be because none of the four medical advisers on Abbott’s task force to reopen Texas is black.

“I don’t recall seeing one African American on there,” Miles said. “Which leads me to believe they’re not taking it seriously.”

Royce West, a Dallas Democrat who is the only other African American in the Texas Senate, said he’d talked to Abbott’s chief of staff about the need to collect racial data for COVID-19. West said that information was necessary to craft public policy to improve the state’s response to similar diseases in the future. But his request has also gone unattended.

“I’ve not been able to get an answer from them,” he said. “It would be helpful to get the governor to help out on that.”

Abbott’s office directed questions to the state’s Health and Human Services Commission and the Department of State Health Services, agencies the governor oversees as the state’s chief executive.

John Wittman, an Abbott spokesman, said the state will significantly ramp up testing in black and Hispanic neighborhoods on Monday. He did not provide additional details.

There is ample evidence that the pandemic has disproportionately impacted black Americans.

In April, an Associated Press analysis found that of the more than 21,500 victims whose race was known and disclosed, more than 6,350 were black, nearly a rate of 30%. That analysis covered 241 million people living in 24 states and five cities for which the state data was not available, including Washington, D.C.; Memphis, Tenn.; Pittsburgh; Philadelphia; and Houston.

While African Americans made up only 14.2% of the population of those areas, they accounted for nearly one-third of the deaths.

Still, the state of Texas has struggled to track racial health disparities.

Many of the more than 70,000 confirmed cases and 1,700 deaths on the state’s case dashboard do not have information on race and ethnicity. Those are cases for which counties have reported a case, but have not completed a full investigation.

As of June 5, the state had still not received the race or ethnicity of 79% of the cases reported to the state and 63% of the reported deaths.

Without such information, experts say, the data can’t be used to solve problems.

“When we discuss moving past this pandemic, it does the communities impacted a disservice and the country a disservice to not be able to understand that data,” said Erica Spears, a health disparities researcher at the University of North Texas Health Science Center. “It’s incomplete information without race.”

Lara Anton, a spokeswoman for the Department of State Health Services, said local health authorities conduct their own case and death investigations, which they then turn over to the state.

Anton said those investigations “take time to complete depending upon the circumstances” and some do not include race and ethnicity data because people choose not to answer the question.

Hellerstedt, one of Abbott’s top medical advisers, said the state was prioritizing higher-level data on infections at that point.

“I think if we get this under control better, we will be able to expect that our folks in the field who are providing that reporting and filling in those fields are going to have enough time in the day to get it done,” he said during an April 8 news conference.

On that date, the state had compiled data for less than a quarter of the 7,276 confirmed cases in Texas. It had data for just 24% of the 140 deaths at that point.

Nearly two months later, the state’s tracking of racial demographic data is still lacking — even for the completed investigations.

Of the 15,140 case investigations the state had completed as of June 5, the state did not know the race of 1,949 patients, a rate of 13%. That rate was higher for the 664 completed death investigations, for which the state lacked racial and ethnicity data for 121, or 18%.

Despite that difficulty, Anton said the state had enough data to identify trends. For example, blacks make up 16% of the cases in Texas even though they’re only 12% of the population. But with so much of that data completed as “unknown,” the actual number of black cases could be much higher than the state’s.

Anton said the department had worked with the Texas Medical Association to “increase awareness” of the importance of reporting complete data. The association is an advocacy group for the medical profession. Anton did not answer questions about what the department had done to require improved data collection.

“We continue to look for ways to speed up the process of data reporting,” she said.

Spears said that three months into the pandemic health officials should have figured out how to collect and log that information.

“Should we have the data at this point? Absolutely,” she said. “Even if it’s difficult, it’s necessary. And it does us a disservice if we’re talking about equity to not understand the conditions under which these issues are existing and persisting in our community.”

This week, the state’s Health and Human Services Commission announced it would begin a study to examine health disparities in the pandemic. The first analysis of the study will be due in the fall.

That move came as federal health officials began requiring the tracking of race and ethnicity data for all COVID-19 tests conducted in the country.

Coleman said he did not blame the state’s health officials for not collecting the data while the pandemic was raging early. But, he said, Republican state leaders were to blame for defunding the state’s Office of Minority Health Statistics and Engagement in 2017 that could have handled that task without taking away from efforts to combat the virus.

“The state of Texas cut the public health infrastructure tremendously. The resources are not there as they were in the past,” said Coleman, who in 2001 established the task force that became the health disparities office. “Am I mad about it? Yeah, I’m mad about it. … That office would have been doing that type of surveillance in keeping those numbers.”

Coleman plans to file a bill in the 2021 legislative session to bring the office back.

It’s not just Democrats calling for action. Eight Republicans, including some of the most conservative in the House, joined Thierry’s call for a task force.

Rep. James White, R-Hillister, the only black Republican in the Legislature, said collecting racial data is necessary to respond to the pandemic.

Experts say the lack of data should not let state officials off the hook.

Courtney D. Cogburn, an associate professor of social work at Columbia University who studies racial inequities in health, said there is enough data from other places in the country to show that African Americans are being disproportionately impacted. There is also a body of research that shows the impact of other infectious diseases on the community.

“I don’t want us to just throw up our hands and say, ‘Well, there’s no data,’” she said. “Do we have any reason to believe that those risk factors are any different in Texas? And if they are not, as I suspect they are not, then you potentially have enough information to start making informed decisions.”

They also are more likely to work low-wage jobs that are deemed essential and cannot be done from home, like grocery workers, bus drivers and garbage workers; and less likely to have health insurance.

Thierry said her proposed task force could examine these issues and craft public policy to decrease the mortality rate and improve health outcomes. The issue, she said, is even more pressing because of the possibility of a second wave of mass infection later in the year.

“What happens if there’s a second wave in the fall?” she said. “Would African Americans be the hardest hit? This is what I’m trying to prevent and address.”

But despite an “extensive conversation” with Abbott’s staff after she sent her letter, Thierry said she has yet to hear back.

“During Hurricane Harvey, he said, ‘There’s a need for speed,’” Thierry said. “I want to say that in addressing this task force, there is a need for speed. My constituents are being infected at a higher rate and [even] one death is too many.”