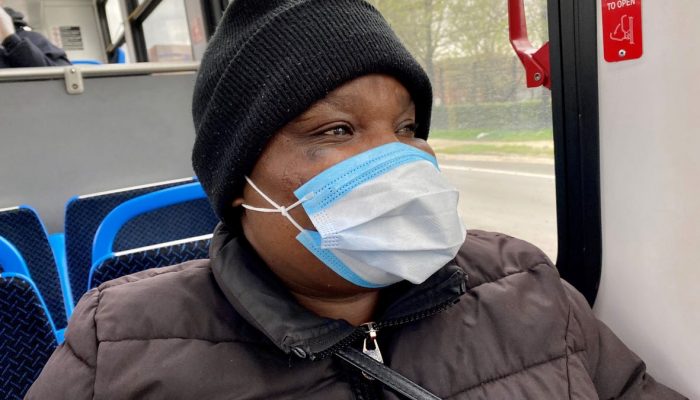 Data on coronavirus deaths in the US shows a disturbing trend: The virus is killing black Americans at a higher rate. Activists working to level out racial disparities in healthcare, food access and safety are urging systemic change. (April 10)

CHICAGO — Train tracks run above the intersection of Kinzie Street and Ashland Avenue, two major streets that meet on Chicago’s West Side. On one corner of the intersection, there’s a trampoline park and new brewery. On the opposite corner, empty buildings for lease.

In one direction, a ZIP code relatively unscathed by the coronavirus outbreak. In the other, a community decimated by the disease. One mostly white, with six-figure incomes the norm. One mostly minority and earning much slimmer paychecks.

“It creates a fertile ground for something like a virus to come in,” Shields said.

As the U.S. surpassed a milestone of one million known cases of COVID-19 this week, ZIP code data show the virus has run rampant through some neighborhoods while leaving residents in adjoining areas much less impaired.

Coronavirus impact: Black people dying at much higher rates in cities across US

USA TODAY took an exclusive look at how the pandemic has been felt in neighborhoods across the nation by collecting the ZIP code-level data from health departments in 12 states: Arizona, California, Florida, Illinois, Maryland, Michigan, Missouri, New York, Ohio, Pennsylvania, South Carolina and Texas.

COVID-19 case report summaries were assembled for more than 3,200 ZIP codes – about 10% of the nearly 33,000 U.S. ZIPs. Case data were matched with U.S. census demographic data to show how infection rates differed in ZIPs by race, income and housing characteristics.

In the poorest neighborhoods, where median household income is less than $35,000, the COVID-19 infection rate was twice as high as in the nation’s wealthiest ZIPs, with income more than $75,000.

Infection rates were five times higher in majority-minority ZIP codes than in ZIPs with less than 10% nonwhite population.

Of the top 10 ZIPs with 10 or more cases – one in Florida, one in Michigan, the other eight in New York City – nine are areas where at least two-thirds of the residents are nonwhite. Five are areas where household income is below the national median of $60,293.

Local health officials say not all neighborhood differences in infection rates are driven by race and income. Some arise from limited access to testing sites or a lack of interest among some residents in being tested. Areas with more nursing homes may also show higher rates of infection.

ackling poverty in a coronavirus-induced economic downturn: Is it too risky or the right thing to do?

From one neighborhood to the next, disparities in income, diversity and COVID-19 infections

The intersection of Kinzie and Ashland in Chicago marks the boundary between ZIP code 60642, which centers on the Noble Square neighborhood, and ZIP code 60612, which covers much of the East Garfield Park neighborhood.

Touched less severely by the coronavirus, Noble Square is a hub of young professionals bustling with a restaurant and nightlife scene. Around 60% of the population is white, and the median household income is about $101,900.

Attorney Jane Kwak, 32, was out for a walk with her boyfriend and golden doodle Thursday despite the cold, overcast weather. Joggers cruised by without masks. Some walked dogs. Many restaurants were open for takeout.

“I don’t know anyone personally who’s had it,” Kwak said of the coronavirus. “I feel like around here it’s still a bit normal. People are acting normal. Our neighbors will still chat and aren’t super fearful.”

Hard-hit East Garfield, meanwhile, is a family neighborhood located between a conservatory and an industrial corridor. More than 78% of the population is non-white, and the median household income is $41,300.

Kwak, the Noble Square attorney, took a 15% pay cut and is working from home. She considers herself lucky. But in East Garfield, janitor Jimmy Walker lost his job. So did his wife Rachel, a child care worker.

The Walkers find themselves behind on rent. They don’t have face masks or gloves, even though the Illinois stay-at-home order going into effect Friday requires masks for those going out in public.

“Man, we need a lot of help down here,” Rachel Walker said. “It’s been rough.”

“There used to be people outside all day,” Jimmy Walker said. “Now it’s like a ghost town.”

Pastor Walter McCray, who lives in his childhood home in East Garfield, said his neighbor down the street contracted the virus and that several of his associate pastors had lost family members and longtime members of their churches.

Bill Curry, who runs programs focused on youth and families in the neighborhood, said the community was hurting. “The demand for food has significantly increased,” Curry said. “Not only people who have been regulars, but a bunch of people, this is their first time going to a food pantry.”

Coronavirus in Chicago: How the mayor of the nation’s 3rd-largest city is waging her biggest fight

Across the city of Chicago, a similar pattern emerges: Coronavirus case rates are higher in majority-minority, low income areas. Many of these neighborhoods are food desserts where residents lack access to broadband. Last week, the mayor launched a Racial Equity Rapid Response Team to address the disproportionate impact of the outbreak.

“This virus is really exposing a lot of the disparities that have historically been part of these communities, even before COVID,” said Shields, whose group is part of the task force.

Consider ZIP code 60621, which includes the South Side Englewood neighborhood, where the case rate is 70 per 10,000. Nearly 99% of the population is nonwhite, and median household income is $20,000.

Resident Tammy Smith, 51, a home care aide, said a friend she’d known since she was a teenager recently died after contracting the coronavirus.”She’s gone on,” Smith said while riding the bus to work. “It has affected me, and not just me only, but family and other ones.”

Per protocol, Smith boarded the bus through the rear doors, wrenching them open by pulling on the rubber lining. A handful of other people — mostly African American and wearing protective masks — were sat spread out throughout the bus.

Poor, essential and on the bus: Coronavirus is putting public transportation riders at risk

Adjacent ZIP code 60620, which includes Auburn Gresham, has the same rate of infections.

“Our community is besieged. We are losing lives,” said Carlos Nelson, CEO of the Greater Auburn Gresham Development Corporation, who called USA TODAY from his cell phone because phone and internet was down in the neighborhood.

The trend is not unique to Chicago.

Detroit, the epicenter of the outbreak in Michigan, reported 1,000 deaths and almost 9,000 cases as of Wednesday. The surge prompted a transformation of convention centers into field hospitals.

Ira Carroll was standing on a milk crate to reach the top shelf of the freezer to restock the ice cream section at Saturn Super Foods on Joy Road in Detroit’s 48228 zip code, where the coronavirus case rate is among the city’s highest at 92 per 10,000 residents.

Saturn Super Foods is situated on an avenue lined with shopping plazas of independent businesses, including a barbershop, a diner and an auto repair place. Beyond the avenue is a quiet residential area that makes up a large part of 48228.

Ira Carroll restocks the ice cream in the frozen section of Saturn Super Foods, in Detroit’s 48228 zip code, where he has worked for 22 years.Miriam Marini

Detroit’s 48228 is where people come to stay. Families establish roots in the neighborhood, often staying in the area for generations. It’s the type of place where your childhood friend sticks around well past childhood. Median household income is $26,000, and 84% of the population is nonwhite.

Damien Lake, 23, has lived in the 48228 area for almost his entire life. He suspects this unrelenting sense of community may be a contributing factor to the area’s COVID-19 rates. “A lot of people in this area know each other, and have for years,” Lake said. “So, they want to be around each other, they want to socialize.”

Just next door to this community is Redford Township, zip code 48239, with about twice the median income and only one-eighth the infection rate from COVID-19.

Denise Martin, who’s lived in 48239 for 12 years, said Redford also has a strong sense of community. On sunny afternoons, like in many metro Detroit suburbs, it’s typical to find young moms walking with strollers or families taking their dog out for a bit of fresh air.

Martin lives on a quiet block where she knows each of her neighbors, which she said is expected of her as block captain for the Far West Detroit Civic Association.

Although her community hasn’t been hit as hard, the impact is still felt here. Martin suspected she had coronavirus in February. With her severe asthma, doctors put her on a CPAP machine to aid her breathing and she was able to recover in time for a drive-by birthday celebration for her granddaughter on April 1.

“Nobody has come to my house since the order,” Martin said from behind a mask and homemade face shield. “I have a 1-year-old granddaughter I’m looking forward to seeing. This has been the best year of my life so far with her. I want to live to see my grandbaby.”

‘Something has to change’: Latinos disproportionately dying, losing jobs because of the virus

In Jacksonville, Florida, the San Marco neighborhood, which makes up the heart of 32207, is one of the city’s most walkable. Storefronts that line wide sidewalks are usually packed. But ever since the coronavirus outbreak has shut down much of the city, the neighborhood has followed suit.

As the Florida Department of Health has updated its COVID-19 case data, 32207 has stuck out. It accounted for less than 4% of the county’s population but 18% of cases.

Jacksonville Mayor Lenny Curry’s spokeswoman, Nikki Kimbleton, said the aberration is because of the number of hospitals in the area. While state officials say they try to attribute cases to where someone lives, if they don’t know the patient’s address, they mark down the address for a health care provider or testing lab.

The other COVID-19 risk factors: How race, income, ZIP code can influence life and death

Just next door, in 32216, which is home to the St. Vincent’s Southside hospital and Memorial Hospital, the rate of confirmed coronavirus cases is a quarter of San Marco’s.

Both neighborhoods have roughly the same population, racial makeup, median household income and housing stock. However, there are differences between the two communities.

Restaurants in San Marco, with the higher case rate, are home to walk-up retail and seem to have adapted to walk-up takeout. Restaurants in 32216, home to industrial parks and much of the city’s Arabic, Latin American and Southeast Asian shopping, say they have seen a steeper drop in foot traffic.

If there really were an outbreak in the neighborhood, he said, he’d know about it. “I know San Marco as well as anybody in San Marco,” Carlucci said. “I’ve lived here all 64 years of my life.”

Grace Hauck is based in Chicago. Follow her at @grace_hauck.

About the Author: usatoday.com