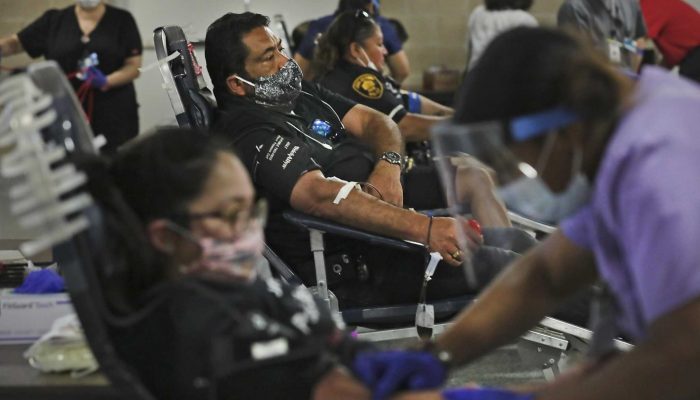 
Blood centers are no stranger to shortages. Every year, especially around the holidays, when donations and inventories dip, they know what to do — put out emergency calls to the public, hold drives at high-profile buildings and workplaces, offer gift cards and other incentives.

But the coronavirus pandemic has presented an entirely different challenge for the South Texas Blood and Tissue Center, which supplies blood products to hospitals in San Antonio and the surrounding region.

Looming fears of infection have kept people in their homes and resulted in the cancellation of more than 100 area blood drives scheduled for the summer — a loss of roughly 4,000 donations. As of Thursday, the blood bank had a little more than a two-day supply, down from the two-week inventory it had built up after an emergency appeal at the beginning of the pandemic.

It’s a problem that, like the virus, is not going away. The organization’s leaders fear that low supplies could persist for the remainder of the year, threatening to disrupt scheduled procedures and surgeries that only recently resumed in San Antonio hospitals.

The South Texas Blood and Tissue Center is collecting blood donations now through Saturday, from 9 a.m. to 5 p.m., at the Alamodome. Appointments are required and can be made by calling 210-731-5590 or visiting southtexasblood.org/give-now.

“If we can’t figure out a way to make up for that deficit in our projections, it’s going to be a very difficult summer,” said Elizabeth Waltman, the center’s chief operating officer. “There’s going to be some significant blood shortages.”

A robust blood supply facilitates the treatment of all manner of patients — gunshot and car crash victims often need emergency transfusions, surgery patients may require blood mid-procedure and people with cancer tend to lack platelets after chemotherapy or radiation. Those needs still must be met, even as COVID-19 became a major focus at some hospitals.

In March, about the time San Antonio first began to see local cases of the coronavirus, the center worked to head off an impending blood supply crisis. The blood bank held a news conference with local officials to encourage the public to come out, and Mayor Ron Nirenberg declared blood donation an essential city function.

People responded, and the center stockpiled a surplus, due to the required postponement of elective surgeries.

On ExpressNews.com: Coronavirus antibody tests have proliferated in San Antonio. Here’s the problem.

Supplies began to dwindle again in late April, when Gov. Greg Abbott lifted restrictions on elective procedures. By that time, it had become clear that the state’s hospitals had sufficient capacity to treat COVID-19 patients.

For the blood bank, it wasn’t easy to adjust to that change with little notice. Overnight, it went from needing to collect 250 pints of blood a day to double that amount, as orders from hospitals began to increase.

However, it couldn’t fall back on donations from schools and universities, which remained closed and usually account for 20 to 25 percent of donations. Blood drives that would have taken place at workplaces were also canceled, as many offices transitioned to working from home. People were hesitant to go out, including for blood donations.

Waltman said she understands those concerns, and fears of a virus about which much remains unknown. But the blood center cannot maintain a supply without the support of the community, she said.

The same problems have been raised in her weekly phone calls with representatives from other blood banks across the county.

“Where’s the blood going to come from? There is only so much that the blood center can do,” she said. “We’re very concerned, not only locally, but nationally.”

On ExpressNews.com: His COVID-19 patient got better after a plasma transfusion. To know if it worked, a San Antonio doctor is encouraging more donations.

The blood bank has instituted measures to prevent the spread of infection during donations.

On Thursday morning, as the blood bank kicked off a three-day drive at the Alamodome, phlebotomists wore masks, gloves and face shields as they worked. All had been screened for fever and other symptoms on their way in. Chairs in the waiting and donation areas were spread out, and everyone was required to wear a mask. Seats were wiped down each time they were vacated.

People could only donate by appointment, a change that has been implemented across the center’s donation sites.

In addition to blood, South Texas Blood and Tissue is collecting plasma from people who have recovered from the coronavirus. The center now has about 70 such donors giving plasma, which is being transfused into people who are still sick from COVID-19, in the hopes it will provide them with antibodies to the virus. It has sent about 280 doses to hospitals.