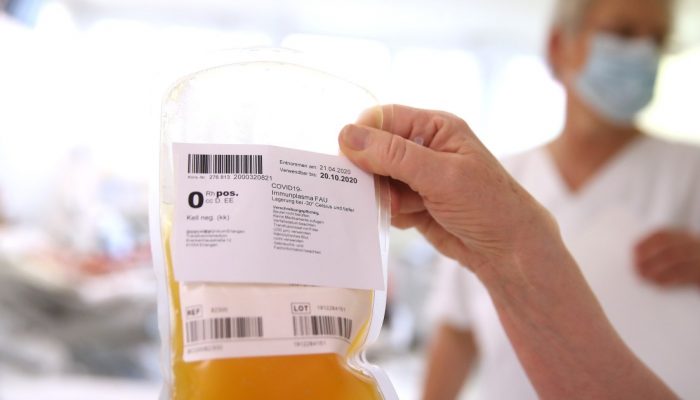 It was a Saturday night in February. A group of friends shared food and drinks at a tropical-themed party in Seattle. They wore Hawaiian shirts and sipped cocktails made with pineapple and coconut. A few days later, more than a dozen of the partygoers would fall sick with the flu-like symptoms of COVID-19.

Elizabeth Schneider – a normally-healthy, 37-year-old bioengineer – was one of them. “I just thought I had the flu,” she told FRONTLINE. It took her two weeks, but she ultimately recovered.

Schneider didn’t know it at the time, but she would soon take part in an age-old therapy being used to fight the novel coronavirus. It’s one in a collection of treatments, new and old, that scientists are now testing in a life-and-death battle against the virus.

Convalescent plasma has shown enough promise against COVID-19 that hundreds of hospitals around the country have put it to use. While still considered an experimental treatment, patients are receiving convalescent plasma through clinical trials and by way of compassionate use, which the Food and Drug Administration expanded access to earlier this year.

Convalescent plasma therapy dates back to the 1890s, when doctors transfused diphtheria patients with blood plasma from immunized animals. It was given to patients during the 1918 influenza pandemic and credited for stopping an outbreak of measles at a boarding school in Pennsylvania in 1934. It was used during the Ebola epidemic of 2014-2016, the recent H1N1 pandemic and outbreaks of SARS and MERS, two diseases also caused by coronaviruses.

In essence, the therapy relies on the antibodies, or proteins formed by immune cells, to fight infection. “So, it’s using someone else’s pre-formed immunity when the patient does not have immunity,” said Dr. Rebecca Haley of Bloodworks Northwest, a blood center taking part in a national study on convalescent plasma for treatment of COVID-19.

Recovered patients can donate their blood plasma — the liquid portion of blood — 28 days after experiencing their last symptom, the FDA states. But not all blood plasma is equal. Some people make more antibodies than others, Haley said. “We don’t know why,” she said. “They get well just the same, but some people are better antibody producers.”

But the therapy is expensive and logistically difficult to carry out amid a fast-changing health crisis. “It’s not a plan for a pandemic,” said Harvard Medical School professor Dr. Rochelle Walensky, chief of infectious diseases at Massachusetts General Hospital. “It’s very resource intensive.”

There are also risks: in rare cases, plasma recipients can experience serious adverse reactions, said Walensky. These reactions can produce swelling and breathing problems, among other potentially-fatal symptoms.

And doctors still don’t know how long recovered patients remain immune. “The jury is still out on this,” said epidemiologist Melissa Marx, assistant professor of international health at Johns Hopkins Bloomberg School of Public Health. “Based on data from the coronaviruses that cause the common cold, we expect there is some immunity for at least two weeks after infection. But longer term, we just don’t know yet. We’re too early in this pandemic.”

Schneider donated her plasma at the blood center about a month after she recovered. “I’m hoping that some of my plasma ends up in another patient who is suffering from COVID-19, and this could potentially save their life,” she said.

Doctors have also been studying other drugs, including the antiviral drug Remdesivir, which was used to treat the first patient diagnosed with COVID-19 in the U.S.

Doctors administered the drug as the man’s condition began to worsen. “By the next day, his fevers resolved and they stayed gone,” the hospital’s section chief of infectious diseases, Dr. George Diaz, told FRONTLINE Correspondent Miles O’Brien in Coronavirus Pandemic. The patient recovered and was discharged less than a week after first taking the drug.

Scientists are also looking at other drugs, including arthritis medication and two antiretroviral drugs used to treat HIV. Potential treatments are being scrutinized in hundreds of clinical trials, including a National Institutes of Health study on the antimalarial drug hydroxychloroquine.

The drug provides as good an example as any of the dire need for clinical research.

Hydroxychloroquine can pose serious side effects, including permanent eye damage and abnormal heart rhythms, a symptom that already occurs in some COVID-19 patients. The FDA issued a safety alert last Friday, warning of potentially-fatal effects when using hydroxychloroquine and chloroquine to treat the disease.

However, it came too late for one Arizona man, who died days after President Donald Trump touted hydroxychloroquine on Twitter. The man and his wife had ingested chloroquine phosphate they used as fish tank cleaner, thinking it would protect them from the virus.

There are currently no FDA-approved drugs or therapies for COVID-19. And it may take anywhere from months to a year or longer before treatments are deemed to be successful — and safe enough to administer.

“For someone who may be sick today or yesterday or tomorrow, I understand that there is an incredible hunger and demand for treatments immediately,” said Dr. Caleb Alexander, professor of epidemiology and medicine at Johns Hopkins Bloomberg School of Public Health. “But we have to do so using the best tools and the best methods that we have, and that includes rigorous assessment of whether or not they work.”

About the Author: Shantal Riley