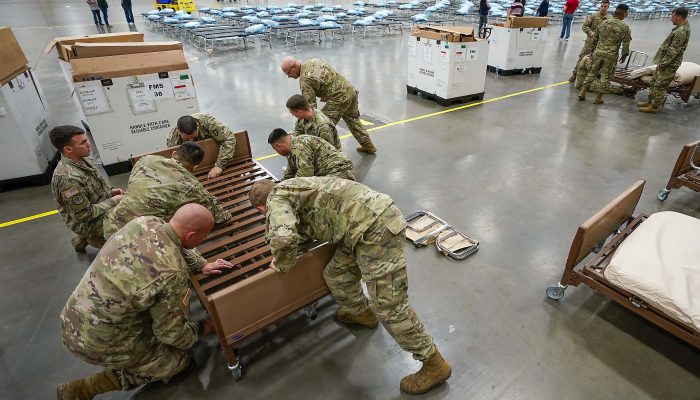 Updated at 3:59 p.m., April 7, 2020: to clarify that Jenkins is waiting on signal from local hospital council on when to open the pop-up hospital. Updated at 2:59 p.m., April 6, 2020: to include Jenkins’ letter of reply and comment from Johnson spokesman.

Abbott is managing provisions for a sprawling state where the coronavirus infection rate seems to vary widely, at least given testing constraints.

Jenkins wears the cap of emergency manager for an urban county that for a time had the most confirmed cases of COVID-19, though more recently, Harris County has overtaken Dallas for that unwanted distinction.

Jenkins is cautious about opening a 250-bed hospital that the U.S. Army Corps of Engineers erected in the Kay Bailey Hutchison Convention Center in downtown Dallas last week. On Tuesday, his office said he’s working with the DFW Hospital Council to determine when local hospitals want the pop-up facility to begin accepting patients. Last week, Jenkins said he prefers to see it used as a transitional facility, for people who no longer need critical care at an emergency room, but are not yet well enough to go home.

Abbott, who serves as middleman between the federal government and local elected officials such as Jenkins, is responsive when an Army general tells an Abbott aide there’s a problem with the new Dallas pop-up hospital. The Texas Army National Guard, which is under Abbott’s command, supplied much of the muscle.

Before the social and economic turmoil caused by a pandemic raised the stakes, though, Abbott and Jenkins had at best a fraught relationship. At the Legislature, they’d clashed over local control, constraints on local property taxes, voter ID. Jenkins has been a big Obamacare proponent, while Abbott and his predecessor Rick Perry were not.

At his near-daily news conferences, Jenkins stresses how badly Texas needs to expand Medicaid. Abbott brushes off insurance coverage questions, stressing that under bills recently passed by Congress, COVID-19 patients will get free testing and treatment.

With hindsight’s benefit, relations between Jenkins, a Democrat, and the current GOP governor almost surely were going to be tested — if not strained to the breaking point — by the challenges of rapid-fire decisions and crisis communications.

“He’s got a major urban county that will peak in terms of the coronavirus in the next few weeks,” Jillson said. “And he’s trying to get all of his assets in place, whereas Abbott has a broader, more complicated set of decisions to make – and is slower in making them. I’m not surprised that some tension has arisen.”

On Sunday, Abbott chief of staff Luis Saenz sent Jenkins a letter saying the military had informed Abbott’s emergency management czar Saturday night that Dallas County didn’t want to begin operations at the convention center pop-up hospital. If the county didn’t want it, the Army would move the resource elsewhere, Saenz warned. He told Jenkins federal officials needed to know by 5 p.m. Monday whether the county wanted the facility or not.

On Monday, Jenkins wrote Saenz saying he has every intention of using the pop-up hospital. Echoing comments he made Sunday, Jenkins urged the governor’s staff to call the next time they have a question.

“We do not appear to have open lines of communication between the County and the Governor’s office during this critical time,” Jenkins wrote. “Instead of drafting letters, I ask that you utilize the telephone for communication and coordination.”

For weeks, Jenkins has publicly demanded more aggressive edicts from Abbott to discourage large social gatherings and require Texans to stay at home except for those deemed essential employees and necessary movements to obtain groceries, medicines and the like.

While Abbott’s office has denied that past clamoring by Jenkins motivated Saenz’s public pressure on the judge Sunday, it was fair play in the eyes of retired University of Texas at Arlington political scientist Allan Saxe.

Saxe, who had polio as a child and is an admirer of Abbott’s long trek from spine-injury victim to triumphant politician, said Americans – including North Texas residents – don’t pay attention to edicts from county judges and mayors.

“The public are doing a pretty good job – they want to stay healthy,” he said.

Jenkins, he added, “seems to be a little bit aggressive in these things and it bothers me. He also seems extremely left wing on a lot of other issues.”

In the flap about the convention center, Dallas Mayor Eric Johnson said he shared Abbott’s concerns and was “stunned and deeply disappointed to hear about Dallas County’s position on the pop-up hospital.”

“His natural position would be to stand with Jenkins for Dallas’ right to have overflow capacity,” Jillson said.

Before Johnson ran for mayor last year, though, he served in the Texas House. He had prior dealings with Abbott in Austin — something Jenkins, a small businessman who was elected county judge in 2010, did not.

On Monday, Johnson spokesman Tristan Hallman explained that the mayor believed “it was wrong that the county was going to push this away when we wanted it.” He stressed that city officials first heard that Jenkins might turn away the pop-up hospital early Sunday afternoon, from Abbott aides, not the county.

Jenkins, whose role as county executive includes stout powers to act amid emergencies and disasters, relished taking the reins during the West Nile virus outbreak in 2012 and the Ebola contagion in 2014.

With his outspoken demands for fast action to contain COVID-19, Jenkins has won admirers but also has had disagreements over timing with fellow county judges who are Republicans, such as Collin County’s Chris Hill and Tarrant’s Glen Whitley.

In his own government, Jenkins has prevailed in winning the Commissioners Court approval of expanding and extending his edicts – only to face a sole “nay” vote recently cast by Democratic Commissioner John Wiley Price.

While Jenkins has had almost nightly press briefings, Abbott’s are less frequent – perhaps every two or three days. However, Abbott has frequently appeared on local TV news in various Texas markets, granting one-on-one interviews. Consumers of local TV news have always been a priority for Abbott, who outpolled fellow conservatives such as Lt. Gov. Dan Patrick and Attorney General Ken Paxton by several percentage points as all three won reelection to second terms in 2018.

Abbott has felt pressured by Patrick and President Donald Trump’s supporters to tread carefully on stay-at-home orders and give at least a rhetorical wave at concerns the economy is tanking.

Jillson said he sees a similarity between Trump’s conflicts with Democratic governors, such as Michigan Gov. Gretchen Whitmer, and Abbott’s spat with Democrats who hold local elective office in Texas’ big cities.

“I see the Gretchen Whitmer-Donald Trump dynamic at play here in the Clay Jenkins-Greg Abbott dynamic,” he said.

“You hope you don’t see it on these kinds of issues – there it is.”