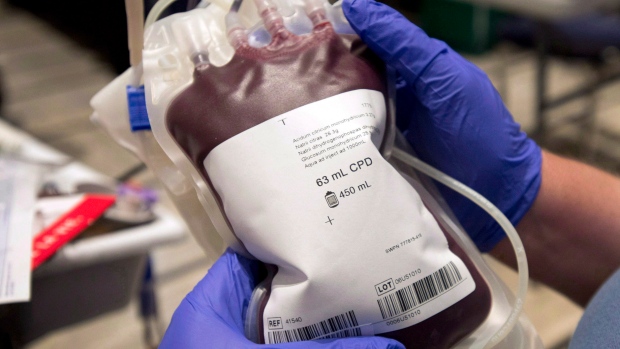 TORONTO —
In the global race to find a life-saving treatment for COVID-19, researchers at more than 40 Canadian hospitals are looking at whether the answer could be found in the blood plasma of recovered patients.

When a person is infected with a virus, their immune system produces antibodies to help fight it off. Once the patient recovers, doctors can collect these helpful immune cells from the patient’s blood plasma and inject them into sick patients to help them get better.

The approach is hardly new. Convalescent plasma therapy has been used to treat patients with SARS, Ebola, H1N1 as well as the Spanish flu epidemic of 1918.

Now, a Canadian team is testing what happens when critically ill patients receive a recovered patient’s immune cells. Similar testing is already underway in Asia and the United States, where a few very small studies have shown that patients who received doses of antibodies recovered enough to stop relying on ventilators. However, those studies are far from conclusive.

“Now this would be a process that would normally take, you know, six to 12 months without exaggeration. We banded together and somehow managed to do it in the span of about seven days,” Dr. Arnold told CTV News.

For the moment, patients who end up in hospital with serious cases of COVID-19 are often given oxygen or put on ventilators to help them breathe. This therapy helps support their body’s functions in hopes of keeping them alive, but it does not actively fight off the virus.

The hope is that transfusions of antibody-rich plasma could be an effective way to help the body attack the virus.

“In a setting where there really aren’t any options, this is as good as any. And if we can make this available to Canadians in the setting of a trial, then I think we would be doing everyone an important service,” Dr. Arnold said.

The study could be completed in three months with data by the end of the year. In the absence of a vaccine, which some doctors have projected could take up to a year to test and create, this therapy could potentially be used to give frontline healthcare workers immunity as they work to save lives.

Harnessing the power of antibodies also means that COVID-19 patients could play a major role in the fight against the disease.

Andre Valleteau, 27, tested positive for COVID-19 in early March. He described his symptoms as mild: a sore throat, cough and headache. Now that he has tested negative, he has donated his blood to help scientists at St. Michael’s Hospital in Toronto create new treatments.

“For me, it was really just that I wanted to be able to do something,” he said. “I think a lot of people feel quite helpless in this situation. And so this was an opportunity to do more than what I was before.”

Not only is Valleteau a study participant, he is also a clinical research coordinator at LMC Manna Research, which is involved in gathering volunteers for COVID-19-related studies.

In the United States, the National COVID-19 Convalescent Plasma Project has teamed up dozens of the country’s top doctors to research the blood-based therapy and provide information to healthcare researchers.

Miami Mayor Francis Suarez, who has also recovered from the illness, said he sees the plasma research as a way for healthy patients who’ve received treatment to pay it forward.

“Those of us who were fortunate enough, like I was, to experience mild symptoms or very low symptoms, have to give back,” Suarez said.