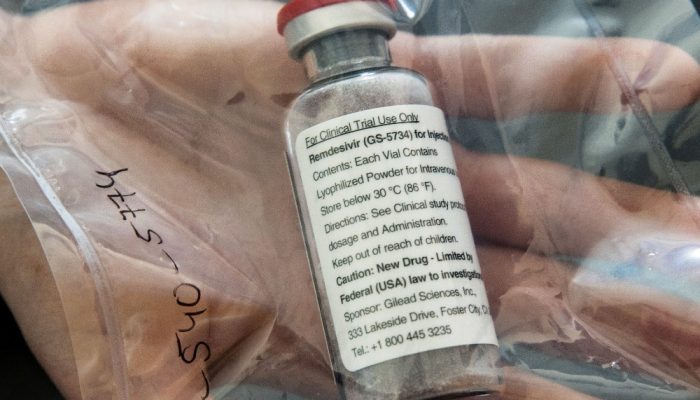 
The hopeful buzz around the drug Remdesivir and its potential as a COVID-19 treatment was so deafening Wednesday, it triggered an unexpected surge in the financial markets.

But Canadian experts were not quite so exuberant Thursday, saying they need to see more data from a promising U.S. trial before recommending the drug as a standard treatment for the coronavirus.

And even then, its benefits may be limited, they argued.

“This is not a silver bullet, this is not going to kill the werewolf,” said Dr. Gerald Evans, chair of the infectious diseases division at Queen’s University.

Some also worry about a more fundamental problem: whether there would even be enough of the drug to routinely hand it out here.

One of the Canadian trials studying the unapproved medicine has been unable to obtain sufficient stocks from Gilead Sciences, Remdesivir’s American-based manufacturer, to supply all the trial sites.

“If it is proven effective, the challenge with it, and Gilead has told me this many times, is they do not have enough drug for dissemination,” said Dr. Srinivas Murthy, who heads the CATCO study. “From a Canadian perspective, we’ve had very challenging access to Remdesivir.”

A sign is posted in front of the Gilead Sciences headquarters on April 29, 2020 in Foster City, California.

Gilead said Thursday it’s in touch with Health Canada and will seek “expedited regulatory review and approval” for Remdesivir if global trial data — once it’s available — confirms the drug’s safety and effectiveness.

As for whether it would have enough to meet demand, the company has been ramping up production worldwide — using a Gilead facility in Edmonton among others — and now has 1.5 million doses, enough for more than 140,000 treatment courses, it said In an emailed answer to questions.

Health Canada said the best way to use such experimental drugs is through a clinical trial, but said it had also approved 12 requests from doctors to treat individual patients with Remdesivir under the department’s special-access program. It allows emergency use of unapproved medicine in certain circumstances.

The drug proved ineffective in treating its original target, Ebola virus, but lab and animal studies have suggested it could be useful with patients made sick by the new SARS-CoV-2.

The excitement this week revolved around results from a Remdesivir trial where patients were randomly selected to receive either the drug or a placebo, the gold standard in medical research.

In a 1,063-patient trial run by the U.S. government’s National Institutes of Health, those administered Remdesivir recovered in a median of 11 days, 31 per cent faster than the 15 days for those given a placebo. There was also a slight improvement in death rate, but it was not considered statistically significant. The report came with no detailed scientific data, and has not been peer-reviewed.

But the results had to be released quickly because there’s “clear-cut evidence it works” and ethically the medicine should now be offered to patients in the trial’s placebo arm, said Fauci, head of the NIH branch that oversaw the trial.

The information happened to be divulged the same day as a smaller but more sobering study of 237 patients from Wuhan, China, published in the journal The Lancet.

It was cut short because of a shortage patients amid Wuhan’s waning epidemic, but found no difference in deaths or speed of recovery between the placebo and Remdesivir arms. The authors did say, though, that more study of the drug is warranted.

The medication has been offered to Canadian patients as part of at least two studies. One is a Gilead trial, where all the enrolled patients receive Remdesivir in order to “provide expanded access,” and includes the William Osler Health System’s hospital in Brampton, Ont., according to U.S. government records.

The other was CATCO, the Canadian branch of a World Health Organization trial looking at four different anti-viral drugs that might help beat back COVID-19, with 14 sites across this country.

CATCO head Murthy said if the evidence proves it works and should be the new standard of care — as Fauci suggested Wednesday — than it would no longer be ethically acceptable to run placebo-controlled studies of the medicine.

But it’s uncertain Remdisavir has cleared that bar, he and other experts say. To Murthy, a solid reduction in deaths would be a more important indication it’s effective than curbing how long someone has to stay in hospital.

Mortality is “much more unbiasable and much easier for people to understand.”

Among the information that would be important to have about the NIH study is evidence of any negative side effects, the characteristics of the patients involved and how the placebo and drug group were randomized — a process that’s supposed to ensure the two are evenly matched, said Dr. Robert Platt, a McGill University epidemiologist.

And when available, that data should be looked at in combination with the negative Lancet study, said Dr. Gordon Guyatt, a McMaster University clinical-trial expert credited with coining the phrase “evidence-based medicine.”

“What you don’t want to do is pick and choose the study that is most promising,” he said.

Evans, like others, said there are hopeful signs around the drug. But he’s concerned that news is emerging in a highly politicized environment, where even the slightest glimmer of hope is magnified.

“Everybody right now around the world wants to see a silver lining in what otherwise looks like a pretty dark cloud,” he said. “(But) we really need to see the data, to see if this is legitimately true.”