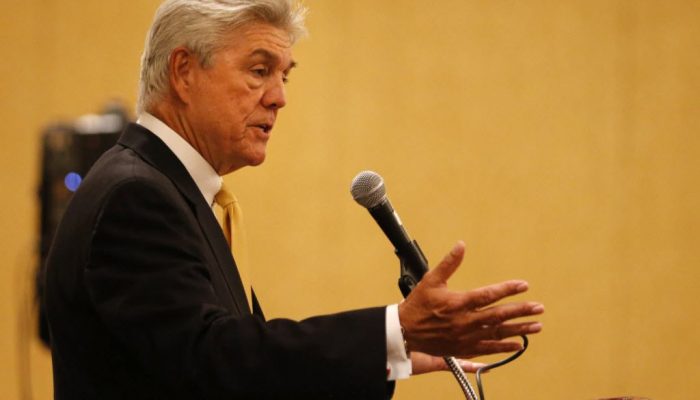 Updated at 12:10 p.m.: Revised to include comment from Julie Oliver, the Democrat running against Rep. Roger Williams in the general election.

WASHINGTON – Rep. Roger Williams has been a vocal champion of the paycheck protection program, hailing the small business assistance fund created by Congress as “needed relief” that will keep mom-and-pop operations “moving forward” amid the coronavirus outbreak.

It turns out the Austin Republican knows first-hand the loan program’s benefits.

A North Texas car dealership owned by Williams received a loan for an undisclosed amount through the fund, which is designed to allow businesses to keep workers employed through the health crisis, the dealership said Friday in response to questions from The Dallas Morning News.

Roger Williams Chrysler Dodge Jeep in Weatherford said in a statement that “like millions of small businesses across America, our family owned business was not immune to the economic damage caused by the government’s shelter-in-place orders and the impacts of COVID-19.”

“Fortunately, like countless other American small businesses, we applied through our local bank and have been able to keep over 100 employees on payroll and prevent their families from experiencing further hardships during this unprecedented pandemic,” the dealership said.

There doesn’t appear to be anything untoward about the loan – which, per program rules, can be forgiven if the funds are used to maintain company payroll over a two-month period.

Nothing bars lawmakers from accessing the fund. The dealership had to meet the same criteria as everyone else to receive a loan, which the government says it’s processing first-come, first-serve. The auto industry is among the sectors devastated by the economic fallout from the pandemic.

But the financial aid for Williams’ company comes as many other small businesses in Texas and beyond have struggled to get loan approval. Crushing demand for the paycheck protection program caused an initial $350 billion in relief to get gobbled up in a matter of days.

Lawmakers, including Williams, voted last week to replenish the fund with $310 billion more, but experts expect those dollars will also run out before everyone who needs help can get it.

Some notable public brands, including Shake Shack and the Los Angeles Lakers, have returned their loan money amid public outcry. Nearly a dozen other small business owners in Texas’ congressional delegation also told The News that they had not applied for any PPP loans.

The dealership owned by Williams didn’t indicate if it will ultimately pay back the loan or instead seek to have it forgiven.

A spokeswoman for Williams’ congressional office referred a list of questions to an outside spokesman. He responded with the statement from the car dealership, which has been owned by Williams’ family for decades.

“Our first priority has always been our employees and this will never change,” the dealership said. “We are grateful for the opportunity to continue serving our community and look forward to rebuilding together.”

Williams’ general election opponent, Democrat Julie Oliver, accused the incumbent, who serves on the House Financial Services Committee, of having ” looked out for big banks and big money for the last seven years.”

“Our political system is corrupt,” she said. “We aren’t surprised when we learn that members of Congress and mega-donors abuse their positions of public trust and power to move to the front of the line, while mom and pop businesses who are hurting in Texas got shut out.”

The paycheck protection program has emerged as a centerpiece of Congress’ response to the economic havoc wrought by the pandemic, underscoring how Main Street businesses have been hit particularly hard by shelter-in-place orders and other measures to slow the outbreak.

The relief is available to businesses and nonprofits with 500 or fewer employees. Those entities can tap a lender for a loan, which is then processed by the feds, to cover eight weeks of payroll, rent and utilities. If the firm maintains its payroll during that period, the loan will be forgiven.

The program, in many respects, has been a smashing success. Nearly 135,000 loans were approved in Texas under the first batch of money opened up in early April, totaling nearly $28.5 billion in vital support, according to the U.S Small Business Administration.

But many small businesses have been left out of the rush, given that there’s just not enough money to go around. Business owners have also complained that some lenders have been less responsive than others, leaving some firms lacking approval for loans as small as $10,000.

That dynamic has only increased scrutiny on the program, which was crafted with fewer safeguards than usual to ensure that the money would go out in a timely manner.

Most attention has focused on large, publicly traded companies, some of which used a quirk in the program to qualify as small businesses. Some are giving back the money; others aren’t. The U.S. Treasury Department has vowed to crack down on those situations going forward.

But there’s also been the prospect that members of Congress could be accessing the loan program for small businesses that they own.

It’s not uncommon for these types of scenarios to crop up in Congress, given that many lawmakers have business backgrounds. The general rule is that lawmakers can vote on legislation that could affect their business, so long as it doesn’t affect only their business.

Other restrictions sometimes come into play. In the $2.2 trillion coronavirus relief legislation passed in late March, lawmakers specifically prohibited members of Congress and other senior government officials from accessing a $500 billion fund for larger companies.

But no such provision exists for the bill’s paycheck protection program.

The House Ethics Committee in mid-April made that much clear. While it urged lawmakers to take “caution before applying for or receiving relief under” the legislation, it said that members’ businesses “may be able to apply for assistance” through the paycheck protection program.

That distinction has put government watchdogs on alert.

Jen Ahearn, policy director at Citizens for Responsibility and Ethics in Washington, said it’s not to say lawmakers’ businesses “aren’t on their own deserving.” But she said conflict of interest measures are necessary to avoid a host of thorny situations.

“Any time you have somebody – not just members of Congress, but other powerful government officials, too – involved, it just means you have to ask questions about how the money is being administered,” she said.

Adding to the concern is that no list has been made public of who has received the paycheck protection program loans; it could be months before that kind of information is made available.

To see if any members of Texas’ congressional delegation might be utilizing the small business relief, The News reviewed lawmakers’ personal financial disclosures for 2018, the most recent year available, to determine who has an ownership stake in a potentially eligible firm.

Of the dozen or so lawmakers who could fit the profile – both Republicans and Democrats – nearly all said they had not applied for such loans.

“They have not received or applied for any funds,” said Jason Johnson, a spokesman for Rep. Vicente Gonzalez, D-McAllen, who owns a handful of businesses with his wife. “They have so far kept their employees on at their own expense.”

But the office of Rep. Mac Thornberry, R-Clarendon, declined to say whether a cattle operation co-owned by the congressman had applied for or received a paycheck protection program loan.

Thornberry press secretary Jessica Graff said the congressman was “unavailable for comment,” even though Thornberry issued two news releases – including one about the paycheck protection program – in the week between The News’ first inquiry and Graff’s response.

Williams was the only lawmaker contacted by The News who said one of his companies had applied for or received a small business loan.

The auto industry, no doubt, has taken a drubbing amid the coronavirus outbreak. Car sales started plummeting as the pandemic took hold in March, with every major automobile company reporting first-quarter drops, according to the Wall Street Journal.

Roger Williams Chrysler Dodge Jeep is also not the only North Texas dealership to receive a PPP loan.

Williams, first elected to Congress in 2012, often cites his experience as a small business owner in explaining his positions on various issues before Congress. The family-owned business’ success has also made him one of the richer members of Congress, according to financial disclosures.

While the congressman has repeatedly praised the paycheck protection program – and stressed the need to give it additional funding – in interviews, news releases and social media messages, he had not previously detailed his company’s own experience in receiving a PPP loan.

Williams represents a traditionally GOP district that stretches from the outskirts of North Texas to downtown Austin. His matchup against Oliver in the general election is a rematch from 2018, when Williams won by nine percentage points.