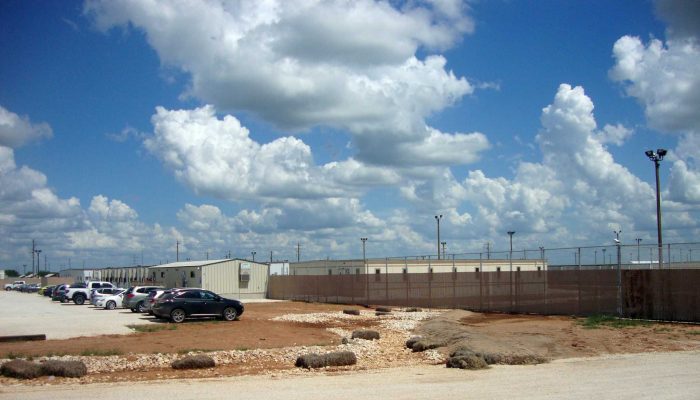 COVID-19 has even changed the way people protest.

Dozens of immigration demonstrators plastered their vehicles with slogans bashing Immigration and Customs Enforcement on Sunday, parked outside of the agency’s San Antonio office on the Northeast Side and leaned on their horns.

“We as organizers need to get creative to continue to raise our voices for the most vulnerable,” said Carolina Canizales of SA Stands.

At issue is the agency’s alleged inaction when it comes to protecting immigrants in their custody at facilities in Pearsall and Dilley as well as in Karnes County. So far, no cases of COVID-19 among detainees or employees have been reported at those sites.

But ICE has not provided protective face masks or hand sanitizer to detainees in those facilities, said Debra Hernandez, an organizer for Refugee and Immigrant Center for Education and Legal Services. Nor has the agency given detainees soap or cleaning supplies for shared bathrooms or allowed social-distancing, she said.

A ICE spokeswoman pointed to the agency’s website, which broadly disputes the claims made by protesters. The agency does provide supplies like soap and hand sanitizer to detainees and houses those deemed particularly at risk for contracting the disease away from others.

ICE says it has opted to reduce the population at its detention facilities by at least 30 percent and has been staggering meal and recreation times to increase social distancing.

During Sunday’s protest, a few dozen people with RAICES and SA Stands gathered outside of ICE’s San Antonio office, calling on the agency to release all detainees to prevent the spread of the outbreak.

Vans, SUVs, trucks and cars bore messages like “free them all, “prevent mass death” and “ABOLISH ICE, STOP THE SPREAD.”

If protesters left their vehicles, they wore face masks and kept their distance from one another — a marked contrast with conservative demonstrators who gathered in front of the Texas Capitol on Saturday calling for stay-at-home restrictions to be lifted.

“We’re all trying to stay as safe as possible,” Hernandez said. “But we need to send the message that, if we don’t let these people out of detention centers, everybody’s going to get COVID.”

Hernandez said people being held in those facilities are getting sick.

“There are families there that already have sick children, children with diarrhea, throwing up,” Hernandez said.

Each facility houses about 200 families or detainees, Hernandez said, and ICE has been releasing some.

Almost 700 detainees have been released from ICE custody nationwide after they were deemed higher risk for having severe illness, the agency says. ICE has also limited how many new detainees it brings into detention centers, it says.

Fear of the virus already has sparked tension within ICE facilities. Guards at the Pearsall immigrant detention center pepper-sprayed about 60 immigrants who rioted in March and demanded their release because they feared they would catch the disease.