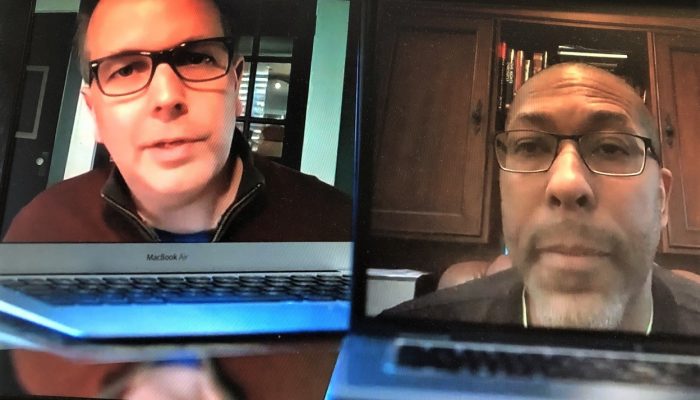 My name is Jim Schutze. That’s it. Look again. No M.D. after the name, no Ph.D., not even an M.A. or an M.S. I’m working on the basis of a liberal arts bachelor’s degree from about 100 years ago, every syllable of which I have forgotten, gone, zap, sadly no longer with us.

But I know that. I know I’m not a scientist. I know that for sure. I’m a journalist, which means I’m a generalist and an expert in nothing.

If I’m going to try to tell you about testing dead bodies for COVID-19 or measuring the size of a pandemic or anything like that, I am going to reach out first to people who actually do know what they’re talking about. In fact, the most important skill in what I do for a living is knowing what I don’t know. That way I know when I need to make a call.

That brings me to all of this absolutely crazy stuff going on now about hydroxychloroquine, the drug the president has been promoting as a therapy to fight COVID-19 infections. And I promise you right off the bat, this is not going to be a Donald Trump-bashing fiesta, exactly.

I am not here to tell you that hydroxychloroquine does not work or will make you grow a third eyeball or anything like that. I have absolutely no idea. In fact, this isn’t about the drug so much as journalism.

Tuesday night WFAA Channel 8 carried a story under the headline, “39 elderly Texans successfully complete hydroxychloroquine treatment for COVID-19, doctor says.” Jason Whitely introduced it by saying, “What happened at a Galveston County nursing home over the last week was one of the first big tests of hydroxychloroquine to treat COVID-19 patients in Texas.”

Whitely told viewers that Dr. Robin Armstrong, staff doctor at a nursing home in Texas City, near Galveston, gave the anti-malarial drug to 39 COVID-positive patients and claimed total success. Whitely reported that “Dr. Armstrong said no one experienced any side effects.”

Had Whitely boned up a bit before his interview — as in reading what other news outlets already had published a week earlier — he would have been equipped to ask Armstrong about the guy who died after taking hydroxychloroquine for one day, according to a report on KPRC-TV Channel 2 in Houston.

Whitely might have asked Armstrong about the guy who died after taking hydroxychloroquine for one day, according to a Houston TV station.

He also might have pushed Armstrong a little harder on the two patients who had to be sent to a hospital after taking the drug. Whitely says Armstrong dismissed those cases as involving “unrelated conditions,” a fall and dehydration. But Whitely doesn’t say how Armstrong knows the fall and the dehydration had nothing to do with fragile elderly people taking a powerful drug known to have significant side effects.

I know this may sound crazy and way over the top, like I’m some goony print-media nerd who doesn’t grasp the realities of modern TV news gathering, but I don’t think it’s too much to ask that a reporter at least Google something like this first. It took me about two seconds to find an article on bioethics.net specifically addressing Armstrong and the Galveston nursing home experiment.

The author, Craig Klugman, is a Ph.D. and professor of health sciences at DePaul University. Klugman is one of several experts who are comparing Armstrong’s experiment with an infamous study carried out between 1932 and 1972 at the Tuskegee Institute, now Tuskegee University, in which effective treatment for syphilis was withheld from subjects without their informed consent over a period of 40 years while some of them were wasting from the disease and could have been saved.

In his piece about Armstrong on bioethics.net, Klugman says this: “His ‘observational study’ echoes language used to justify the Tuskegee Study and the Guatemala Syphilis Studies. And Armstrong’s work shares many of the same faults but is more poorly designed.

The study found no significant difference in the death rates of the two groups. But it did find significant, potentially life-threatening heart problems in the group that took the hydroxychloroquine.

“He reports, ‘It’s actually going well. People are getting better.’ Of course, he hasn’t stated what ‘getting better’ means. Nor has he provided any information on what data is being collected, what doses of medication are being used, or what records are being kept.

“If this is indeed a real trial, then why is it not listed at clinicaltrials.gov? But let’s be honest, what Armstrong is doing is not research. This is not an attempt to find generalizable knowledge. He is not even proving that people are getting better because he’s not measuring and does not have a control group.”

In the WFAA piece, Whitely makes only the most glancing reference to who and what Armstrong really is and really is about: “Dr. Armstrong is a Republican activist and said he supports the president.”

It’s a bit more than that. Fully a week before WFAA did the story, The Associated Press reported that Armstrong, a Republican National Committee member and GOP activist in Houston, went through Texas Lt. Gov. Dan Patrick, a strong Trump partisan, to get his supply of hydroxychloroquine. The AP reported that Republican Texas state Sen. Bryan Hughes is organizing a national “pipeline of hydroxychloroquine donations” through Republican Party leadership.

The day before the WFAA piece ran, the conservative advocacy group Judicial Watch crowed that hydroxychloroquine, which it calls HC, has already become a great Trump victory. The group said Trump’s advocacy of the drug encapsulates “his preference for outside channels, distrust of experts, deregulatory impulses, use of social and conservative media.

“We’ll have answers soon enough about HC,” Judicial Watch said in its one broadside. “But for now, it looks like the president has placed a winning bet.”

The president’s enthusiasm for the anti-malarial drug stems in part from French reports that doctors there thought they had seen good outcomes in COVID-19 patients treated with the drug. When scientists and physicians complained about a lack of disciplined scientific study, the pushback was that this is an emergency and that complicated scientific studies take too long.

Well, maybe not that long. This week CNN reported that French scientists have completed a study of 181 COVID-19 patients who had double pneumonia and required supplemental oxygen. Half received hydroxychloroquine within 48 hours of being admitted to a hospital and half did not.

The study found no significant difference in the death rates of the two groups. But it did find significant potentially life-threatening heart problems in the group that took the hydroxychloroquine, a side effect known to be associated with the drug.

And I’m not claiming a slam dunk either way. We don’t know. Even if there are side effects and even if the effectiveness of the drug is not easy to measure at first, the possibility remains that the drug may have some useful role in fighting the virus.

But here’s the thing. Well, a couple of things. The first thing is that, if such a role exists for the drug, it is not going to be discovered by state senators. In fact, and a little sadly, apparently the answer is not going to be discovered properly by physicians who are passionate political partisans with access to nursing-home patients and political pipelines of hydroxychloroquine.

Scientists and physicians trained in the art of the blind study are who will come to this answer, and no one else. No one. It is not discoverable by state senators. At all. Nor is it discoverable by online political provocateurs (or I’d try). I know this is a lot to take in, but it is not even discoverable by presidents of the United States. AMAZING!

Scientists. Physicians. That’s it. Does that seem exclusive or unfair, snotty somehow? Do you think we should all have a chance to decide whether hydroxychloroquine is effective against COVID-19? Well, if you think that, you’re just wrong. We shouldn’t have a chance. We don’t. We can’t.

I said two things, and the second thing is what I really set out to talk about in the first place. We hear a lot about fake news and media bias these days. Listen. I think accusing us of having a grand political agenda which we work fiendishly to palm off on the public gives us way too much credit. Fake news is not the problem. It’s stupid news.

It’s 2 p.m. Somebody hands you some pages and says, “Get a story ready for 6 p.m. about this doctor in Galveston finding a cure for COVID-19.” There is a word you are looking for. You must hunt for it. You must find the word. It is a very important word in journalism.

No. The word is no. You have to say no. You have to say, “I am not doing a story for 6 p.m. saying that some doctor nobody has ever heard of, who has no connection to any kind of credible research institution and no reputation or credentials in the field has suddenly on his own come up with a cure for a pandemic that has been ravaging the planet for four months.”

Because it’s stupid. Without the qualifications, without the other side, without a serious attempt to talk to people who actually know what they’re talking about, the story is monumentally stupid, and it makes the TV station look stupid. At the very least, a TV station ought to have some idea how the world works, and this is not it. This is not even close.

We are a highly developed, wealthy, industrialized nation with a dense scientific and academic infrastructure. We used to have a culture that understood that state senators did not cure pandemics. I don’t even get what’s going on anymore. That’s it. I’m done here. I’m going to go try to cheer myself up by watching the end of Chernobyl.

Jim Schutze has been the city columnist for the Dallas Observer since 1998. He has been a recipient of the Association of Alternative Newsweeklies’ national award for best commentary and Lincoln University’s national Unity Award for writing on civil rights and racial issues. In 2011 he was admitted to the Texas Institute of Letters.