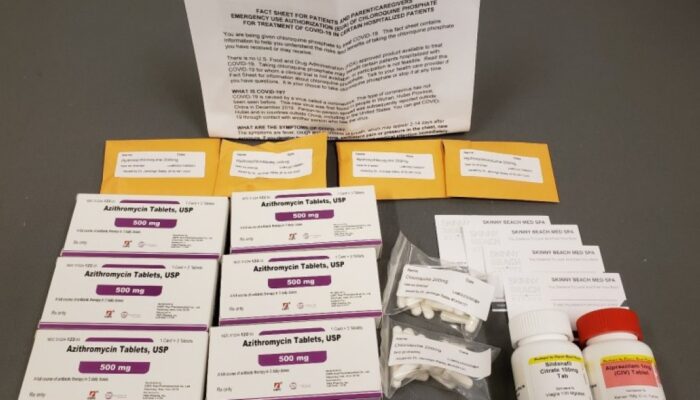 A San Diego doctor already accused of promoting a controversial COVID-19 treatment as a “magic bullet” is facing new charges, substantially broadening the scope of the federal prosecution against him.

Dr. Jennings Ryan Staley, owner of Skinny Beach Med Spa in Carmel Valley, began offering hydroxychloroquine after some research early on in the pandemic identified the malaria drug as a potential COVID-19 treatment. President Donald Trump was among those who publicly announced he took the drug as a preventative step.

But the drug was not authorized for COVID-19 treatment, and any use under a U.S. Food and Drug Administration emergency authorization would have to follow stringent guidelines.

Federal prosecutors say Staley did not adhere to those guidelines and instead set out to sell “COVID treatment packs” while touting the drug as a cure.

Staley was charged with one count of mail fraud in April. And on Wednesday additional charges of unlawful importation, aggravated identity fraud and false statements were unsealed.

Prosecutors say Staley tried to procure the drug from China by any means necessary, including authorizing a seller’s suggestion to mislabel the shipment as “yam extract.”

Once the FBI served a search warrant on his medical offices, Staley tried to cover his tracks with additional messages to the seller directing him to properly label the packages, the indictment states.

He also suggested the same ruse to another seller, according to messages gathered in the investigation. “Will it get out of customs,” Staley allegedly asked.

When the seller said he didn’t know, Staley offered: “Will you label it as yam extract? Maybe we can label the shipment paperwork to not raise flags.” The seller responded, “(S)orry, we must do it legally should label as it is otherwise the customs won’t release.”

A shipment from China did arrive that Staley thought to be hydroxychloroquine mislabeled as yam extract, but unbeknownst to him the powder was actually baking soda, the court records state.

Staley is also accused of using an employee’s existing prescription for hydroxychloroquine to fill orders that he could then sell to clients, according to the indictment.

The employee suffers from lupus, which is often treated with hydroxychloroquine as an approved use. But Staley wrote sham prescriptions in her name for rheumatoid arthritis — another approved use — without her knowledge or permission, the indictment states.

The FDA revoked its emergency use authorization of hydroxychloroquine to treat COVID-19 in June after more research showed the drug was unlikely to be effective and presented potential serious side effects.

Staley has pleaded not guilty in the case.

His attorney, Patrick Griffin, has denied any wrongdoing by the doctor, pointing to Trump’s own promotion of hydroxychloroquine and a federal stockpiling of the drug at the time. Griffin also said that it was the broker who insisted on labeling the product as yam extract due to a temporary ban in China on exports to the U.S., and that no drug was actually imported.

The lawyer called the identity theft baseless, as well.

“Dr. Staley did not steal anyone’s identity because that person was working hand in hand on the procurement with full knowledge of everything that took place,” Griffin said in an email statement Thursday.

“The key to this case is context and understanding Dr. Staley’s intent,” he added. “The government has presented only a tiny fraction of the entire story.”

About the Author: San Diego Union-Tribune