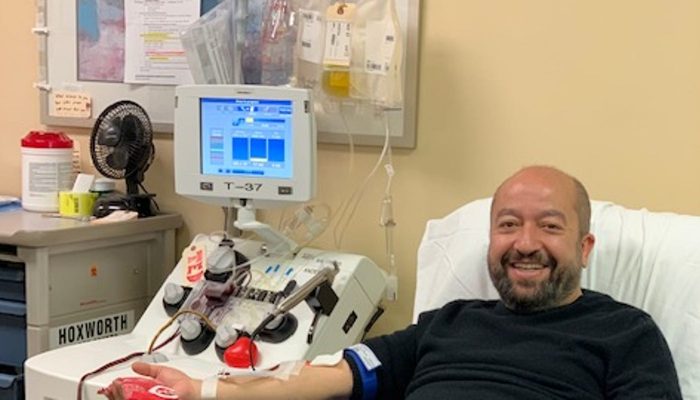 It’s hard to imagine two more eager blood donors than the men who bared their arms Friday and made Cincinnati’s first contributions to a just-begun clinical study of plasma as a treatment for the lung disease resulting from the novel coronaviruss.

“I am feeling so good, feeling so much energy,” said Mohammad Alagha of Clifton, an engineer at General Electric, mere hours after making the first donation to Hoxworth Blood Center, which is producing the plasma for the clinical trial in the region. “I’m encouraging people who were sick to do that, to see if they can qualify to donate.”

Mohammad Alagha of Clifton was the first donor April 17 to Hoxworth Blood Center’s collection of blood plasma to study as a treatment for COVID-19 at UC Health and the Christ Hospital Health Network. (Photo: Provided)

“I knew the study was coming out, that some places were trying the protocol, and I was happy to donate,” said Dr. Robert Ernst, a UC Health radiologist and the second donor.

UC Health, the Christ Hospital Health Network and hospitals across the nation are testing plasma donated by people who have recovered from the lung disease COVID-19 as a treatment for those still ill. Blood testing can indicate that someone who recovered from a bout with COVID-19 has blood antibodies that may provide some immunity.

[ Please support The Enquirer’s coverage about the local outbreak of the novel coronavirus and COVID-19 with a subscription. ]

Treating people with blood plasma fortified with antibodies is a practice of about a century. Patients in the 1981-1919 flu epidemic, the H1N1 flu outbreak and the Ebola virus spread received plasma from recovered patients as treatment. Plasma is the liquid that makes up the largest part of human blood, roughly 55% of its content.

Plasma has not been government approved as a treatment for COVID-19 cases. But on April 3, the U.S. Food and Drug Administration allowed emergency studies of plasma for COVID-19 in part because one trial in China showed plasma reduced the virus load in five patients.

Last week, the Christ Hospital announced that it would participate in the plasma study, and earlier this week, UC Health said it would also. Hoxworth would handle collection and supply.

In that short time, more than 160 people offered to donate, but Dr. David Ho, the blood bank’s chief medical officer, said potential donors must be screened first. A donor must either have gotten a positive test for the coronavirus while sick or a blood test after recovering that shows the presence of the protective antibodies.

Alagha and Ernst were the first two people to clear the screening to donate. Ernst, 58, remembered the bout with COVID-19 as “different than the typical flu. There was unusually bad pain, in my back, the worst that I ever had, and I lost my sense of taste.” Ernest wasn’t sick enough for a viral test but got a blood test later that found he carries one of the two antibodies for the novel coronavirus.

Oh said each donor will give four times. Oh expects that plasma ready for use in the study could be delivered as early as next week to a hospitalized COVID-19 patient in the Cincinnati area.

He said Hoxworth is working now to develop its own blood test to look for antibodies in recovered patients, but he said availability would be several weeks away at least.

Dr. David Oh, chief medical officer at Hoxworth Blood Center, is part of the clinical trial into the use of blood plasma from recovered COVID-19 patients as a treatment for people still sick. (Photo: Provided)

Oh cautioned the unproven plasma treatment likely is not a cure. “In those five patients in China, they still had a clinical course that was prolonged,” he said. “It’s not like where we give them this, and they rise like Lazarus.”

But the treatment appears to decrease the presence of the virus, allowing the patient to start healing just by easing the body’s burden. “It’ll take time and many patients to see how effective this is.”

UC Health is using a protocol developed through the Mayo Clinic for its arm of the clinical trial on convalescent plasma. Christ Hospital will use another measure developed by Dr. Dean Kereiakes, medical director of the hospital’s Heart and Vascular Center and of the Carl and Edyth Lindner Research Institute at the hospital.

Kereiakes said a key value of plasma as a treatment is that plasma can be frozen at -13 degrees Fahrenheit for up to a year. So if plasma proves effective, it could be stored and for use should the infection surge later in the year, as some public health officials fear.

Cardiologist Dean Kereiakes at the Christ Hospital Health Network is leading an arm of a clinical trial into the use of blood plasma from recovered COVID-19 patients as a treatment for those still sick. (Photo: Provided)

Kereiakes said early research suggests the hearts of COVID-19 patients suffer damage before they go into lung failure. Measuring the levels of a heart enzyme called troponin could be useful early in treatment in deciding whether to give convalescent plasma.

“We believe we have stumbled upon a very highly predictive marker that is readily available that appears to occur often enough to give us a better shot,” Kereiakes said.

Alagha and his wife, Laurie, got sick in mid-March and self-isolated at home until they recovered, away from their two young adult children. The engineer studied the plasma testing protocols before signing up to donate and even though the treatment is unproven, he wanted to participate as soon as he could.

He said he was especially motivated because his mother, in her 80s, still lives in his native Iran, one of the pandemic’s hot spots.

After Friday’s donation, Alagha said that despite the day’s cold and rain, he was cooking outside, maybe a lamb shoulder.

The Enquirer wants to hear from you about how the coronavirus has affected you or your community. Please use the form below to share your story.