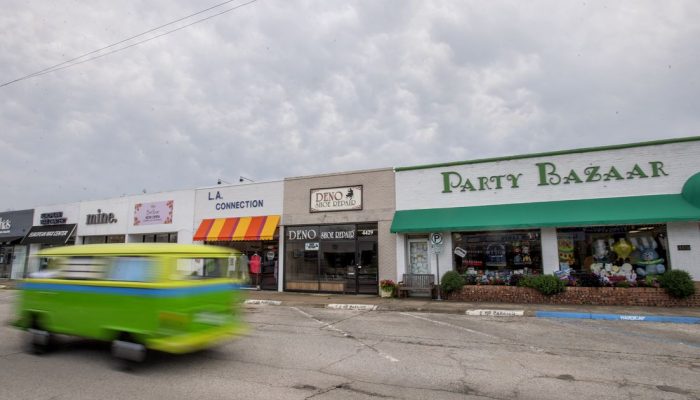 AUSTIN — Concrete floor company owner Jeremy Cox of Dallas didn’t get any of the federal coronavirus money for small business before it ran out last week – though he tried.

Cox, a “marketing guy” who invested in East Dallas-based Craftsman Concrete Floors last fall, said he was just taking it to new heights when the pandemic hit.

Since stay-at-home orders designed to stop the spread of COVID-19 kicked in last month, Craftsman’s revenue has plunged by 60%.

“Yeah, it would be a lot easier with some intervention from one of these programs,” he said, referring to a “paycheck protection program” passed by Congress and signed into law by President Donald Trump. On Thursday, it ran out of funds being loaned to small businesses.

Cox and many other entrepreneurs slammed by the public-health isolation measures, though, are just learning about a patchwork of other attempts by local governments and private concerns to rescue Texas’ small businesses.

The efforts are far more limited than, and not as well-publicized as, the federally financed program run by the Small Business Administration. It mostly has depended on banks to take and process applications. But local business groups and nonprofits are also getting into the act.

Chamber of commerce-type booster groups are rushing to fill information gaps with education, because many small business owners may not know where they can get help.

For instance a website of the Dallas Entrepreneur Center lists loan programs and the San Antonio-based LiftFund, formerly known as Accion Texas, has been charged with rushing out to distressed small businesses at least $34 million in emergency credit from local government and private sources.

“They don’t realize that we as nonprofit financial institutions can administer the PPP program,” said Janie Barrera, president and chief executive of LiftFund, referring to the federal program.

The Trump administration didn’t include nonprofit microlenders such as LiftFund, known as “community development financial institutions,” in the paycheck protection program until early last week, Barrera said. By then, the first tranche of $349 billion nationwide was nearly exhausted, she noted.

“We were only able to put nine loans out on the street,” she said.

Dallas small business owner Gail Davis succeeded in obtaining one of the federal loans early – but only because of advantages gained from intensive dialogue with peers.

Davis owns GDA Speakers, a speaker’s bureau in Uptown that had to lay off three of its 10 employees when corporations and trade groups started cancelling large in-person meetings last month.

Weeks before that, Davis said, she’d begun swapping ideas with fellow members of the International Association of Speakers Bureaus and colleagues in national, local and women’s branches of the Entrepreneurs’ Organization, in which she’s active.

Speaking of her $150,000 federal loan, which came through April 9, Davis said, “I’m not sure that would’ve happened if I hadn’t been connected with those various groups that were all communicating, hopping on Zoom calls, sharing with each other.”

While the Texas county, city and private small business rescue efforts only have millions of dollars to give away, not billions, they have some advantages – speed, for one, and greater accessibility.

At least in the case of loan and grant programs being stood up by Democratic-leaning elected officials in some of Texas’ most populous cities and counties, the efforts tend to be more narrowly targeted — aimed at the smallest and newest of businesses.

That includes those lacking a strong history with a commercial lender, especially in low-income neighborhoods.

Earlier this month, a Harris County program which aimed to distribute $10 million in loans to small businesses slammed by the COVID-19 shutdown was oversubscribed within 28 hours – by a factor of 15.

Commissioner Adrian Garcia, who persuaded his two Democratic colleagues on the county’s five-member commissioners court to tap its rainy day fund, said the loan-application website had to be shut down after 7,135 business owners sought more than $152 million, a sign of how hard-hit small firms have been hit by the novel coronavirus.

“This program will get money to local small businesses incredibly fast, … from application to distribution of funds to businesses that are desperate for a lifeline,” Garcia said.

“It does not give any preference whatsoever to any business because of their relationship with their financial institution, which is what has been suggested has been an issue for folks who have applied for PPP loans.”

With many small businesses struggling — such as these closed shops near Inwood and Lovers Lane in Dallas, shown late last month — a variety of local governments in Texas and private entities are rushing to give forgivable loans and grants.(Jeffrey McWhorter / Special Contributor)

Meanwhile, the cities of Dallas, Fort Worth, El Paso and Corpus Christi – as well as smaller suburban cities in North Texas such as Rowlett and Royse City have cobbled together a varying mixture of federal, private and city funds for similar pushes.

With forgivable loans and outright grants, the hastily erected giveaway programs’ goal, as Gov. Greg Abbott stressed last week, is to tide small businesses over — in hopes they won’t lay off or furlough their workers.

“What this capital will do is provide these companies with resources they need to keep employees on the payrolls for the remaining few weeks or so until businesses can begin that process of opening back up,” Abbott said as he announced a $50 million contribution toward Texas small businesses’ survival.

Half went to LiftFund, which offers help to small businesses across the state. Though it only had $25 million of Goldman Sachs’ money to dish out, the nonprofit within 24 hours received requests for $1.6 billion of loans with easy terms, Barrera said. The average request was for $50,000, she said.

Initially, Goldman Sachs spokesman Patrick Scanlan declined to say through what entities the rest of the bank’s subsidy to Texas small business would be funneled. Later, though, Scanlan confirmed city governments in Houston and Dallas each would receive $5 million. He declined to say who would get Goldman Sachs’ remaining $15 million.

On Wednesday, the Dallas City Council is expected to take up a small business relief proposal that would meld the $5 million from Goldman Sachs with $5 million of federal community development block grant funds. If approved, the plan would divide the $10 million equally between loans and outright grants.

To qualify, businesses would have to “demonstrate a 25% reduction in business as a result of the COVID-19 pandemic,” Eric Anthony Johnson, the city’s chief of economic development and neighborhood services, told council members in an April 6 memo. Recipients must promise to keep four-fifths of the workers they had as of Feb. 29.

Only “low-to-moderate income microbusiness owners” could apply. They would be defined as having five or fewer employees, including the owner; or having a workforce in which low- to moderate-income employees comprise a majority. The maximum grant would be $20,000. Loans would top out at $50,000.

Other new programs aim to support women entrepreneurs. Davis, the speaker’s bureau owner, said she’s sought one of 100 grants of $10,000 being offered by Texas Woman’s University and one of 1,000 grants of $5,000 sponsored by Spanx clothing line owner Sara Blakely’s Red Backpack Fund.

Cox, whose Lakewood company installs polished concrete floors in homes and commercial buildings, said he was glad to hear local governments are trying to supplement the federal program.

But both are puny next to the need, he said.

Demand for floors has plummeted, Cox said. He’s lowered prices by almost half to secure just enough work to keep his seven installers on the job. They make an average of just more than $70,000 a year, though with no benefits, he said.

“My big thing is trying to keep these guys with families with a paycheck,” he said.

Recent bids cover only their wages and materials, said Cox, who’s eating into savings to cover other overhead. Cox said he has no work for five other contract employees he used to keep busy.

Craftsman Concrete Floors can stay afloat, he said, especially if he borrows.

“I feel reluctant to take money out of any of these pools,” he said of the local government efforts. “My business is solvent, right? Some of these other businesses such as bars and restaurants are never going to be heard from again.”