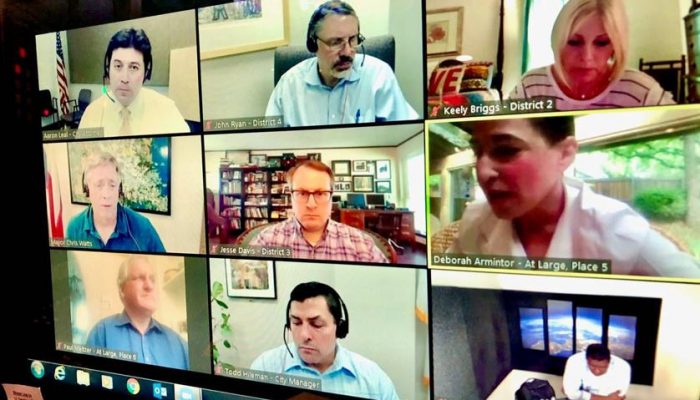 The Denton City Council split 4-3 in approving a set of agreements Tuesday night that allow developers of Cole and Hunter Ranch to finance the project with special taxing districts. But the council voted unanimously to accept a conservation easement that protects Pilot Knob Hill as part of the project.

The approvals mean future home and business owners will likely pay an additional 55 cents per $100 valuation in district property taxes, above and beyond school, county and city taxes.

A half-dozen people either submitted online comments or called in to oppose the project. Three other people called in and waited to speak to during the council’s virtual meeting.

Eric Pruett told council members that he was concerned about the ratio of private to public investment in the project, particularly in the wake of the COVID-19 pandemic.

“We are likely entering a recession,” Pruett said.

But the council majority was not dissuaded. City Manager Todd Hileman told council members that the city’s analysis of the project — which could take 40 years to bring 15,000 new homes and businesses to the west side — factored in the possibility of recession.

Hileman said none of the agreements require the city’s current taxpayers to front money for public infrastructure for the developments to get off the ground. The city applied lessons learned from both the Robson Ranch and Rayzor Ranch developments in negotiating all the agreements.

“There are no subsidies in this project,” Hileman said.

Over the life of the project, the city expects more than $860 million in net benefits from the subdivisions, primarily because the homes built there would have higher valuations than current average home value.

To secure the deal, the developers, Stratford Land and Hillwood, agreed to 500-foot setbacks from old gas wells on the ranches and to create a conservation easement for Pilot Knob Hill.

Council member Jesse Davis called the conservation measure a win for the city, since the hill and acreage around it will be open to the public and accessible by walking trails.

Earlier in the afternoon, council members agreed to ask Texas Gov. Greg Abbott to consider a different date for the municipal election. They also took the lead in calling for a special session of the Texas Legislature to address the COVID-19 pandemic.

City leaders called an emergency session Tuesday to adopt a resolution calling for the special legislative session, even though they were unsure the governor would do so.

“It seems quite unlikely, but it’s a gesture,” said council member John Ryan.

Council member Paul Meltzer first proposed the resolution during the council’s emergency meeting Monday. The governor’s emergency powers don’t grant the authority to rewrite Texas laws that detail the eviction process. But the Texas Legislature could address the problem before the economic situation worsens, Meltzer said.

The city’s resolution notes that many people have lost their jobs through no fault of their own and must wait for federal benefits to arrive before they can pay their bills. A new law could give tenants a chance to catch up with rent.

“The simpler we keep it, the better,” Davis said.

Council member Gerard Hudspeth said he would vote for the resolution, but he wanted to register his disagreement that it does not address concerns of property owners.

“We have property owners who are hurting as well,” Hudspeth said. “We’re not closing that loop.”

Council members said they hoped the resolution could be shared with Texas Municipal League so that other cities might also consider calling for a special session.

During the council’s regular meeting, they agreed to ask for a new election date at the end of September. The resolution is scheduled for formal adoption at the council’s April 21 meeting.