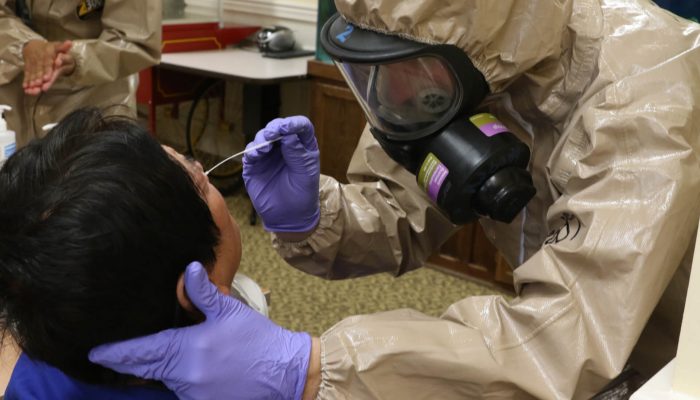 The data was hotly anticipated.

But less than 24 hours after the federal Centers for Medicare & Medicaid Services released the names of nursing homes with COVID-19 cases, it became clear there were problems.

Case numbers for Virginia showed a sharp discrepancy with data from the state’s Department of Health. The dataset showed no information for 29 facilities. And one of the worst-ranked nursing homes in Virginia for COVID-19 deaths — a county-owned facility with a four-star rating from CMS — said the agency made a grave error in reporting.

According to the CMS database, Bedford County Nursing Home had experienced a total of 90 coronavirus deaths — a fatality for each of the facility’s certified beds. But in a statement issued hours after the agency’s data release, administrator Paul Poff assured families and residents that Bedford had no confirmed cases of coronavirus, and certainly no deaths.

“We have double checked our reporting and have verified it was reported correctly on our end,” Poff added in an email to the Mercury on June 5. “I am unsure why this data is wrong. We are hoping the next CMS update will reflect our accurate information.”

Without consistent federal data, families, residents and advocates for Virginia’s 287 licensed nursing homes remain largely in the dark about a pandemic that’s had an outsized effect on some of the state’s most vulnerable residents. Virginia health officials have repeatedly declined to release the names of nursing homes with COVID-19, citing a section of state code that defines corporations as “persons” with confidentiality rights.

Health Commissioner Dr. Norman Oliver confirmed Tuesday that VDH was unlikely to budge on its position. “At this time, we are not reconsidering that policy,” he said at a news briefing, pointing out that CMS was scheduled to release its own information in the near future.

But even before the agency released the new dataset on Thursday afternoon, CMS officials acknowledged there were likely to be discrepancies. Some come down to reporting. VDH, for instance, reports the total number of COVID-19 cases at long-term care facilities, a category that includes nursing homes and assisted living centers. By the department’s reporting metrics, Virginia has had 5,183 cases of the virus at senior living facilities. CMS data, which only includes nursing homes, lists a total of 1,443.

“VDH is not responsible for validating the CMS data,” VDH spokeswoman Maria Reppas wrote in an email on Saturday. “At this time, the State Health Commissioner will continue reporting outbreak information in long-term care facilities to the general public at an aggregate level only.”

But at least for the next several weeks, it’s unlikely that federal data will provide a comprehensive view of the total number of cases within Virginia’s nursing homes. Reppas pointed out that CMS’ definition of “confirmed” and “suspected” COVID-19 cases differs from the one used by VDH, making it more likely that there will be discrepancies between the two reports. Twenty-nine facilities across the state also don’t have data registered with CMS, an issue the agency says it’s working to rectify. In a conference call on Thursday, officials also acknowledged that CMS withheld three percent of the data as the agency works to resolve reporting issues with specific nursing homes.

“As with any new program, some facilities are going to struggle as they come online and there are going to be honest errors in data entry,” CMS administrator Seema Verma said. “That being said, we’re working on quality control in terms of the data. If we see discrepancies, we’re communicating directly with the nursing homes to try to address that.”

In a statement Monday, the Virginia Health Care Association-Virginia Center for Assisted Living — an industry group representing 345 of the state’s nursing homes and assisted living centers — added that some facilities were experiencing issues in submitting information to federal agencies.

“Many of our member facilities received notices even as recently as this week that while their accounts in the [Centers for Disease Control and Prevention] system were registered, they were not active,” CEO Keith Hare said in the statement. “This system delay prohibited them from uploading their data.”

More significantly, CMS gave nursing homes the choice of whether to submit a cumulative total of COVID-19 numbers since Jan. 1. Agency officials acknowledged that while some reporting extended back to the early days of the pandemic, an unknown number of facilities only logged cases that emerged since early May, the date when CMS finalized its new reporting rule.

The CMS database gives no indication of which facilities submitted cumulative numbers, and agency officials repeatedly stated it would be difficult to provide the information. At least some nursing homes in Virginia appear to limit their reporting to May. Canterbury Rehabilitation and Healthcare Center in Henrico, for instance, reported a total of two COVID-19 deaths for the week ending in May 31. But medical director Dr. Jim Wright has confirmed in previous interviews that a total of 51 residents died from the disease.

“It’s going to be comparing apples to oranges to pineapples because of the different parameters of the data,” said Amy Hewett, the vice president of strategy and communications for VHCA-VCAL, in an interview on Wednesday.

Cumulative data from the Virginia Department of Health makes it clear that COVID-19 has had a devastating impact on the state’s senior living centers, with just over 56 percent of the state’s total 1,453 deaths linked to long-term care facilities, as of Friday.

While CMS data makes it possible to rank nursing homes by case and death numbers, the Mercury is not providing facility-specific information without further corroboration due to errors in the federal dataset.

But confirmation from two of the state’s worst-ranked nursing homes in terms of COVID-19 deaths shows that even highly-rated facilities aren’t immune to the virus. Birmingham Green, a five-star CMS rated facility in Manassas with high marks in health inspections, staffing, and quality of resident care, tied at 20 deaths with Luray’s Skyview Springs Rehab and Nursing Center — a one-star rated facility with a staffing shortages and a history of higher-than-average health deficiencies.

Skyview Administrator Jill Irby told the Mercury that the facility was reporting its cumulative deaths since January. In a statement sent to the Mercury on Friday, Birmingham Green acknowledged that its CMS data only extended to early May. “Since the beginning of this pandemic, we have experienced 33 deaths in our nursing care unit,” the statement reads.

The correlation between compliance history and COVID-19 has been a subject of sharp debate since a preliminary CMS analysis found that nursing homes with one-star ratings were more likely to have higher disease caseloads than those with five-star ratings. Industry groups have pushed back against the analysis, citing researchers who say the size and location of a facility has more to do with disease spread.

“This whole situation with COVID-19 is new and nobody knows what the total outcome is going to be,” Irby said Friday. “I don’t think it’s based on anything at the facility. Each individual resident, the underlying health issues — all that makes a difference.”

UPDATE: This story has been updated to include comments from the Virginia Department of Health.

About the Author: Across Virginia, VA Patch