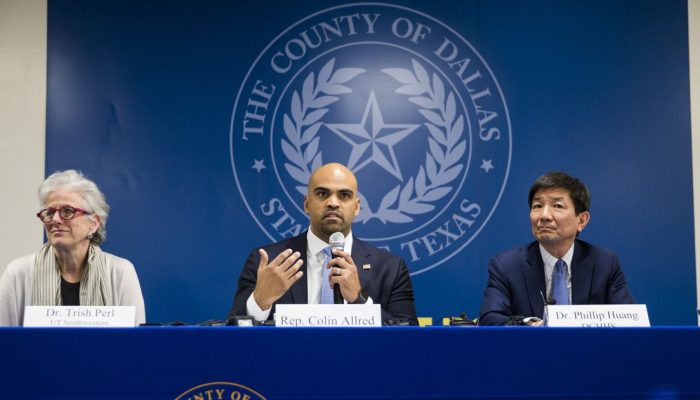 U.S. Rep. Colin Allred on Monday urged caution in reopening the Texas economy and risking the gains made in the fight against the deadly coronavirus.

Allred credited the vigilance of residents following social distancing guidelines for keeping area hospitals functioning smoothly and the number of infections and deaths below initial projections.

“The sacrifice that people have been putting in can’t be wasted,” he said.

On Monday Texas Gov. Greg Abbott unveiled his plan to reopen the Texas economy. Many businesses can open on May 1, including those in shopping malls. Other businesses, like barber shops, will have to open later in May, Abbott said.

Allred agreed that Texas should reopen in stages.

“I’m hoping that we can have a comprehensive plan that we will move in stages to reopen, see how things are working,” he said. “And then, if we have to, we might have to take steps back, but it just can’t be a situation where we say ‘OK, all the restrictions are lifted.’”

But the Dallas Democrat said residents are not confident that the fight against the coronavirus was at a point where people could return to normal. He called for increased testing and contact tracing, adding that numerous people needed to be hired to trace the contacts of people infected by the virus.

For now, he didn’t think the economy would fully reopen in the short term.

“That’s not going to happen for a lot of reasons, but the biggest reason is because people don’t have the confidence to get out there and engage in the economy,” he said. “My mom is a breast cancer survivor. She’s in her 70s. She’s not going to go out to where people are gathering if she thinks she may catch COVID-19 and it will be disproportionately lethal for her.”

Allred said he expected more federal relief packages and was hopeful that the money would get to small businesses and not publicly traded corporations.

Meanwhile, Dallas business executive Genevieve Collins, Allred’s opponent in the November general election, said Monday that reducing the risk of coronavirus infections should be balanced with getting people back to work.

“I believe there are reasonable steps we can take to responsibly reopen and lift some restrictions,” Collins said. “This will allow North Texans to get back to some sense of normalcy, even if our new normal is wearing masks and gloves as well as social distancing.”

Collins called on area leaders to develop a “multiphased plan” to restart the economy.

“This is a time where we need leaders to work towards efficient, productive and safe solutions … not to spread fear or delay crucial funding to the community who needs assistance the most,” she said.