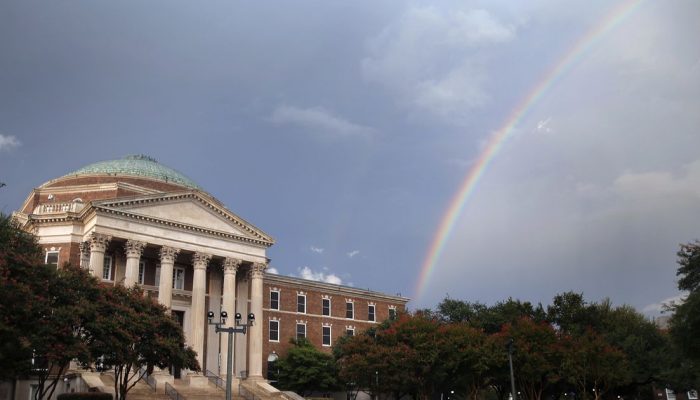 
Remote learning, the loss of extracurricular activities and campus camaraderie, canceled and postponed commencements — coronavirus drastically changed college life during the spring semester as campuses were shut down from coast to coast and beyond.

None of it has been easy.

Some students abruptly returned to their parents’ homes. Others remained at faraway campuses. And some labored on the front lines of the pandemic as essential workers.

Here’s how several North Texas college students coped during the semester that recently wound down:

Andrew Nakatsuka’s schedule shifted radically when he returned to his hometown of Honolulu, Hawaii, after Southern Methodist University shut down in-person classes.

For Nakatsuka, the location change meant that there was more than 3,700 miles separating him from Dallas. The 21-year-old junior majoring in chemistry and biology had to wake up well before the crack of dawn in the Aloha State to make up for the five-hour difference between Dallas and Hawaii.

“I usually get up at 4 a.m. and then take a pre-workout because it kicks in much faster than coffee, and that way I can be actually somewhat alert during class and learn,” Nakatsuka wrote in an email.

“I have class until 9 a.m. and then I usually fall asleep again for a few hours and start studying again in the afternoon.”

To complicate matters, his family home was gutted by a fire a year ago, so the family, including his three older brothers, is living in a two-bedroom apartment.

“I’m sleeping on an air mattress in the middle of the living room six feet away from my brother, so when I wake up, I have to watch class in the dark with headphones so I don’t wake him up,” Nakatsuka said.

Even with the difficult changes, Nakatsuka, whose goal is to become a cardiologist, is staying optimistic. He’s grateful for the time to reconnect with what matters most.

“I’m the youngest, so when I was in high school my brothers were away in college,” Nakatsuka said. “This is the first time everybody’s been home for an extended period of time.”

Half a world away, Dallas native Shaina Adelman deliberately decided to stay put at Bangor University in Bangor, Wales, in the United Kingdom.

“My dad and my sister are both considered high-risk for contracting the virus,” said Adelman, 20, a first-year student who is studying English literature. “A lot of it came down to protecting them and myself. I didn’t want to imagine how bad it could be if I were to go live with one of them.”

Prime Minister Boris Johnson — who contracted the virus himself — locked down the U.K. in March, implementing strict measures to keep residents indoors.

Adelman said the hardest part is being without family and friends.

“The first few weeks were really tough,” she said. “It’s lonely being stuck in a foreign country during such a traumatic time. I talk to my dad more than he probably wants me to.”

She said she originally decided to study in Wales because scholarships made it affordable and the curriculum focused more on topics that interested her.

Adelman said once the lockdown is lifted, she will look for a part-time job. Her father, Avi Adelman of Dallas, said he plans on visiting her as soon as he can.

When the pandemic began to sweep through the nation, University of Texas at Arlington student Jaelene Luper was already a full-time online student pursuing a degree in broadcast communication. But the current Miss Grapevine still had a big question to answer: How do you compete for Miss Texas and serve the community in the world of coronavirus?

“I’ve had to retrain myself,” said Luper, 21. “Now I’m trying to figure out how I can be the best title holder I can possibly be, without being within six feet of people.”

Her focus is on fighting hunger. She normally spends some of her free time volunteering at the North Texas Food Bank, but the pandemic has forced her to get creative.

“There is a senior care facility in Plano that normally gets food delivered to them, but that’s been disrupted by COVID-19,” Luper said. “So I’m doing a virtual canned food drive for them.”

The drive, Serve our Seniors, allows people to sign up for times to place canned food items at their curb, which will then be picked up, disinfected, and delivered to the senior care facility.

She’s also getting ready for the Miss Texas competition, in whatever form it takes.

“Now I’m looking at wardrobe items online, practicing my talent, and just practicing the things I can,” Luper said.

Alexandra Everbach, 19, will always remember how her first year at Tufts University outside Boston ended. She recalled a normal day of classes, and rumors flying around campus that it would shut down.

“Some people thought spring break would just get canceled and we would have to stay on campus to prevent the spread,” she said, “But the email was sent out and everyone was shocked.”

She said it was difficult to leave mid-semester — she’d just begun to adjust to a new environment away from her native Dallas.

“The second semester is when I really settled down and established myself, but now I feel like I’m back in high school again, without actually going to high school,” said Everbach, who is now back home.

Everbach, who plans to double major in English and theater, was part of Tufts’ theater program and was cast in two shows during her first year. She hopes she can return to campus next fall.

“If they do online classes, I’m going to have to see the changes they make because it’s harder to learn online,” she said.

Jordan Crosby, 21, was already an online student this spring, so the arrival of coronavirus didn’t much affect his studies at the University of Texas at Dallas, where he is a communications major.

But his life has changed. As a clerk at the neighborhood Walmart in Sachse, he’s an essential worker.

“The store was constantly out of things such as paper products, dairy products, eggs — a lot of the things people see as necessities,” Crosby said of the early weeks of the pandemic. Panic led to a decline in the stores’ stocked items.

And people’s compassion for others.

“People were constantly trying to hoard items and it was hard to have to be the ones who had to limit how much customers could buy,” Crosby said.

He was forced to weigh his priorities, including his and his family’s safety and health.

“I was very hesitant about staying. Being exposed to so many people a day is stressful to say the least,” Crosby said.

But, he said, people quickly adjusted.

“As time went by our store started to take more precautions to protect both the customers and the employees and this has given me so much peace,” Crosby said.

“I’ve seen people around me initiate with others and look for ways to serve other people like never before,” Crosby said. “It’s been amazing to see the shift in people’s attitudes toward helping and being a community together.”