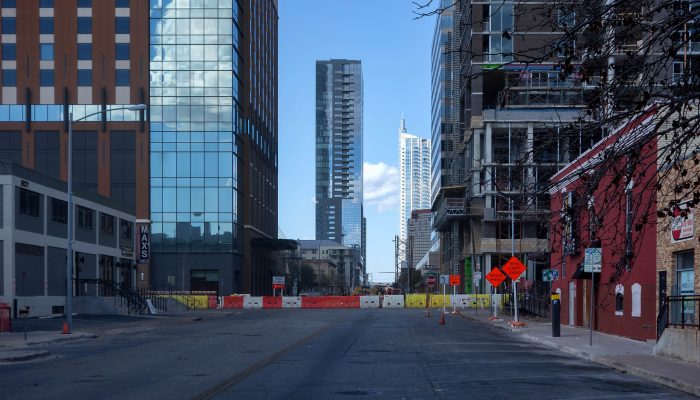 As the county’s May 8 end date for its stay-at-home order draws near, the Commissioners Court began to discuss the next steps in the battle to flatten the curve.

“There is no return to ‘normal,’” County Judge Sarah Eckhardt said at Tuesday’s meeting of the Commissioners Court. However, she did say there must be an end to the isolation measures taken by the city and the county. To achieve this reentrance of people into society, she explained that the proposed adaptive strategy will involve a targeted, restricted approach called the “hammer and the dance.”

The term, coined by Tomas Pueyo, refers to an ebb-and-flow technique in which the county will gradually allow some easing of social distance regulations while looking for signs of increasing cases of Covid-19. If cases are on the rise, government officials can respond by toning down commerce and increasing social distancing so as not to threaten the capacity of the health care system.

“The longer that we can draw this out, the better chance we have of identifying treatment strategies that work,” Austin-Travis County Interim Health Authority Dr. Mark Escott told the commissioners. Per White House criteria, he said this approach can be implemented after 14 days of declining case data, including hospitalizations.

This approach is an intermediary solution until a vaccine or treatment for the virus is available, which Escott estimated will arrive on the market early next year. In the meantime, he said, “We will be under substantial modifications for at least a year.” Those modifications include continued social distancing, widespread use of face masks, various adaptations by businesses to make interactions safe, and the use of occasional quarantine.

Without this oscillation between “normal” life and periodic restrictions on social interactions, there remains a risk of spreading the coronavirus at a rate that will overwhelm hospitals.

Another option that has been thrown around in recent weeks is herd immunity. However, Escott said achieving herd immunity would require 750,000 Travis County residents to contract the disease. With the current mortality rate of 2.2 percent attributed to the virus, that would result in 16,000 deaths, according to Austin Public Health data cited by Escott.

“It’s a horrible balance,” Commissioner Brigid Shea said. “(But) we don’t have the tools.”

Testing in Travis County is still limited despite a recent increase in available test kits. Texas Health and Human Services data show 8,386 individuals had been tested as of April 13. Although Travis County has the highest testing rate per capita of Texas counties, Escott told commissioners it’s not enough. Ideally, Travis County should distribute 1,842 tests per day. This recommendation was based on a report from Harvard University.

“I do not think that we are in a situation where we should be assuring the public we have enough testing capacity right now. We don’t,” Escott said.

The county is working to ramp up not only its access to testing but the number of partners distributing tests. To do this, Austin Public Health will soon roll out its Austin-Travis County Covid-19 Public Testing Enrollment Portal, through which area residents will submit a form to determine their eligibility for Covid-19 testing. The system will then allow people to schedule a drive-thru testing appointment and provide a portal to check test results.

According to Dr. Escott, this will increase testing capacity for the city and the county to 2,000 tests per week.

Even with access to more tests, commissioners emphasized that reducing transmission of Covid-19 depends largely on individual vigilance and a controlled reopening of daily life. “This is not going to end soon and we can’t be planning to have these huge gatherings all over the globe,” Shea said.