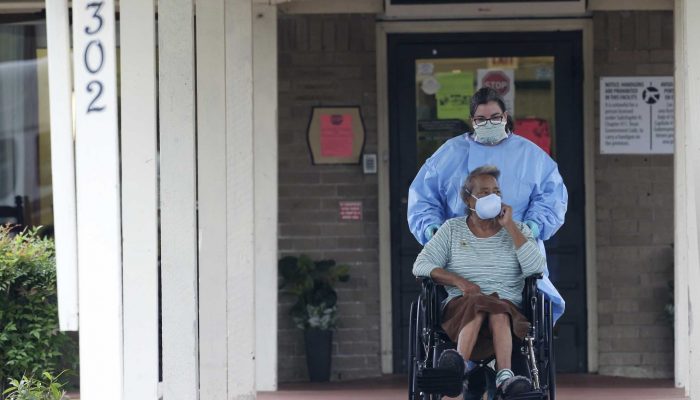 The number of confirmed coronavirus cases in Bexar County has surpassed the 500 mark and shows no signs of slowing down.

That increase was apparent on Tuesday when officials announced 47 new coronavirus cases had been confirmed in the past 24 hours. Six new deaths related to the virus were publicly disclosed Tuesday, bringing the county’s death toll to 18.

“These next few weeks will be difficult,” said San Antonio Mayor Ron Nirenberg. “As we test more people, we are seeing more confirmed cases of COVID-19. That’s the reality.”

Earlier Tuesday, Metro Health officials reported that five more residents of a Southeast Side nursing home who had tested positive for the virus had died since Sunday, while another woman not connected to the facility also succumbed to the illness.

Confirmed COVID-19 cases totaled 503 as of Tuesday, Nirenberg said at the daily briefing.

Of those, 150 patients were infected by community transmission, while 179 cases were attributed to “close contact,” such as catching the virus from a family member. Travel-related cases totaled 124, while 50 cases remain under investigation, meaning the source of infection hasn’t been determined.

Nirenberg said 88 patients were hospitalized as of Tuesday. Of those, 51 remained in intensive care, while 40 were on ventilators.

So far, 77 patients have recovered from the coronavirus, the mayor said.

The five residents who died at the nursing home since Sunday showed no symptoms of the coronavirus, but all of them had tested positive, city officials said. All of those residents had underlying medical conditions. One was in her 70s, while three were in their 80s and another was in her 90s.

The woman not connected to that nursing home who also contracted the coronavirus died Sunday at Northeast Baptist Hospital, city officials announced. That woman was in her 60s and had underlying health issues.

Comal County officials reported five new cases of the coronavirus, bringing the total number of cases there to 27. The latest cases aren’t concentrated in a specific area, but are found at various points across the county — two in the eastern portion of Comal County, near the Hays County line; one in New Braunfels; one south of Canyon Lake; and one in the center of the county.

Two of those patients are hospitalized in New Braunfels, Comal County authorities said.

Two of Comal County’s newest cases were attributed to travel, while the other three are still under investigation.

“It’s clear from numbers like this that Comal County is still in the acceleration phase of this virus,” said Cheryl Fraser, Comal County’s director of public health. “It remains vitally important that all county residents follow the county’s Stay Home-Stay Safe order and limit their exposure to COVID-19.”

In Kendall County, the home of Boerne, the total number of cases stands at nine. Six of those patients have recovered, while three are still sick. No deaths have been reported there.

In Atascosa County, the home of Pleasanton, a fifth case of the coronavirus was reported Tuesday. The newest patient is experiencing mild symptoms and is isolated at home, according to a Texas Health and Human Services press release.

One of the five cases in Atascosa County — a case reported Monday — involves a patient hospitalized in Bexar County. That case resulted from community spread of the virus, according to another Texas Health and Human Services press release posted on Atascosa County’s COVID-19 Awareness website.

In Wilson County, the home of Pleasanton, eight cases of the coronavirus have been reported. Two of those patients have recovered. Seven of those cases were attributed to travel, while one was the result of community transmission, according to a post on the county’s Facebook page Tuesday.

Across Texas, a total of 8,262 cases of the coronavirus have been reported, while 154 patients had died as of late Tuesday morning. Among those infected, 1,252 patients are currently in Texas hospitals, according to a website that state health officials update daily.