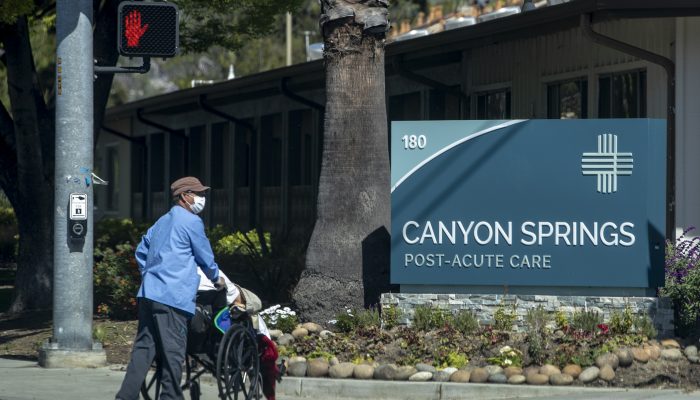 
A San Jose nursing home with one of the first reported outbreaks of the coronavirus in an elder care facility is now on the verge of reaching 100 combined infections among patients and staff.

Canyon Springs Post Acute Care first notified patients’ families the last week of March that two patients and an employee had become infected with the virus. The disease has since spread through the facility, and now 99 people have tested positive for COVID-19 and five patients have died, a spokesman confirmed in an email. The 198-bed facility had 17 positive cases and no deaths three weeks ago.

As of Monday there were 364 infections spread across 20 skilled nursing homes in Santa Clara County. A total of 36 people have died in nursing homes in the county, according to the county’s health department. The department has so far refused to name the facilities where the deaths occurred, or the number of deaths at each. The county also reported 11 cases of COVID-19 across seven assisted living facilities, but it does not specify the number of infected people for each facility. There have been no known deaths.

Other Bay Area counties have refused to update their cases for nursing homes and assisted living facilities since the state began releasing limited information earlier this month, which leaves the public with an incomplete picture of serious outbreaks, cobbled together by county and state information and reporting by news agencies.

Contra Costa County has refused to provide numbers for Orinda Care Center since April 17, when the nursing home had 53 cases and five deaths.

The state Department of Public Health, which regulates skilled nursing homes, last released updated information on infections on April 22, and refused to provide updated numbers on those facilities on Monday. It provides a total cumulative death toll for the state, but does not break it down by facility.

“We will always adhere closely to the state and federal laws that protect the privacy of patients,” an unnamed state health department spokesperson wrote from a department email address Monday. Transparency and nursing home care advocates have called that policy overreach, saying the release of cumulative numbers in no way impacts patient privacy.

A spokesman for an Oakland nursing home, Excell Care Center, that reported last week 36 cases and three deaths, said those numbers had not changed as of Monday.

The state Department of Social Services, which regulates care homes that don’t provide skilled nursing, is updating information on assisted living facilities more frequently, although it continues to withhold details on deaths by facility.

An assisted living facility in Redwood City, Gordon Manor, where at least 10 people have died of Covid-19, including a former president of Stanford University, has more cases than reported last week, according to data released by the state on Monday.

There are 23 residents who have tested positive for the virus. There were 20 patient cases there Friday, along with seven staff, the facilities manager said.

Another Atria facility, Atria Burlingame, had five patient cases and two deaths last month but is not included on the state list.

In Contra Costa County, Pleasant Hill’s Carlton Senior Living Facility — formerly known as Chateau III — has 61 confirmed cases of COVID-19, according to the updated state list. The positive cases include 36 residents and 25 staff members. The last know number of deaths there was five.

The Department of Social Services has refused to breakdown deaths per facility. It revealed only that across the state as of April 25, 144 residents of assisted living facilities have died of COVID-19 — an increase of 25, and there were at least 1,146 positive cases of COVID-19 among residents or staff.

Please help us shed light on senior care by providing details by scrolling down and filling out the form below or email us at seniorcareinquiries@bayareanewsgroup.com. Your information will reach reporters who are covering the impact coronavirus is having on nursing homes and assisted living facilities. You can also leave a phone message at 510-208-6458. Thank you for your help.