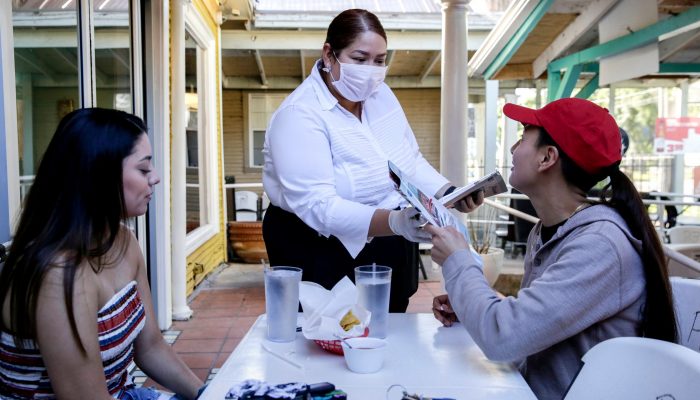 It’s highly unlikely the United States will reach zero cases of COVID-19 without a vaccine. Even so, some activities will likely be able to resume.

Take Minnehaha County in South Dakota, where more than 2,100 positive cases have made it a hot spot for the novel coronavirus. Just east, across the border into Minnesota, Rock and Pipestone counties report only a handful of cases.

Along Louisiana’s western border, De Soto and Caddo parishes report hundreds of COVID-19 patients. Yet numbers suggest the virus has barely crossed into counties over the Texas line.

A USA TODAY Network analysis of COVID-19 case counts found similar disparities along Pennsylvania’s northeast border with New York, at the corner connecting Wyoming and Utah and where Mississippi meets Louisiana. The analysis underscores the reality that flaws with testing and accurate case reporting has resulted in unreliable data that can give the false impression that certain areas are less affected by the virus.

Government officials cite the case counts as one of the factors in weighing a state’s ability to safely reopen against the risk of creating a spike in infections. Those decisions will be based, at least in part, on the faulty premise that each state tests and tracks the virus with the same diligence.

“Disparities in rates, literally across state lines, are not the work of magic shields,” said Jay Wolfson, senior associate dean of the Morsani College of Medicine at the University of South Florida in Tampa. “It’s about the dearth of standardized, accurate and consistent reporting by local and state governments.”

The Centers for Disease Control and Prevention said areas should make decisions about loosening restrictions based on a “data-driven, county-by-county approach.” Texas, Florida, Georgia and Oklahoma are among the states that started to allow nonessential business to reopen.

Each state’s reporting standards and test capabilities vary, and even counties within the same state can differ.

Public health officials warn the virus has probably swept into many of these communities where numbers indicate otherwise. They fear artificially low counts will give government officials and residents a false sense of security about reopening and venturing out of self-quarantine.

“We don’t have a good sense of how many people are affected,” said Jorge Salinas, epidemiologist and clinical assistant professor of infectious diseases at the University of Iowa. “There are more cases than what is officially reported.”

Data dive: Spike in US deaths and cases flagged as pneumonia suggests even greater COVID-19 impact

The test that wasn’t: How federal officials misled state scientists and derailed the best chance at containment

The differences in reported coronavirus activity along the Texas and Louisiana line were among the widest in the country.

One Louisiana parish had more reported cases than the combined 250-mile stretch of Texas from Cass County south through Jefferson County.

Including an outbreak last month at a Tyson chicken processing facility in East Texas, those nine Texas counties hugging the Louisiana line reported a total of 813 positive cases May 3.

More than a dozen highways and other roads connect the two states. To limit travel back and forth, Texas started screening vehicles in early April on all major roads leading to Louisiana. Those travel restrictions were lifted Friday.

Dayana Solia takes menus from customers Lexie Belche, left, and Aleza Ruiz at Juan in a Million on East Cesar Chavez Street in Austin, Texas, on May 1. Ruiz called the restaurant at 7 a.m. to see if it was open after Gov. Greg Abbott ordered the gradual reopening of Texas businesses amid the coronavirus outbreak. All retail stores, malls, restaurants, movie theaters, libraries and museums must limit customers to 25% of their listed occupancy. (Photo: Bronte Wittpenn, Austin American-Statesman / USA TODAY Network)

East Texas health officials could not explain why their COVID-19 counts were so much lower than Louisiana’s, which shares many of the same dynamics as their neighbors.

“Is it the rural area? Or are we just doing a good job? It’s hard to know,” said Jerry Howell, administrator of Sabine County Hospital in East Texas. “We’re doing a lot of what every county is.”

One reason for Louisiana’s higher counts is that the state tests at more than twice the rate per capita, according to a USA TODAY collection of data from the COVID Tracking Project. Texas has the second-lowestrate in the nation, trailing Kansas. That means potential carriers are more likely to be missed in official state counts.

The nine East Texas counties administered 5,764 tests, according to state records. The seven parishes in Louisiana that border them administered 23,810 tests, or about four times as many.

Of Texas’ 254 counties, nearly one in five have not confirmed a single coronavirus case, according to state data.

“It boils down to testing,” said Catherine Troisi, an infectious disease epidemiologist at UTHealth School of Public Health in Houston. “There are cases that just aren’t being tested and reported. It just points out why testing is so important. It’s the eyes of epidemiologists.”

The state reopened restaurants, retailers and theaters with limited capacity Friday. Texas Gov. Greg Abbott’s office did not respond to calls for comment.

East Texas health providers “assumed it would travel over state lines, and they’d be overwhelmed by now,” said John Henderson, president and CEO of the Texas Organization of Rural and Community Hospitals. “And aside from a few hot spot areas, we don’t seem to be seeing that.”

Minnesota’s Rock County is a farm community of almost 10,000 people living among fields of flax, corn and soy. By the numbers, the county is among the quietest in the nation for coronavirus activity.

Directly to the west, COVID-19 spread through a Smithfield Foods pork processing plant in Minnehaha County, South Dakota. More than 2,100 people tested positive for the virus, and the meatpacking facility shuttered this month. The governor declared a public health emergency in the county, asking the CDC to bring in a team to help with mitigation.

Though much of the initial spread came from Smithfield workers, the virus is affecting other areas of the community, including people with no direct ties to the plant, South Dakota state epidemiologist Joshua Clayton said during a media conference call Thursday.

Experts said it would have been no surprise to see the virus leak across the border into Rock County, where some residents commute over the state line into South Dakota to work in the Smithfield plant. Others work at another meat processing facility in nearby Worthington, Minnesota, which is also grappling with an outbreak.

Official counts show just 19 positive cases in Rock and Pipestone counties. But officials in the southwest corner of Minnesota said residents in the two areas are getting sick with COVID-like symptoms.

Providers said more testing is the best way to track and curb the spread of the virus. Minnesota faces shortages of diagnostic tests, and priority is given to residents of long-term care facilities, health care workers, vulnerable populations, those with underlying conditions and meat workers, state Department of Health spokeswoman Julie Bartkey said.

As of May 3, South Dakota’s per capita testing rate was 42% higher than Minnesota’s, according to the USA TODAY Network analysis.

“We felt the best way to mitigate the outbreak no matter where is to test everybody, regardless of symptoms,” said Mike Wilde, vice president and chief medical officer for Sanford USD Medical Center in Sioux Falls. “That way, any positives can be identified and isolated.”

Wayne County confirmed the first diagnosed case of coronavirus in Pennsylvania in early March, tracked back to a traveler from Europe.

Since then, the county’s numbers have grown to 109 cases but never reached the level of nearby communities in New York or even other areas of Pennsylvania.

For comparison, neighboring Sullivan County in New York reported 951 cases – which equals more than five times the COVID-19 rates per capita than Wayne County. Officials there cite its closer proximity to New York City and Sullivan County’s Orthodox Jewish community, which has been hit harder by the virus.

Orange County in New York – just on the other side of Sullivan – has more than 9,000 confirmed cases.

“We’re not a New York City suburb, but we’re New York City’s playground in many ways,” said John Liddle, Sullivan’s deputy county manager. “This is where people left the city to get away from yellow fever hundreds of years ago. … The virus goes where the people go, and that’s what we’re seeing.”

Experts said Wayne County’s proximity to bigger metropolitan areas such as New York City and Philadelphia should make it more susceptible to a COVID-19 outbreak than numbers suggest.

Many wealthy New Yorkers have weekend homes in that part of Pennsylvania, and they fled to these second homes to get away from the hot spot in the city. Because the data tracks county of residence, those New Yorkers are not counted toward Wayne County’s numbers, skewing the totals.

“We were really concerned that we could be hit hard, but we really haven’t been,” said James Cruse, medical director of Wayne Memorial Community Health. “We didn’t get this big influx like the other counties did.”

New York is testing at more than double the rate per capita as Pennsylvania. Cruse said access to testing is not a problem in Wayne County, where 18% of the COVID-19 tests are positive. There’s a mobile test site, and the hospital can return some rapid-response tests within an hour.

“We’ve been a little lucky here,” Cruse said. “We’re just far enough out (from New York City) that we weren’t hit that hard.”

About the Author: Josh Salman and Dan Keemahill