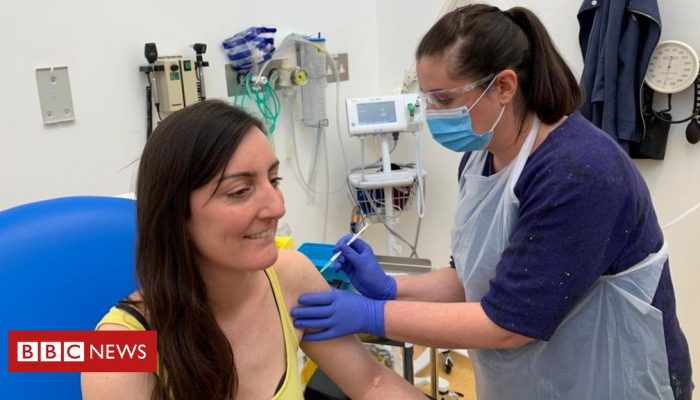 Media captionElisa Granato was the first volunteer to be injected

The first human trial in Europe of a coronavirus vaccine has begun in Oxford.

Two volunteers were injected, the first of more than 800 people recruited for the study.

Half will receive the Covid-19 vaccine, and half a control vaccine which protects against meningitis but not coronavirus.

The design of the trial means volunteers will not know which vaccine they are getting, though doctors will.

Elisa Granato, one of the two who received the jab, told the BBC: “I’m a scientist, so I wanted to try to support the scientific process wherever I can.”

The vaccine was developed in under three months by a team at Oxford University. Sarah Gilbert, professor of vaccinology at the Jenner Institute, led the pre-clinical research.

“Personally I have a high degree of confidence in this vaccine,” she said.

“Of course, we have to test it and get data from humans. We have to demonstrate it actually works and stops people getting infected with coronavirus before using the vaccine in the wider population.”

Prof Gilbert previously said she was “80% confident” the vaccine would work, but now prefers not to put a figure on it, saying simply she is “very optimistic” about its chances.

So how does the vaccine work?

The vaccine is made from a weakened version of a common cold virus (known as an adenovirus) from chimpanzees that has been modified so it cannot grow in humans.

The Oxford team has already developed a vaccine against Mers, another type of coronavirus, using the same approach – and that had promising results in clinical trials.

How will they know if it works?

The only way the team will know if the Covid-19 vaccine works is by comparing the number of people who get infected with coronavirus in the months ahead from the two arms of the trial.

That could be a problem if cases fall rapidly in the UK, because there may not be enough data.

Prof Andrew Pollard, director of the Oxford Vaccine Group, who is leading the trial, said: “We’re chasing the end of this current epidemic wave. If we don’t catch that, we won’t be able to tell whether the vaccine works in the next few months. But we do expect that there will be more cases in the future because this virus hasn’t gone away.”

The vaccine researchers are prioritising the recruitment of local healthcare workers into the trial as they are more likely than others to be exposed to the virus.

A larger trial, of about 5,000 volunteers, will start in the coming months and will have no age limit.

Older people tend to have weaker immune responses to vaccines. Researchers are evaluating whether they might need two doses of the jab.

The Oxford team is also considering a vaccine trial in Africa, possibly in Kenya, where the rates of transmission are growing from a lower base.

If the numbers could be a problem, why not deliberately infect volunteers with coronavirus?

That would be a quick and certain way to find out if the vaccine was effective, but it would be ethically questionable because there are no proven treatments for Covid-19.

But that might be possible in the future. Prof Pollard said: “If we reach the point where we had some treatments for the disease and we could guarantee the safety of volunteers, that would be a very good way of testing a vaccine.”

The trial volunteers will be carefully monitored in the coming months. They have been told that some may get a sore arm, headaches or fevers in the first couple of days after vaccination.

They are also told there is a theoretical risk that the virus could induce a serious reaction to coronavirus, which arose in some early Sars animal vaccine studies.

Work began on a vaccine in January

But the Oxford team says its data suggests the risk of the vaccine producing an enhanced disease is minimal.

Scientists there hope to have one million doses ready by September, and to dramatically scale up manufacturing after that, should the vaccine prove effective.

So who would get it first?

Prof Gilbert says that has not been decided yet: “It’s not really our role to dictate what will happen, we just have to try to get a vaccine that works and have enough of it and then it will be for others to decide.”

Prof Pollard added: “We’ve got to ensure we have enough doses to provide for those in greatest need, not just in the UK but also in developing countries.”

Media captionCoronavirus: What is a vaccine and how is one made?

Another team at Imperial College London hopes to begin human trials of its coronavirus vaccine in June.

The Oxford and Imperial teams have received more than £40m of government funding.

Health Secretary Matt Hancock has praised both teams and said the UK will “throw everything we’ve got” at developing a vaccine.

UK chief medical adviser Prof Chris Whitty has said neither a vaccine, nor a drug to treat Covid-19, is likely to be available within the next year.